When legal discrimination was abolished white institutions and communities, of course, did not simply welcome African-Americans with open arms. As Michelle Alexander explains in her powerful book The New Jim Crow (New Press, 2010; newjimcrow.com), maintaining racial inequality and segregation even in the face of formal equality requires disguised strategies of suppression. The criminal justice system is very well suited for that purpose. Convictions and incarceration are means to legally exclude a large segment of the black population from full participation in American Society without appearing to discriminate by race.  Stopping and searching people because they look “suspicious” while in a “high crime” area may be viewed by most people as good, proactive police work.  But historically and sociological speaking, it serves a similar function as overt racial segregation and targeting. These tools of exclusion are particularly pernicious because no conscious racist actors are required.  A black police officer who aggressively checks i.d.’s for warrants and makes drug arrests in the name of proactive policing likely has no idea that he or she is helping sustain relatively high rates of black unemployment. By a very clever sleight of hand, most Americans are convinced that behavioral choices (or maybe class differences) rather than unconscious or institutionalized racist practices explain colossal and anachronistic racial gaps in poverty and incarceration.

Of course, mass incarceration is a product of many forces, including many that had little to do with race.  After all, racism was even more virulent in the early 1970’s when incarceration rates were much lower than now.  In addition, white Americans are also incarcerated at alarming levels.  However, I strongly suspect that mass incarceration would not exist if there were no large black population that white America felt compelled to neglect, demonize, exploit or control. And the historical parallels between plantations and prison towns are too compelling to ignore. Prison towns, like plantations in the Old South, allow mostly white people to earn a decent (or excellent) living through the subjugation of mainly black and brown bodies.

There are many reasons to oppose the policies and practices that sustain mass incarceration.  I wrote this song in order to remind people of one major reason to oppose them.  They serve to perpetuate one of America’s greatest shames. These days are not behind us. Jim Crow lives on in disguise.
Posted by Paul Hirschfield at 9:40 AM No comments: 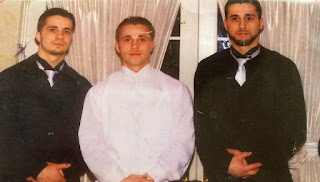 The narrative that victims are the perpetrators that is pumped out by the media is a centerpiece of the systemic justification of the incarceration of poor, working and oppressed people in New Jersey and around the country. Now in an elections year, the candidates who are vying to manage this system for the rich are promoting hate more and more each day. Gov. Chris Christie, who is running as a Republican nominee for president, has built his campaign on this and in particular anti-Muslim hatred. The fight to challenge the system that jails our people is not separate from fighting these campaigns based on racism and bigotry.

Please read my latest article that appeared in Liberation News on the case of the Fort Dix 5. Their freedom is part of the demand to decarcerate New Jersey. Ferik Duka, father of the Duka brothers, speaks at the demonstrations of supporters in front of the Camden Courthouse
More than 100 officers were dispatched to arrest those now called The Fort Dix 5 in a massive counter terrorist manhunt that targeted Dritan, Shain and Eljvir Duka and their two other co-defendants Mohamad Shnewer and Serdar Tatar in various locations in Cherry Hill, NJ, in 2007.
Republican candidate for U.S. President, NJ Governor Chris Christie—and known anti-Muslim bigot—prosecuted the original case.
The flaw in the convictions of these three ethnic Albanian brothers and their co-defendants, one Palestinian and one Turkish, is that they never even heard of the conspiracy that they are serving life in prison for. The so-called evidence is carefully parsed phrases gathered by FBI informants on a mission of entrapment.
“The philosophy that supports and encourages jihad around the world against Americans came to live here in New Jersey…” gloated Christie.
Yet, it should come to no surprise that a bigot like Christie who hates teachers and screams at child victims of hurricanes would also be bent on an anti-Muslim campaign to promote his philosophy encouraging racism and fear at the expense of locking up for life innocent immigrant Muslims living in New Jersey.
On Jan. 7, 2016, the three Duka brothers argued at a hearing at the federal court house in Camden, NJ, that they didn’t receive effective counsel and their court-appointed counsel convinced them to not testify at their trial despite the fact that they wanted to testify.
“Free the Dukas now! Free the Dukas now! Free the Dukas now!” shouted supporters at the Camden courthouse hearing—a hearing that was won due to the support for the Fort Dix 5 that confirms the bigotry of the courts and the politicians.
“My name is Zurata Duka. I am the mother of the three sons—Eljvir Duka, Dritan Duka and Shain Duka. My sons, you know, they are strong, but, you know, especially Dritan, he was for six years in solitary, and they was far away from me. It was very hard for me. And Eljvir, too, now he’s about two, three years in solitary there, you know. It’s like they’re making like a mental, you know—it’s not abuse, but it’s abuse by the brain. And it’s very, very hard for me to listen, to see my sons to suffer like this, when they are innocent,” said Zurata Duka to the supporters and the media in Camden.
The result of the hearing will be made known in March, but the need for growing action to support the Fort Dix 5 continues as the progressive movement stands with Muslim brothers against this extreme repression.
Posted by Unknown at 11:45 AM No comments: