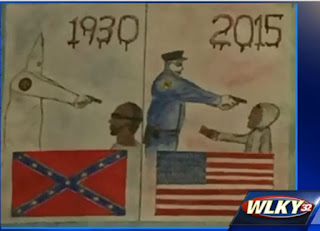 Every time there is some high school project where a student expresses a view outside the pro-cop paradigm – it raises controversy from the pro-cop guardians and often at the behest of police unions.  Here is a recent case in point, in Kentucky, not in NJ but the similar dynamic plays out – an art project expresses a view criticizing police shooting of Black civilians and then a big blowhard reaction results against the student views.  The good news in this case is the principal did not have the project taken down.
http://www.wlky.com/news/student-drawing-causes-controversy-at-north-oldham-hs/38169068

I visited this topic in an article last June regarding the police inspired repression of 3rd grade teacher (since fired) Marylin Zuniga – repressed by police union inspired outcry after allowing a few students to volunteer to write get well letters to Mumia Abu Jamal whose life has been endangered by Pennsylvania prison authority medical neglect and other police inspired actions against a humanities class assignment in South Jersey:

It seems the public schools will always be subject to this kind of pressure and it seems police are always able to kick up a firestorm of overly protective parental concerns that want to make sure their little Johnny is not exposed to any views in the schools that questions the status quo around issues of police impunity, mass incarceration and racial profiling in law enforcement.

So how about we figure out a way to provide a venue – across the whole state of NJ – in the windows and walls of community based organizations – on our internet outlets – in printed media – and on the public sound cloud to promote art, music, writing, etc. – by youth – that questions authority and challenges police impunity, mass incarceration, etc?  Seeking public space for a venue to exhibit such creations can also provide gounds for struggle – around public space at libraries and in public buildings.  And youth can be encouraged by our movements to express their dissent when the message from within the corridors of the schools is mixed at best.

Is it possible?  I believe so – there are enough justice seeking organizations across the state of NJ that have connections to students and working and unemployed youth.

I believe such a project – while it would be an undertaking – would have the potential for great success and can possibly help encourage expression among the youth which is often frustrated and confounded by the stale dictates of public school administrations as they fall under the influence of cop union big mouths and other blowhard guardians of youth conformity.

Any efforts needs to be inclusive as possible and include outreach across the walls into the incarceration facilities - both the juvenile and adult facilities.

Posted by Bob WItanek at 6:38 PM No comments:

On Cell Phones and Solitary Confinement

Cell phones in prisons.  Guess what?  It’s a thing!  Lots of incarcerated have them.  Lots of incarcerated use them to communicate with each other.  To post on Facebook.  To keep up with the outside.  To participate in internet radio programs and broadcast websites.  To urge their brethren and sistern to organize.  Or just to try to maintain some human connection.  Get over it.

And yes, some use them to pursue criminal activities as well.  But you know . . . if they are using their phones for that purpose – and since all cell communications are already monitored by federal agencies – it is the perfect way for agencies to monitor any such criminal activities.  So the existence of the cell phone should make controlling any said crimes by the incarcerated easier – not harder.

The presumption of the carceral state is that the public naturally would go along with the ideology that it is a horrible thing for incarcerated to possess and use cell phones and to participate in social media.  While there could be a strong tendency – as decarcerators we need to SHOUT THAT DOWN!  HELL NO!

“Tough on crime” rhetoric being used to pander to political base (and the base-ist of politics) has run its day.  The current rhetoric is for reform, reduction to incarceration rates.  (Most such rhetoric honestly – including both political parties – is more form – little substance – as the ranks of incarcerated continues to grow, the local enforcement priorities of minimalist offenses continues to proliferate, and the conjuring of new excuses to incarcerate – like establishment democrat Rahm Emanuel’s proposal to jail those who sell “loosey” cigarettes in Chicago for example – continue to proliferate.  But among at least sectors of the public, there is no longer a knee jerk reaction of support for tough on crime political pandering.

We need to apply this rejection to the idea that cell phones in prison are to be severely punished.   And the punishment can be quite severe.  I refer to the case of
http://thesource.com/2015/02/15/sc-inmate-receives-37-years-in-solitary-confinement-for-posting-facebook-status-update

From the linked article:

“Tyheem Henry received the harshest penalty to date. Henry was handed down 13,680 days (37.5 years) in disciplinary detention and lost 27,360 days (74 years) worth of telephone, visitation, and canteen privileges, and 69 days of good time for 38 posts on Facebook. Others such as Walter Brown, who received 34.5 years in solitary and lost 69 years of phone, visits, and commissary privileges, were handed down these sentences that have been termed “cruel and unusual punishment” by human rights organizations.”

Read that a couple of times and let that sink in.  37.5 years of solitary!

This is no isolated incident either:

“A report from the SCDC that was released earlier this month reveals that 432 similar cases were placed against 397 inmates since the“Creating and/or Assisting With A Social Networking Site” Level 1 offense was implemented in 2013..”

First off – solitary is torture and must end immediately.  While decarcerators should continue to press for abolition (in my case) or reform (if that is your view) – we need to be steadfastly united toward the immediate cessation of solitary – recognized as a form of torture internationally.

But we also need to reject the knee jerk reaction to cell phone use and social networking among the incarcerated.

The Decarceration effort that will be successful *must be led* by the incarcerated as they are most directly impacted by this form of modern day of enslavement.  It is the incarcerated that understand the issues better than any and are in the belly of the beast.  When incarcerated organize, cell phones are in play.  They are used to capture abuse by the corrections officials, to photograph inhumane conditions on the inside.  They are used by the incarcerated to organize, to communicate, to converse – with each other and with their families and supporters on the outside.  So as decarcerators we must reject these administrative and arbitrary rules that severely punish for cell phones and social networking.

In NJ we need a means to communicate with the incarcerated – to let them know about Decarceration efforts going on outside but also to find out about their organizing efforts on the inside and to let us know about the abuses going on inside so that we can demand an end to such abuses.  The means that the incarcerated use to communicate is for their choosing – not for us to decide.  We need to stand ready to oppose any such severe penalties as they are meted.
Posted by Bob WItanek at 2:43 PM No comments: