Some critical thinking on mass incarceration. 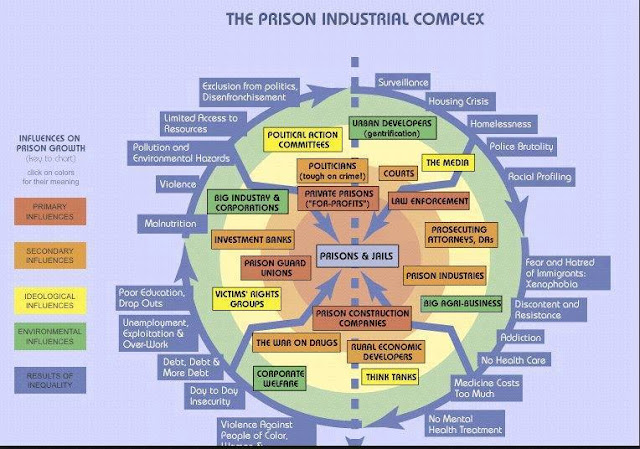 Some critical thinking.For the sake of argument lets go with the hypothesis that in 1865 the US wanted to keep slavery going albeit under a new name and new system. What would they need to put into place to make such a continuation work?Well 1st of all it would have to be legalized right?
The 13TH amendment covers that.

Secondly you would need a new designation for such "unfree" persons right? Something that already exists would be best so you could just "include" this new unfree person.
The term Criminals would work.

Next you would need a system that covers all aspects of this new enslavement under legal guise. From the initial "criminalization" via laws and codes that would allow a veritable army to simply gather bodies unopposed, (mass incarceration) and a way to carry these bodies from initial arrest through to incarceration right? Like an assembly line. (Courts)

You certainly don't want to give them trials because the entire setup is unjust so you would need to bypass the 6th amendment right?
It would look like it does now. 95% of all felony cases ending in an unconstitutional plea bargain forced upon a mainly minority population by a 95% white prosecutorial pool.

You would need facilities to hold them in mass quantities using as few resources as possible to keep them alive. (Prisons, detention centers and jails.) 1 in 8 prisoners in the entire world are African Americans.

Now you can't call them slaves anymore so people aren't born as slaves but they can damned sure spend time enslaved. As much time as possible so in this new form of slavery recidivism would be a key factor. Reusable resources.

You would also want to put in a safety feature for those whom the system is not meant to oppress that get caught in its grasp. So you would use economic advantages available to those with privilege. Bail, lawyers’ fees etc. Simply put the cost of freedom out of reach for the poor and make sure the population who are poor are dominated by those whom the oppression is aimed at in general. (Institutional racism and for profit justice)

And what about the people who jump through all the hoops. Serve their time. Become model prisoners and unavoidably earn an exit from enslavement? You would make it as hard as possible for them to stay out of prison by taking away any rights, privileges and limiting their opportunities for self-sustenance. (Collateral consequences) Thus herding them right back where they came from.

And how do you make this entire system self sustaining and perpetual? Well you would have to turn the communities of the targeted population into high crime, high poverty, low income areas and then send in your army to collect them at any time for any multitude of reasons. Generation after generation. Father to son, mother to daughter.

And how do you keep them there with limited escape options? Limit education opportunities. There was a reason blacks weren't allowed to read. Why it was literally illegal. Fredrick Douglas told us how that works and why its feared by your oppressor. Knowledge makes a man (woman or child) unfit to be a slave.

And there.... is how slavery can happen right under your nose every day and you would never think it wrong.

For a better understanding of the New Abolitionists movement we suggest watching
Slavery by Another Name PBS &  13TH  in that order.

For historical perspectives You can also read both Narrative of the Life of Frederick Douglass, an American Slave and Incidents in the Life of a Slave Girl If you want info right now in a short easy to understand video presentation try these poetic presentations.

Posted by Max Parthas at 5:29 PM No comments: