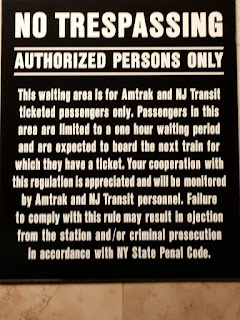 Yesterday, Lisa Davis, a well known Newark freedom fighter and activist, core member of Peoples Organization for Progress, NJ organizer for Black is Black Coalition and seeker of justice for the unjustly incarcerated was herself had cops called on her, always an implied threat of unjustified incarceration. 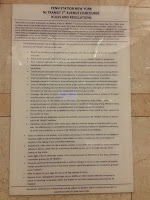 For what you ask?  For walkingTHROUGH the the waiting area in Newark Penn Station – while Black – and when asked to show her passenger ticket, questioning the policy – and she had transit cops called on her - AFTER presenting her monthly pass (which she pays $170 per month for.)"

She was there to document the signs now posted by NJ Transit in Penn Station saying that you can be ARRESTED and criminally PROSECUTED and removed from the station for sitting in their waiting area in one of their “rinky” waiting rooms for over an hour.

Lisa Davis is a regular – daily – user of mass transit and is in the train stations and port authority ALL THE TIME!  In fact, on September 9, 2016, I joined Lisa to purchase smoothies in one of the Newark Penn Station shops. 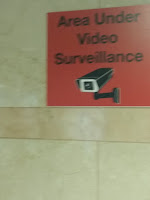 So yesterday, after being harassed in this way – Lisa Davis pointed out the priorities of NJ Transit.  She takes us to a train station and shows us steps covered with snow a full 24 hours after the Stella winter storm made its way through Newark.  Lisa states that earlier today – the platform itself – was covered with snow – creating a hazard in the dangerous setting where high speed trains regularly pass through and where people in all stages of life need to safely on board and depart from passenger train cars. 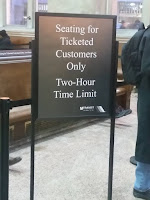 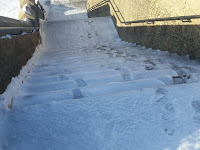 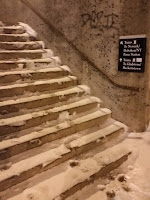 Arresting weary passengers who get to the station more than an hour before their train for trying to take a load off their wary bones is just one more measure of the system’s repressive war on impoverished and working class residents and travelers.

Hats off to Lisa!

Here is her Decarcerating Street Reporting – Real News – Exposing the carceral apparatus and the role of NJ Transit in the low intensity warfare against the impoverished and working people.

The decscriptions of these videos – which were originally Facebook Live videos are taken from Lisa description on her own Facebook wall:

PART I. NJ Transit Abuses. The NJ Transit police were called on me today (3/15/17) for attempting to walk through their waiting room in Newark, Penn Station. I questioned why I had to show a ticket to just walk across the waiting room. I couldn't believe it. But even after I showed the ticket, the police were still called. But the irony of this is that NJ Transit has mounds of snow and ice at their train platforms, at least in one Black community and sees nothing wrong with that. They don't see that as dangerous. Please see part II of this video called NJ Transit, Dangerous Steps.


Part II, New Jersey Transit. Dangerous Steps 3/15/17. I recorded this video approximately two hours after the video of the police being called on me for simply attempting to walk across the NJ Transit waiting room in Newark, Penn Station. (Please see part I of this video where I was able to record the entire incident.) These steps are concrete. I had to walk up them earlier this morning to catch a train. They have ice and snow covered all around this train station. And they have loads of snow and ice on the train platform. The majority of the people who catch the train at this station are Black and Latino, so you know they don't rate for anything with NJ Transit.

Thank you Lisa Davis for this top notch expose on the decay of infrastructure including public transit.  I am hoping that this blog can include much more of this kind of street reporting to bring the revolutionary side of the issues to the forefront.  If you can gather this kind of information and write this kind of commentary – contact Decarc@DecarcerateNJ.org and we will set you up as a Decarca-Reporter. 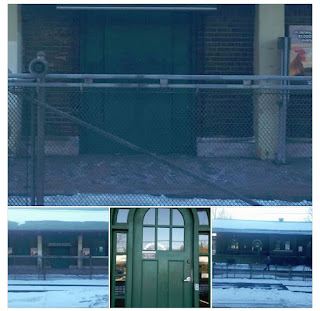 NJ TRANSIT - RIDING THE TRAINS WHILE BLACK. Let's play a game. Can you guess which one is in the Black Community and which us in the White community. All these pictures were taken during the morning commute and the trains stop at both these stations. These stations are one stop away from each other, on the same line, and are just one minute away from each other. Really gives meaning to the wrong side of the tracks, doesn't it? These pictures are worth a thousand words, which means I'll be writing more.

The following note from Eric Martindale arrived in my in box from the Peoples Organization for Progress.  I pasted the letter into the group Decarcerate the Garden State on March 4.  Now it seems the measure being protested by the referenced petition has been passed by the Newark Council and is headed for possible adoption.

This sequence of events led to a discussion at tonight's POP meeting.

It was lamented that council members that are members, supporters and have received support from POP in the past were favorable toward this measure.

POP intends to write to Ras Baraka to state opposition. Lawrence Hamm lamented that POP had not played a more direct role speaking out against this at council meetings.

That - he said - is the kind of work POP needs to be doing.

I pointed out that POP had sent the letter out that I posted earlier.

To Jim Brash;s credit he DID take it to Ras Baraka over twitter and the mayor actually engaged Jim - but his tact was to point out that Jim is not a Newark resident.

Jimmy Brash - proponent of the Black Caucus of the Green Party simply suggested to Ras Baraka to listen to his constituency on the matter.

POP voted to send a letter to Ras Baraka opposing this measure.

Baba Zayid spoke up that Newark had voted to keep the money out of Newark - but that this shows that the money is coming in nonetheless - and decisions are being made in favor of the landlords and developers - over the tenants.

To its credit - POP had at least sent the letter out - which led to my posting it and Jim challenging Baraka over it on Twitter.

POP has a pretty consistent full court press organization on many issues but as a volunteer organization it is not staffed up to be able to fully handle the load of defending the people from the multi faceted attacks ever incoming.

Larry Addams pointed out that coordination of retirees and those out of work (or not working during the day) could get people to the 10 am during the week meetings - like the one where this landlord measure was passed.

Lawrence Hamm was not optimistic - he believes that Ras Baraka will end up signing it.

I personally would like to urge folks to contact Ras Baraka and urge him to veto this measure.  He can say he needs more time to study the matter.  While the Mayor can point out that I personally do not abide in Newark as he did with Jimmy Brash, I did attend a POP meeting which represents at least a significant constituency in Newark and am confident from their reaction to the council vote at tonight's meeting that a Baraka veto of this measure is in the best interests of the people of Newark. 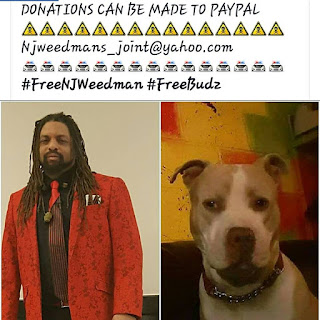 Mercer County NJ continued its relentless attacks on Ed"NJWeedman" Forchion only this time it came 72 miles outside of Trenton in a quiet suburban neighborhood in Parsippany NJ. On Friday 3/3/2017 At approximately 12:20pm The US Marshals descended on the home Edward Forchion shares with his business partner/girlfriend Debi Madaio and her 3 children Arresting Public Enemy 420  and executed a questionable search warrant and arrest. This arrest set a new president for the NJWeedman, being his first Facebook live broadcast.  Forchion's many followers & friends, as well as law enforcement agents were able to watch it all unfold in  real time.  According to Mercer County Records, Fochion had been indicted earlier that week on 2nd and 3rd degree witness tampering 1 charge of each by publicaly naming his accuser, the Prosecutions C.I,  Zev Lapadus, and even going as far as to ask the Court to also release his name and hand over video surveillance seized in the April 2016 Raid on his infamous Trenton temple, referencing his right to face his accuser in a jury trial."I want you all to know I am a POLITICAL PRISONER ...this has nothing to do with Cannabis ..this is a Constitutional issue the right to face my accuser."    Police did not produce a search warrant, and on more than one occasion made reference to the fact that Forchion was broadcasting live on Facebook from inside the house.  The police were refused entrance inside the house by Madaio's daughter, insisting that a search warrant be produced before consent would be given allowing them to enter the home.  The police did call Debi Madaio, who was not at home at the time and told her they were looking for her daughter's boyfriend who was a fugitive.  When Madaio questioned who they were looking for, the police returned with "what kind of mother are you, you don't know who your daughters boyfriend is".  Madaio insisted that she be told who the person was that the police were there to arrest and after many threats of arresting her younger daughter for harboring a fugitive  as well has obstruction if she did not allow them access, they told her they were there to arrest Edward Forchion.  The police did not produce a search warrant, one of them pointing to a window stating "I see him in the window, that's enough probable cause for us to get a warrant". No warrant was ever produced, and Madaio's oldest daughter was told she did not need to see one. The police entered the house as Madaio's daughter begged and pleaded with them, "don't freak out my sister she is autistic, please don't scare her, please don't hurt my dogs"  Which the police replied "if you don't open the door we are going to scare the hell out of her, and we can call animal control if we have too"  The police were not given permission to enter the house, but did so anyway to find Forchion sitting on a chair in the back bedroom.  He was taken into custody without incident. Madaio states that there was a simultaneous police assault on Forchion's Temple in Trenton NJ where all of his camera and computer equipment was once again seized.  Forchion was booked into Mercer County Correctional Facility where he will remain until at least Tuesday when he will go before a judge for a Dentention Hearing this is on the personal request of Assistant Prosecutor Stephanie Katz, who was insistent Forchion should be held in custody until trial.  N.J. 'Weedman' appears before judge on witness tampering charges
Donations can be made to PayPal Address Above https://www.paypal.com
Posted by Debi Madaio RN BSN at 5:05 PM No comments: