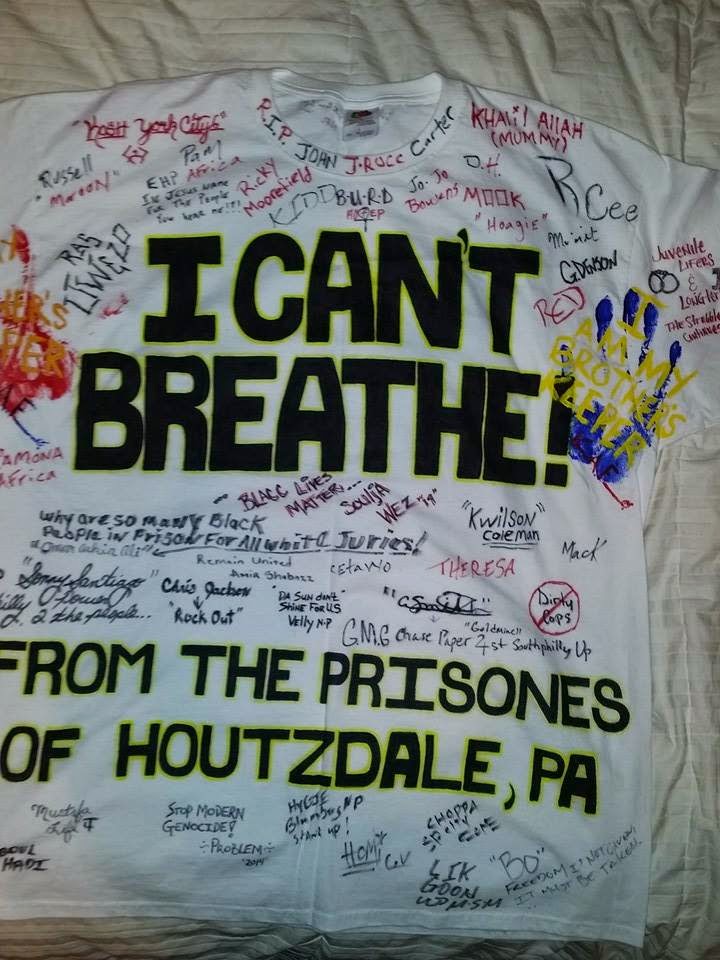 I have generally in my presentations on the program of action of Decarcerate the Garden State outlined a 5 point plan of attack to attempt to put some muscle into our demands:

Presenetation from Tour de Decarceratre from January 24 2015 in Camden on these topics:

1.       Legislative – we drafted the NJ Decarceration Act that calls for the release of non-violent offenders, incarcerated reductions of 50% over the next 4 years, restoration of voting rights to NJ’s incarcerated and formerly incarcerated and the use of funding saved from prison roll reduction to fund employment, community support and support for re-entry of those formerly incarcerated.  We are promoting two versions of our petition including an on-line version and a face to face one that we are gathering signatures on when we distribute the paper.
2.       The community forum – we are promoting our Tour de Decarcerate effort to organize community based panel discussions on this and related topics in over 30 NJ cities in the months ahead – be they on the streets or in facilities that are easily accessible to the community.  The goal is to build unity between the communities and develop a working core in each community with the potential of mounting a concerted struggle by a critical mass, engaging the people in the communities most severely affected by mass incarceration across the whole state to press for sweeping decarceration.
3.       Newspaper and other media of Decarcerate the Garden State - The continued distribution of our newspaper the NJ Decarcerator at our events, through tabling on the street, among organizations and in communities and when possible to the incarcerated  and the building of our other virtual media including our blog site which now features a wide range of authors from across the state of NJ and elsewhere on this and related topics   http://decarceratenj.blogspot.com/ , our nightly internet “paper” The NJ Decarcerator Daily https://paper.li/DecarcGardState/1416194769 , our website http://DecarcerateNJ.org and our Facebook group https://www.facebook.com/groups/DecarcerateNJ/1561166407462804 and page  https://www.facebook.com/DecarcerateNJ .
4.       Justice Committee – through this we need to support freedom for political prisoners and calls to action for relief of the hyper abuse and oppression they are subject to by the incarceration systems.  Also the Justice Committee supports those that are unjustly convicted and sentenced, like Kwadir Felton who was first victimized, blinded by a police bullet to the head and then sentenced to 16 years due to a gun charge without physical evidence and trumped up conspiracy charges due to a number in somebody’s cell phone.  We also can support calls of support for incarcerated  to pressure officials to end abuses of specific incarcerated or to meet their needs for medical attention, etc.
5.       Study – We support the creation of study groups to engage individual and group discussions around these topics including around the text The New Jim Crow by Michelle Alexander as well as many other writings and videos, including this one from our first major street panel discussion in Newark in July of 2014

Our goals in this regard are to promote confidence in the ability of more of our members and associates to be able to speak authoritatively on this topic be it to a politician, at a panel discussion, in a classroom, as a guest speaker before an organization or face to face gathering petition signatures and handing out our paper on the streets.

All of that is important work that needs to be done but it is missing an important ingredient that must be added to our list of tasks at hand.   We need to basically tear down the walls between the decarceration movement on the outside and those who are incarcerated  - the walls that serve AS BARRIERS of communication between us and the incarcerated.

We need to FACILITATE a means of communication across those walls.  From the outside – we need to communicate that we are a massive movement that is readying to rise against mass incarceration and demanding DECARCERATING ACTION from the powers that be.   Those on the inside need to hear this message of hope.  We also need to communicate that we are prepared to act in solidarity and support should the incarcerated organize themselves to strike or otherwise act against the injustice of this system from the inside – against the torturous solitary system, the mal nutritious food, the lack of or poor medical attention, the systemic violence and other day to day deprivations that occur.  It is not our place to suggest that incarcerated place their lives on the line through such action but we can at the same time make it clear that THERE IS SUPPORT ON THE OUTSIDE!  And this could certainly include if possible, getting our newspapers to the incarcerated on the inside – hopefully they can then determine a way to get the papers circulating and passed from one incarcerated person to another.  We can also begin to organize around the visiting days to develop open lines of communication with the families and they can serve as the conduit to conduct the information into and out of the units.

The communication that must be facilitated is TWO WAY!  We need to also offer to assist in the communication of information about abuses and needs of the incarcerated from within to the decarceration movement and beyond on the outside.  This includes visuals as well as written information.  It can include information gathered from interviews with the incarcerated or from the families and other visitors about what is going on inside.   If incarcerated can get images from cell phones or other camera devices to us, we can circulate those.  We can use our blog site and possibly set up other sites to get this information out circulating.

I believe that if we TAKE STEPS TO FACILITATE LINES OF COMMUNICATIONS ACROSS THE WALLS which certainly are the proverbial lines of division between the oppressed on the inside and those on the outside we will be STRIKING A MAJOR BLOW against mass incarceration in NJ!

In discussions with “Spokesperson Ray” who is part of a incarcerated support network called the FREE ALABAMA MOVEMENT in our Facebook group, Ray has stressed:

“ . . .  as much as we appreciate the work being done around the country to end mass incarceration, prison slavery, and all of the ills that are associated with it, we have concluded that the success of the various movements and campaigns to end these systems won't ever occur without the participation, organization and actions being taken by the men and women who are incarcerated.
"We have a tactic for this that we are asking organizations like this to get behind and support: Free Alabama Movement, Free Mississippi Movement, Free California Movement, and, hopefully, Free New Jersey Movement.”

“We are also organizing the families for protests at the prisons. The Movement against mass incarceration MUST transition and move TO THE PRISONS. Issues like police brutality are being protested at police stations. Wal Mart workers are protesting at Wal Mart.  I read where the NY Union director organized at the entrance to Rikers Island and that it clogged up access to and from the compound. Organizers have to do the same. Clog up the entrance/exit. Frustrate shift changes. Make the State pay overtime. And most important, the people on the inside have to conduct work strikes."
"Prison systems are about slave labor and money, so we have to attack that system at the core of its economics -- the labor.  Additionally, we have identified one major, national corporation who uses prison labor, and we want to organize protests around the country to force them to stop.”

“We have to employ a tactic that will impact any system where we are organized at. Fundamentally, no prison system in this country can withstand coordinated work strikes. There simply is no way for states to compensate for the amount of free labor that they receive from people in prison. From plumbing, to electrical, to cooking food, mopping, and then the factories, farms etc.   Now, its just a matter of bringing more organizations onboard and spreading the Movement around.”

"We have a blog where we have written at length on this. Also, the book on our website covers this subject in detail. Scroll down to the bottom of the page and you will see the link to download. www.freealabamamovement.com ."
"We did our first round of strikes to start off January of last year. Over 4000 people in Alabama joined in. This is why you see so much press about Alabama prisons, prison task forces, Council of State Government, etc. We are not done yet, and we want to join with others who are trying to solve the problems that we want solved.”

Reiterating – it is not our place to suggest the kinds of actions that the incarcerated determine are the best means for them to struggle against their oppressive conditions but we need to let those on the inside know that we are poised and ready to support their fight if and when they decide to make their move!
Posted by Bob WItanek at 12:17 PM