OUT NOW! NO MORE FOOTDRAGGING ON COMPLICATED PRISON REFORM SCHEMES 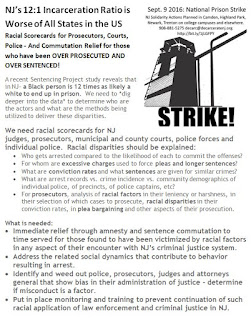 As a veteran of anti-war protest – I have always been on the side of the inter movement debate that has supported the position of US OUT NOW!  There have always been proponents that would attack that position as unrealistic – and instead support schemes including sanctions (which kill almost as good as bombs do) and complicated cease fire negotiation schemes.  Often those with the schemes that allow the war to continue are often also proponents of Democratic Party candidates – they thus support war-lite positions to give false peace credentials to their war making allies in government.
We are at the same point with the demand for an end to mass incarceration.

I would suggest that probably every or nearly every political office holder has the position that there are “too many” prisoners.  There are many incremental schemes – 5 year plans – 10 year plans . . . proposals where those that might eventually get some degree of relief from their current harsh sentences have to conform to rigid programs preparing them for “return” then intensive monitoring (supporting the prison monitoring security equipment companies) once they get limited release from incarceration.

Given NJ’s reprehensible – worse in the nation – probability of incarceration disparity – where Black NJ residents have a TWELVE TO ONE greater probability to end up incarcerated as NJ’s white residency – OUT NOW! Is a legitimate demand.

Let’s demand IMMEDIATE COMMUTATION RELIEF for NJ’s incarcerated and a full fledged investigation of how NJ earned this infamous worse in the nation disparity.

A simple demand for immediate commutations . . . instead of trying to embrace complicated reforms that are being bantered about – could possibly garner public support and create the kind of pressure that could expedite any actual relief that gets meted out.

We need to make the demands that resources be allocated to exposing these disparities in NJ criminal justice and that commutation be immediately provided to those that have been victimized by these racial aspects of NJ’s so called criminal justice.
Posted by Bob WItanek at 4:21 PM