Proposed Course of Action for Decarcerate the Garden State 2017

NJ is fortunate that Jennifer McClendon millionsforprisonersnj@gmail.com  has stepped forward to volunteer for a coordinating role in the to be historic Millions for Prisoners March on August 19. 2017.

I propose as a project for January through August for Decarcerate the Garden State that we partner with this national effort – which is supported by many of the “inside” organizations of incarcerated men and women – toward making it a success. 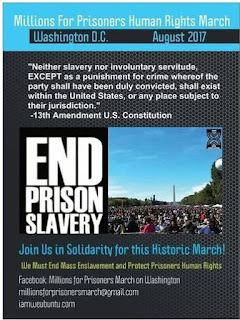 A series of events all over NJ – primarily in the “cities” and areas of the state that are targeted by the mass incarceration due to racial and economic demographics – to promote the goals of Decarcerate the Garden State and the Million Prisoners March.

That we begin communicating to all of the organizations and organizers of the state the details of the planned national march.

That we offer to join Jennifer McClendon and the Million Prisoners March movement in a letter calling upon organizations and individuals to participate.

That we begin the process now of determining the means to provide economic means to get into DC on August 19th.  We begin to reach out to Church organizations and other institutions that might own or have access to buses and vans.

That we set up fundraising to provide funded seats to make participation accessible to the communities that are directly impacted (that have a tendency to be impoverished).

That we have an initial meeting at a time that Jennifer McClendon can participate in Newark, NJ – perhaps as an agenda item with Peoples Organization for Progress and from there we set up semi-weekly or weekly phone conferencing.

That we begin to identify organizers around NJ that can assist by setting up an event in their community around the issues of mass incarceration, enslavement of the incarcerated, the 13th amendment, NJ’s racial disparities in incarceration and participation in the national August 19th Millions for Prisoners March demanding the Amendment of the 13th – to remove the exclusion of the incarcerated from the ban of enslavement in the US.

Production of a new issue of NJ Decarcerator highlighting the march and our other NJ work.


To support this effort and second the motion and vote in its favor, write to Decarc@DecarcerateNJ.org and / or participate in the Facebook discussion on this topic in our group: