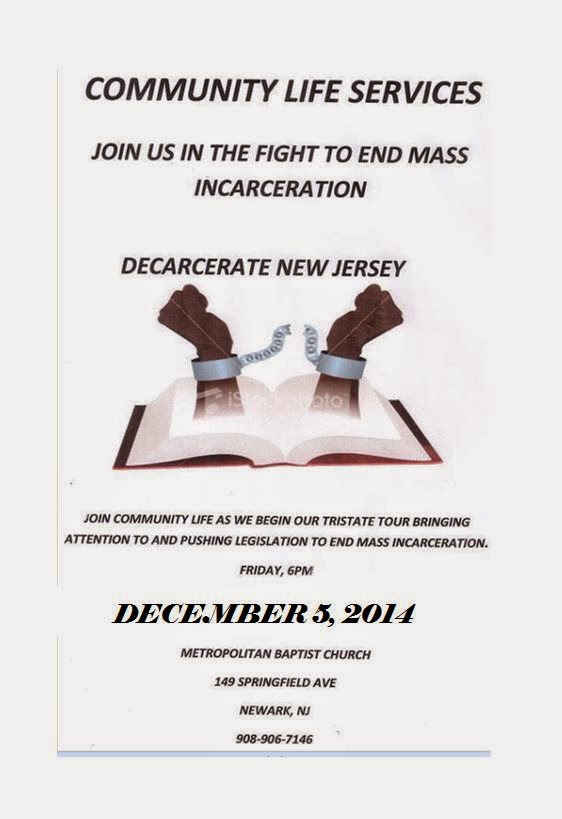 Ending mass incarceration and calling upon NJ legislators to take swift action to introduce and pass sweeping legislation to immediately release non-violent low level offenders is the topic of a major Newark event scheduled for this Friday, December 5, 6pm at the Metropolitan Baptist Church, 149 Springfield Avenue in Newark.

The event is open to the public and free. The event will feature speakers from several proponents for ending mass incarceration in NJ including:

Dr. Justice of Community Life services, a former political prisoner will speak on the challenges of escaping the mass incarceration, public defenders, displacement

Lawrence Hamm of Peoples Organization for Progress will give an overview of the political underpinnings of mass incarceration and the historic role it has played and continues to play in stifling social progress in Newark, in NJ and throughout the country.

Dique of the National Jericho Movement will discuss the importance of keeping support for the immediate release of the hundreds of political prisoners in America’s prisons be at the forefront in the demands for justice of the decarceration movement.

Munirah B. of the Million Woman’s Movement will be speaking on the aspect of how incarceration affects women and family.

George Hornsby of Black Wall Street will be speaking on prevention, and offering employment to formally incarcerated for drug offenders, as well as drug counseling.

Bob WItanek will speak on behalf of the organization called Decarcerate the Garden State http://DecarcerateNJ.org which has published a newspaper called The New Jersey Decarcerator. The organization calls for the passage of a “NJ Decarceration Act” to bring about a 50% reduction of NJ’s state incarcerated population through a combination of sentence reduction and immediate release of non-violent offenders.

Randy Burley of Fathers on Fire will speak on reaching out to the families of the incarcrated to bring them and even the incarcerated themselves into the fight for decarceation.

Several other prominent speakers will address the various evils of mass incarceration.

According to Dr. Justice, “We of Community Life seek to put an end to mass incarceration by way of legislation.   The way the system stands , poor whites blacks and Latinos are used a commodities for profit. We have to understand as well. the system is used for social control. "

The event hopes to examine several questions on the topic of mass incarceration:
1. Many people have been displaced by incarceration , that means children in the system of foster care and homelessness. Hence, there will be preliminary applications for affordable housing given out at this conference.
2. We will look at the position of the Public defender being accountable to a strong defense.
3. “There have been several people who have been released from prison because of DNA. This aspect tells us that what was presented to a jury was not at all true”.
4. The aspect of “ A Jury Of One’s Peers “ will be looked at.
For more information, contact Dr. Justice (908) 906-7146 \
-30-
Posted by Bob WItanek at 8:03 PM