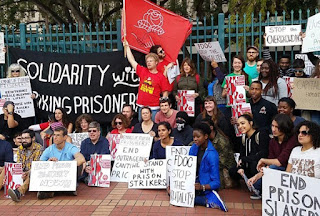 “But now with the living conditions deteriorating, and with the sure knowledge that we are slated for destruction, we have been transformed into an implacable army of liberation.”

Phone calls, canteen purchases, visits from loved ones, and work assignments are all part of Florida prisoners’ daily routines. But so is massive coordinated resistance to incarceration conditions that, in Florida, includes the 2012 torture and subsequent death of Darren Rainey. Rainey was incarcerated in the Dade Correctional Institution in South Florida when guards “punished” him by pouring boiling shower water on him for two hours. Unfortunately, his death has become emblematic of general Florida prison conditions many are courageously resisting.

In a 101-page report released last spring, officials ruled Rainey’s death an “accident,” and blamed it on his poor health condition that includes schizophrenia and heart disease. Others investigating the death point to an incomplete investigation into Rainey’ death… You know: business as usual for the Florida Department of Corrections (FDOC).

It's treatment like torture, solitary confinement, medical neglect, and exploited labor and living conditions that have us witnessing sustained prisoner resistance efforts in the face of serious administrative repression. The most recent campaign is Operation PUSH (#OperationPUSH), which was launched on January 15, 2018 to honor Dr. Martin Luther King, Jr. Day. This is a statewide prisoner strike to end inhumane, even deadly, Florida prison conditions.

It is one thing to refuse to purchase services or take visitors, it’s quite another to refuse work. This is exactly what the savvy organizers inside, and their outside supporters, know well. Hitting the industries profiting from prisoner wage theft can serve as a wake up call to the FDOC. Not only do inmates perform the grunt work that keeps the prison running-- laundry, cooking, cleaning-- but they also participate in a state-approved non-profit program called P.R.I.D.E. This organization has prisoners working in all kinds of industries like furniture and garment manufacturing--for very low pay and in frequently dangerous conditions--under the auspices of inmate vocational training that makes communities safer and saves taxpayer money. 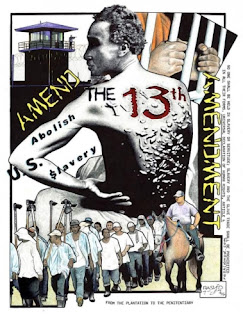 Redefining the meaning of the word “pride,” striking prisoners in 8 facilities started a laydown/ work stoppage and refusal of other privileges for at least one month, or until demands are met.

Theft of prisoners’ wages is a growing topic of concern in the liberal media, like PBS and NPR. Recently, we saw coverage of California women prisoners earning a mere $2.00 to fight deadly toxic wildfires. In Florida, the average hourly wage is from $0.00 to $0.32. This wage theft reminds us of Florida’s status as one of a handful of states where prison jobs can go unpaid altogether. Alabama, Georgia, Mississippi, Arkansas, South Carolina, and Texas are the other states with literal slavery conditions: there’s no other way to describe mandatory free labor.

This no and low pay condition for mandatory labor has a cascade effect hindering other quality of life issues for prisoners, such as inability to pay exorbitant fees for canteen items and phone calls.

One organizer explains in an interview with It’s Going Down, as published on the Incarcerated Workers Organizing Committee (IWOC) website: “These “privileges” are a facade which help them more than it does inmates by boosting their revenues. Boycotting them may temporarily seem like creating burdens for ourselves, but that sacrifice now is worth having a better tomorrow. Or future.”

This widely supported and extremely well-coordinated effort has three major demands: “payment for our labor, rather than the current slave arrangement; an end to outrageous canteen prices; and the reintroduction of parole incentives to lifers and those with Buck Rogers dates.” (Buck Rogers dates are release dates set so far in the future as to seem fictional in nature.)

Other more specifically stated goals include: stop the overcrowding and acts of brutality committed by officers throughout FDOC which have resulted in the highest death rates in prison history; expose the environmental conditions we face, including extreme temperatures, mold, contaminated water, and being placed next to toxic sites such as landfills, military bases and phosphate mines (including a proposed mine which would surround the Reception and Medical Center prison in Lake Butler); honor the moratorium on state executions, as a court-ordered the state to do, without the legal loophole now being used to kill prisoners on death row; restore voting rights as a basic human right to all, not a privilege, regardless of criminal convictions.

The idea is to laydown and refuse work until Governor Rick Scott faces the harsh financial reality of hiring outside of his precious walls for labor to run daily prison operations. This “could cost millions of dollars each day the strike continues, which the state of Florida relies on incarcerated workers to do for a fraction of that cost.”

Haitian strikers currently incarcerated in Florida are connecting their presence as laborers in Florida facilities to Trump era detention policies. A solidarity statement from Haitian prisoners explains: “Prisons in America are nothing but a different form of slavery plantations... There are so many Haitians, Jamaicans, and Latinos in the FDOC serving sentences that exceeds life expectancy and or life sentences who are not being deported. They use all immigrants, for free Labor and then deport them.”

This strike emerges on the heels of what has been a few serious years of prisoner resistance and organizing in the state, coordinated with national efforts. August 2016 saw prisoners placed on lockdown in anticipation of the national prisoners’ strike commemorating the Attica prison uprising’s 45th anniversary on September 9, 2016.

Prior to #OperationPUSH’s January 15th kick-off date, on January 13 it was reported that facilities began to retaliate against strike leaders and organizers by placing some in solitary confinement.

An Implacable Army of Liberation

On the strike’s first day, communication from inside ceased. Outside, supporters, including 100 organizations, organized solidarity actions including a protest at Norfolk City Jail in Virginia and a solidarity demonstration in Tallahassee, Florida where one demonstrator, a Dream Defender, was arrested. Supporters also rallied outside Miami’s Florida Department of Corrections building, outside the Lake Butler facility, and in Jacksonville.

It’s no shock that Angela Davis has thrown her enthusiastic support behind the strike, exclaiming that: “There’s no better way to keep the legacy of Dr. King alive than by supporting the prisoners’ strike.” Her speech was delivered to a packed audience at Florida State University, Tallahassee on Wednesday, January 16, 2018.

IWOC has merely heard rumors of what is currently happening inside, and the organization initially waited to verify rumors as facts before releasing information. As of January 17, there’s verification of pre-emptive organizer sweeps and facility lockdowns: collective punishment, if you will. Given the brutal conditions that characterize U.S. prisons, jails, and detention facilities, we should not be surprised to hear about prison administration crackdowns on strikers-- yet we should remain outraged.

On the Supporting Prisoners and Real Change (SPARC) Facebook page, it’s reported as of January 17 at 10 AM that: “Info coming in... key organizers being held in confinement ‘under investigation’ with no reason being given. Strong possibility they do not have access to certain personal property such as writing materials or extra clothing to deal with the extreme low temperatures in these prisons without heat. Details will be updated as we receive them.”

The temperature throughout the state is no joke this time of year. January 17, 2018’s evening temperatures dropped below freezing in Florida’s panhandle.

By January 18, the UK’s Daily Mail has covered the strike, reporting that Florida prisons have the highest death rate in history. Also, in 2017 alone, the FDOC confirms prisoners performed 3.15 million hours of outside labor as “community work squad members,” worth $38 million. Part of the arrangement is that instead of getting paid, inmates can work off sentence time. Of course, this also produces a sinister culture whereby guards can place time onto prisoners records-- especially if they are strike organizers and participants.

Speaking of sinister, Florida eliminated parole for non-capital felonies in 1984, and strikers are demanding the return of the parole option, which would reduce overcrowding, illness, suicides, and deaths.

Some prisons have already cancelled visitation and phone calling privileges in retaliation against strike demands. This is nothing other than pre-emptive collective punishment as this new round of serious struggle commences. Under collective punishment, every prisoner is a political prisoner. SPARC reports that Avon Park prison has shut off all facility phones. Prisoners who once planned to boycott phone use are now being denied the privilege pre-emptively by Polk County’s Avon Park administrators. What the hell are they planning to do to strikers?

In the meantime, as more news trickles in about the strike climate, there are many things you can do as an individual or a group to support #OperationPUSH. You can organize and attend solidarity demos; coordinate your organization’s endorsement of the strike (email fighttoxicprisons@gmail.com); use the #OperationPUSH hashtag to publicize the strike; write prisoners; and donate to supporting organizations.

Relevant and informative websites following the strike include:

Amidst the general organizing efforts inside Florida prisons, there’s a recent addition to the Florida system, and officials can’t be happy. Kevin “Rashid” Johnson, co-founder and Minister of Defense for the New Afrikan Black Panther Party (Prison Chapter), and author of anti-prison organizing book, Defying the Tomb, Kersplebedeb: 2010) was transferred from Texas to Florida State Prison in Bradford County six months ago.

Since this is Johnson’s fourth state prison system in six years (he’s also done time in Virginia and Oregon), he is one to adequately compare state systems. He has gone down on record as stating that he “can personally attest that conditions [in Florida] are among the worst I’ve seen.”

In addition to slave labor, Johnson also describes other travesties of justice: “On a literal daily basis prisoners are gassed, tortured and/or brutally beaten by guards with the full complicity of medical and mental health staff.  As part of this culture of abuse, grievance officials routinely trash prisoners’ attempts to grieve their mistreatment.  This to eliminate any records of the abuses and to frustrate any potential attempts at litigation.”

When Florida is outdoing other monumental prison states like Texas and California for exploitation and corruption, we have a serious situation on our hands that will not simply go away.

While striking prisoners portray their resistance as deliberately non-violent in the tradition of Dr. Martin Luther King, Jr., the state remains complicit in running a violently racist, class bludgeoning death chamber that is receiving international attention.

Even an imperialist U.S. president like John F. Kennedy can tell you that “Those who make peaceful revolution impossible will make violent revolution inevitable.”

Michelle Renee Matisons, Ph.D. is an adjunct philosophy professor and writer living in the Florida panhandle. She can be reached at michrenee@gmail.com.
Posted by Bob WItanek at 5:03 PM