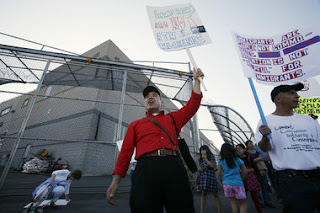 Resist the Deportation Machine, a coalition which Decarcerate the Garden State supports, sent the following letter to the Essex County Freebolders as a follow up to their recently coordinated protest at an Essex County Freeholders meeting.

According to Jay Arena of Resist the Deportation Machine organization:

"This letter is a followup to our November 9 demonstration at the Essex County Freeholders. After the demo we went into the meeting and demanded that the county break the contract with ICE to imprison immigrants at the Essex County prison. Enclosed above is a formal letter, sent this week by email, making that request."

This effort to close the detention facilities should be widely supported and linked to the struggles to end mass incarceration and oppose US wars at home and abroad.  Stay tuned for an announcement of a protest that will take place on January 27 around these issues.

We are writing to strongly urge you as  members of the Essex County Board of Chosen Freeholders and as County Executive to immediately act to end the contract with the Immigration and Customs Enforcement agency (ICE) to hold 850 immigrant detainees at the Essex County Correctional Center in Newark.

ICE’s detention centers throughout the country are a crucial part of its cruel and illegal deportation machine that is spreading terror and disrupting the lives of millions of immigrants.  Without ICE’s ability to hold up to 41,000 immigrants in detention, it would be impossible for it to deport the 400,000 or more immigrants per year it is now expelling. Most of the 100 detention facilities are, like the Essex County Correctional Center, leased from local authorities.

Shutting Down detention centers will force ICE to free immigrant detainees. The ICE system is full to capacity, and ICE is requesting Congress authorize 5,000 more beds. Detainees that are no longer housed at ECCC can’t, in general, be moved elsewhere because there is no room for them. ICE will have to release many of them. We are as well demanding that Hudson County and Bergen County close their detention centers and we expect that shutting down one of these centers will inspire other campaigns throughout the country. Multiple shut-downs will cripple ICE’s entire deportation operation, preventing ICE from simply moving detainees around. In 2006, the closing of the Passaic County immigrant detention facility in Paterson led to the paroling or outright release of over 140 detainees.

Immigrant detentions are unconstitutional and a threat to the rights of all.  By ICE’s own admission immigrant detainees are “administrative detainees” who have not been charged with or convicted of a crime. Their detention—really imprisonment under a different name—violates the basic protection of the Bill of Rights that no person is to be deprived of liberty without due process—indictment and trial by jury.

Deportations and Detentions Undermine All Workers’ Rights. The threat of arbitrary detention and deportation deters many immigrants from defending their rights to decent wages and working conditions. This hinders the ability of all workers to defend these rights.

Essex County Must not Run on Blood Money. The fact that the county profits from the unconstitutional detention of immigrants, because ICE pays for the beds, is not a valid argument for collaborating in the ICE deportation machine. The County could raise money by selling opioids as well, but that would not make it a wise policy.

Therefore you should act now to immediately end the detention contract with ICE.


Eric Lerner, on behalf of Resist the Deportation Machine
Posted by Bob WItanek at 8:31 PM