Can Decarcerate the Garden State Become a "Mass" or "Popular" Organization?


Is Decarcerate the Garden State starting to become a "popular" organization?  That might be an overstatement but there are indications that there is potential for that to begin to happen.

In order to assess the penetration of our organizing drive in the media and on the internet, I regularly search for references to Decarcerate the Garden State.  Most of what I come up with are links to our blog site, Facebook references, our website, our nightly internet “Paper” the NJ Daily Decarcerator and some of the articles about our work.   (Stay tuned for another blog article with links to the media and blog coverage and references to our work.)

However today – I was joyfully surprised by two particular references that surfaced.

We recently, on February 24,2015, held an event called “Decarcerating Plainfield” at the Plainfield Public Library, working with Keep Our Youth and Streets Safe (KYSS), Plainfield Peoples Organization for Progress (POP) and the Plainfield View.  The event had a decent attendance and was well received by those who participated.  It was also attended by several members of the Plainfield School Board, the Plainfield Council, local clergy and the Mayor of Plainfield.  The event also received support for the $15 NOW NJ movement that is fighting for a hike of NJ’s minimum wage to $15 per hour and the NJ Immigrant Youth for Liberation, a member of which pariticipated in the panel.

Anyway – I got the feeling that night that there was great warmth in the room and great appreciation from most in attendance of what transpired that day.  As the event closed – I proposed a follow up larger event in spring in Plainfield and afterwards spoke with the mayor and  many of the other great people that were in attendance.

So what I discovered today in my rounds of searching on Decarcerate the Garden State was this on the site of Plainfield Mayor AdrianMapp:

Decarcerating Plainfield and NJ Youth was the theme of a panel discussion at the Plainfield Public Library on Tuesday, February 24, 2015. Several local and statewide organizations joined forces and invited the public to participate. The event, sponsored by Keep Youth and Streets Safe (KYSS), which was formed to call for an end to street violence in Plainfield, the statewide organization Decarcerate the Garden State, the Plainfield branch of the People's Organization for Progress (POP), and the Plainfield View blog site, written and edited by David Rutherford (also a newly-elected school board member), brought this important discussion to town.

After the panel, several local residents also participated in the question and answer period. I was quite pleased to see so many people in attendance, and I spoke with the organizers after the event--more is planned for spring, so stay tuned. Click on the link for Plainfield View--David has been following the Decarceration Movement very closely, and he will have the video posted on the site.” 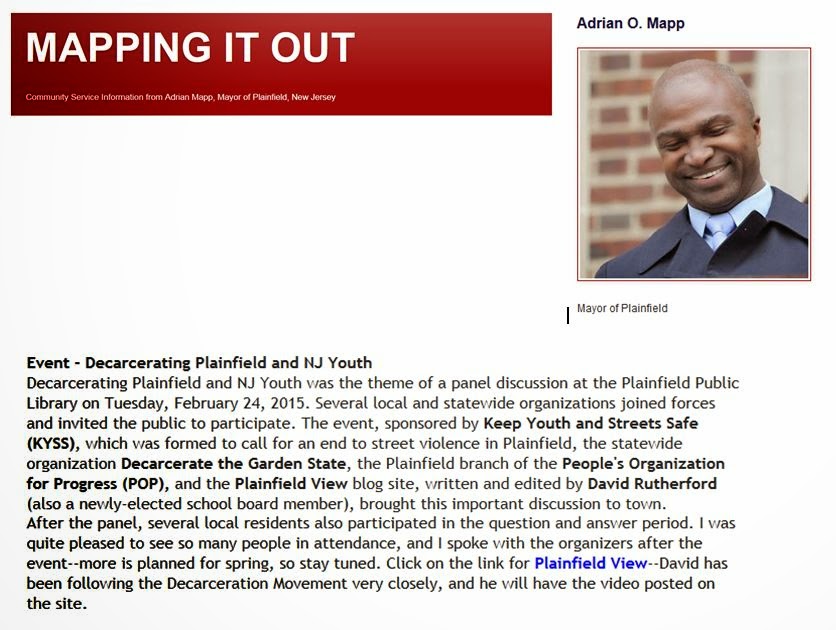 I consider this a solid endorsement by the Mayor of Plainfield of our efforts.  That he references our plans for another event in Plainfield means that he and the city are interested in becoming a part of the event.  He clearly has staked his position on the issue as a supporter of Decarcerate the Garden State.  I consider this as an embracement of our fight and is an indicator of the potential for our ability to connect with growing segments across the state of NJ!

The other interesting embracement – another pleasant surprise and possible organizing opportunity is a Pastor in Plainfield, Saafir Jenkins, that has listed partnering up with us as a suggested thing to do for social concerns in the community:

The site is Ruach Outreach Ministries http://www.ruachoutreach.org/ and at the site there are suggested social concerns for people to engage in:

Get Involved:
Here are some areas in which you can put your faith into action.  Please be on the lookout for additional opportunites to take part as we continue to diversify our areas of impact.
And number 5 in the list of suggested actions:

Partnering with the DGSP initiative to bring reform to the judicial system in an effort to transfer focus from excessive imprisonment to true rehabilitation.”

These embracements are an indication that the kind of work we are doing and our message is on the right track.  It does not mean that we have become a “popular” or “mass” organization but it means that we have the *potential* for that.
As our effort and our organization grows . . . we are going to have to get better organized – local committees, committees of focus, chapters, standing local meetings – all of these things will have to come.

Meanwhile, lets follow up on the connections we have made and continue to boldly turn over every stone – approach every targeted community and continue to lay the ground work for the Decarceration uprising of 2015 and beyond.  Hold on . . . it’s coming!
Posted by Bob WItanek at 4:24 PM