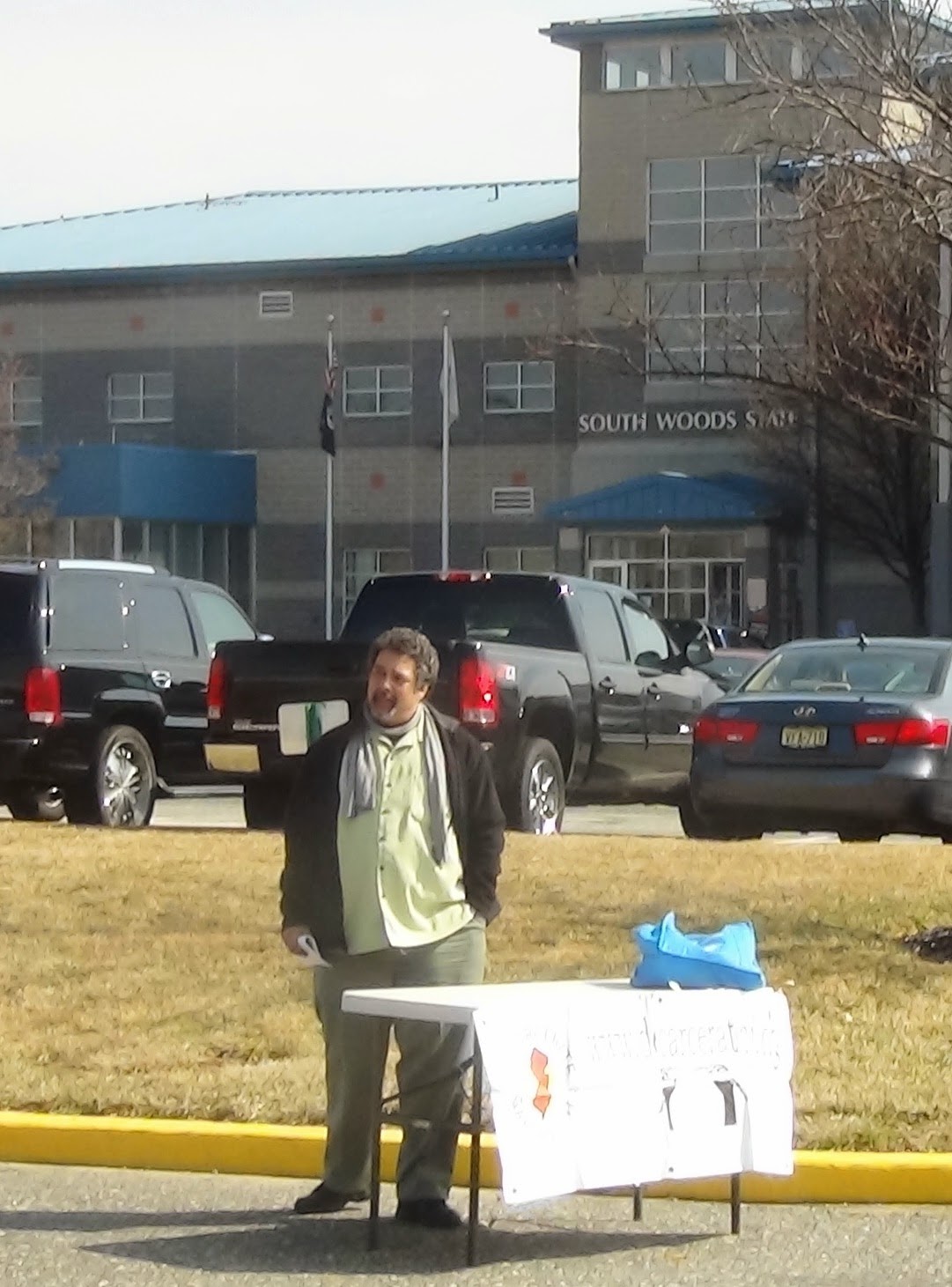 Today marked the first foray of Decarcerate the Garden State to do outreach at an actual Mass Incarceration Facility – at South Woods State Prison in Bridgeton, New Jersey.  For the task, I was joined by Rowan African Studies Assistant Professor Kim Holder.  Our goal is to invite family members of men incarcerated in that facility to our April 4 Decarcerating Bridgeton / South Woods event (3:30 pm at Resurrection (St. Andrews Episcopal) Church. 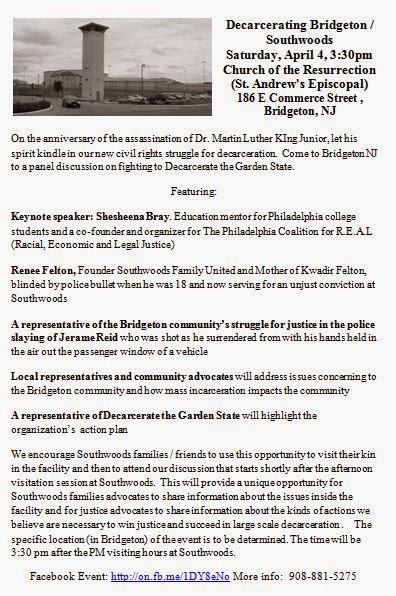 We arrived shortly before 11 am.  The visitor traffic was light.  Our first tact was to linger in the parking lot near the “Public Parking” sign and to approach visitors as they were coming to or leaving the facility.  One major challenge was to discern between visitors and corrections personnel, mostly CO’s.

The letter we were sharing invited visitors to participate in our Bridgeton meeting and also to help spread the word by asking the visitors to suggest to their loved ones to help spread the word inside the facility – encouraging them to invite their relatives to visit them on April 4 and then to attend our local meeting (about 2 miles from the prison).  Here is the text from the letter:

Dear Family & Friends of Southwoods Prisoners,
On Saturday, April 4 there will be a meeting in Bridgeton, 3:30pm a half hour after PM visitation, just 2 miles from Southwoods.  The meeting is at St. Andrews Episcopal “Church of the Resurrection”, 186 E Commerce St, Bridgeton, NJ.  We hope people from around NJ will visit their kin / friends in Southwoods that day and then come to the meeting.  Please spread the word that April 4 is a STATEWIDE VISIT SOUTHWOODS DAY!

Ask your loved ones / friends on the inside to help spread the word!

Share this information with your loved ones and friends inside Southwoods.  Ask them if they can help by spreading the word inside to other prisoners– about APRIL 4 - NJ VISIT SOUTHWOODS DAY and the meeting after (there will be pizza!).  Prisoners should be encouraged to call their family / friends and ask them to visit on April 4 and then come to the meeting.
Spread the word that loved ones / friends can get more information by call / text to 908-881-5275 , e-mail Decarc@DercarerateNJ.org or the web: http://bit.ly/18N7You .

There will be a chance to share information between families about what is going on behind the walls.
We will have an informal part when we share pizza so you can get to know each other in a relaxed safe setting.
More details of the meeting are on the other side.
Please when you visit today, tell your loved one about this meeting and ask them if they can help spread the word to other prisoners to invite their families and friend to come back April 4.  If you are done with your visit today, please write letters and call them to give them this information.  The meeting will be way more successful if the prisoners themselves help spread the word to each other and to their families.  This is a first and if it works out we will have more such meetings in the future. 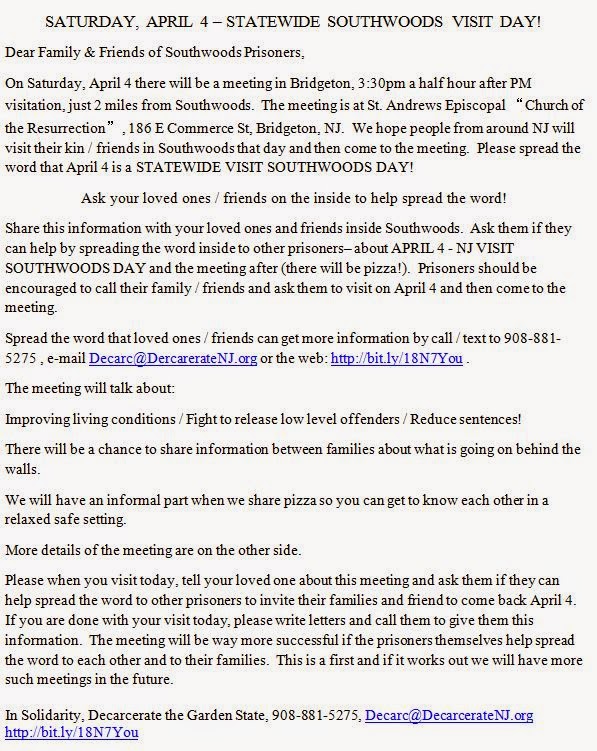 For more on the April 4 event: http://decarceratenj.blogspot.com/2015/03/to-southwoods-incarcerated-families-and.html

It was not long before we began to encounter resistance to our efforts, first from the corrections officers and later from Bridgeton police.  First a woman CO came by and asked us if we were ok.  Next a male guard told us we have to go across the street – that we cannot be in the parking lot, we cannot be on the edge of the grass by the road– we should go across the street.  His directives would of course prevent us from being able to get our letter into the hands of visitors.


Our response was to set up a table with our banner on the edge of the road by the exit way of the visitor / CO parking lot.  Next up another woman CO came out – she was very annoyed.  She wanted to know what we were doing (I told her we were inviting visitors to a meeting.)  She wanted a copy of the flier and I politely refused to give her one (because we paid to print them for visitors – not for corrections officials).  She was very annoyed about the idea of inviting families of incarcerated to a meeting in Bridgeton – her being a Bridgeton resident (whose livelihood depends on mass incarceration).  She also tried to convince us to get out of the edge of the street.  She then turned back toward the prison in a huff.

Next up was a vehicle with two officers, one woman and one male CO, and they asked if we have a permit to be there – I said that we don’t need one this being a free country and all.  The woman CO informed us that they would be reporting us to the police. 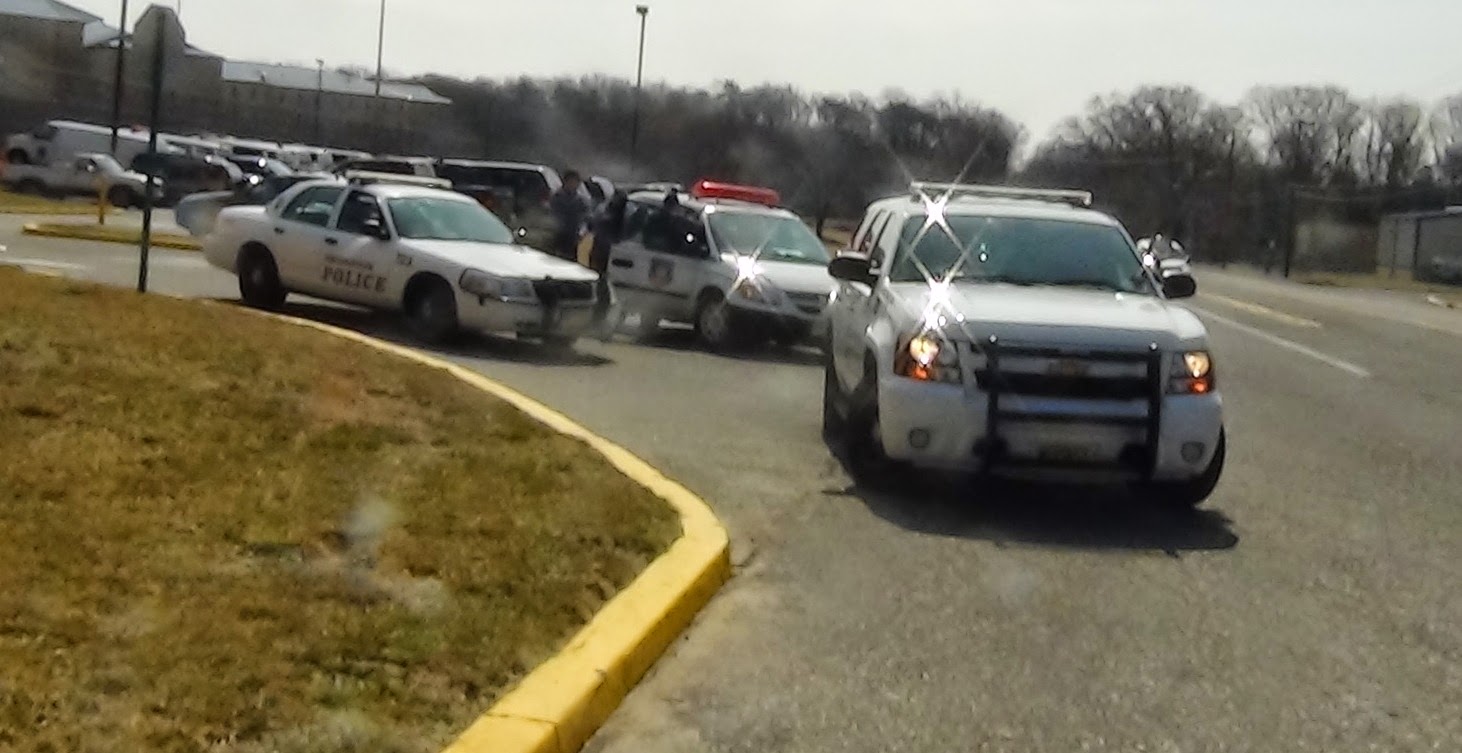 Shortly thereafter the police came – first two officers in one car and then another officer in a police SUV.  The first pair of police tried to reason with us and we agreed to move the table back about 20 feet from the parking lot exit.  The other police was firmer in insisting that we get out of the road completely.  He also insisted that the grass was “private property” (of the corrections facility) and that technically half the road was their property as well.  We then moved across the street and instead of using the table for the banner I draped it across my car.  However, from that position we were only able to get out one more flier. 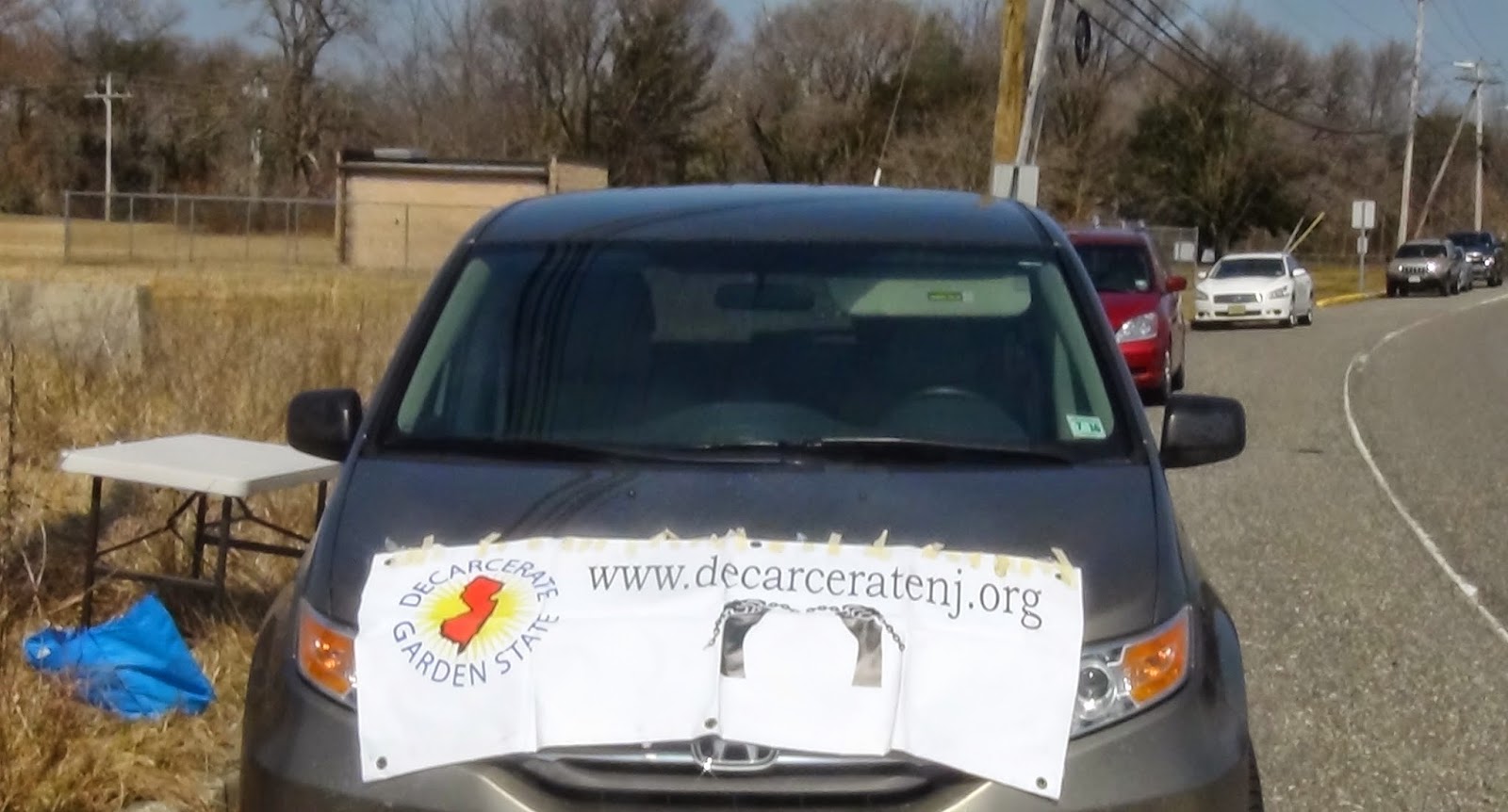 In all we might have distributed 15 – 20 letters to visitors – one told me she would mail it to her fiancé and that she was sure he would spread the word.  Not sure if that will happen but it is a good thought.

Being our first outreach at a prison visitation – it was mostly a learning experience. The lessons from the day include:

We need to consider legally challenging the restrictiveness to access to visitors of incarcerated.  Given the large numbers of incarcerated – visitation is unfortunately part of Main Street USA and as such – advocates need to have the right and ability to communicate directly with incarceration visitors.  In the early 90s in the lead up to Gulf War I NJ activists challenged and won limited access to shopping malls in NJ on the grounds of their being the main street even though they are private property.  In this case, the suggestion that the prison lot and sidewalks outside the facility are “private” when indeed it is constructed with tax dollars and the COs there are on the public payroll is possibly challenge-able.

I reached out to Constitutional rights attorney Bennett Zurofsky and he offered the following:

"Bob Witanek - I agree with your hunch that you have greater free speech rights in the public areas outside of South Woods Prison than the Department of Corrections and the Bridgeton Police were willing to recognize. To begin, property owned by the State of New Jersey is public property and most certainly is NOT private property as the local police told you. Because it is prison property it may be subject to some regulation beyond that permitted on Main Street (as you put it), but regulations that completely prohibit effective hand-billing outside of the security perimeter and along the side of a road or near a parking lot entrance so that you could effectively reach visitors would (in my view) almost certainly be held unconstitutional under both the State and Federal Constitutions.

If you weren't in Bridgeton (which is more than 2 hours from my office) I would undertake the case myself. I suggest that you contact ACLU of New Jersey which I think is likely to be interested in defending your right to this sort of leafleting in the immediate vicinity of a prison."

We have followed up with ACLU NJ and will follow up possibly with others to see if we can find legal representation to set aside the banning of such communication with prisoners at South Woods and hopefully other sites in NJ.  Here is our letter to NJ ACLU:  http://decarceratenj.blogspot.com/2015/03/in-response-to-south-woods-authorities.html

Meanwhile – it seems like an effective strategy – if we had the forces – at least at this facility – would be to strategically place our vehicles on the road near the parking lot entrance and exit ways festooned with large banners / signs – not only saying who we are but inviting them to come get a flier from us.  It will take some time for visitors to grow accustomed to being approached  by us since they are certainly not used to that sort of thing currently.  We can see if we can get visitors who are riding the visitation buses to do outreach on the bus rides where corrections do not have a watchful eye present. 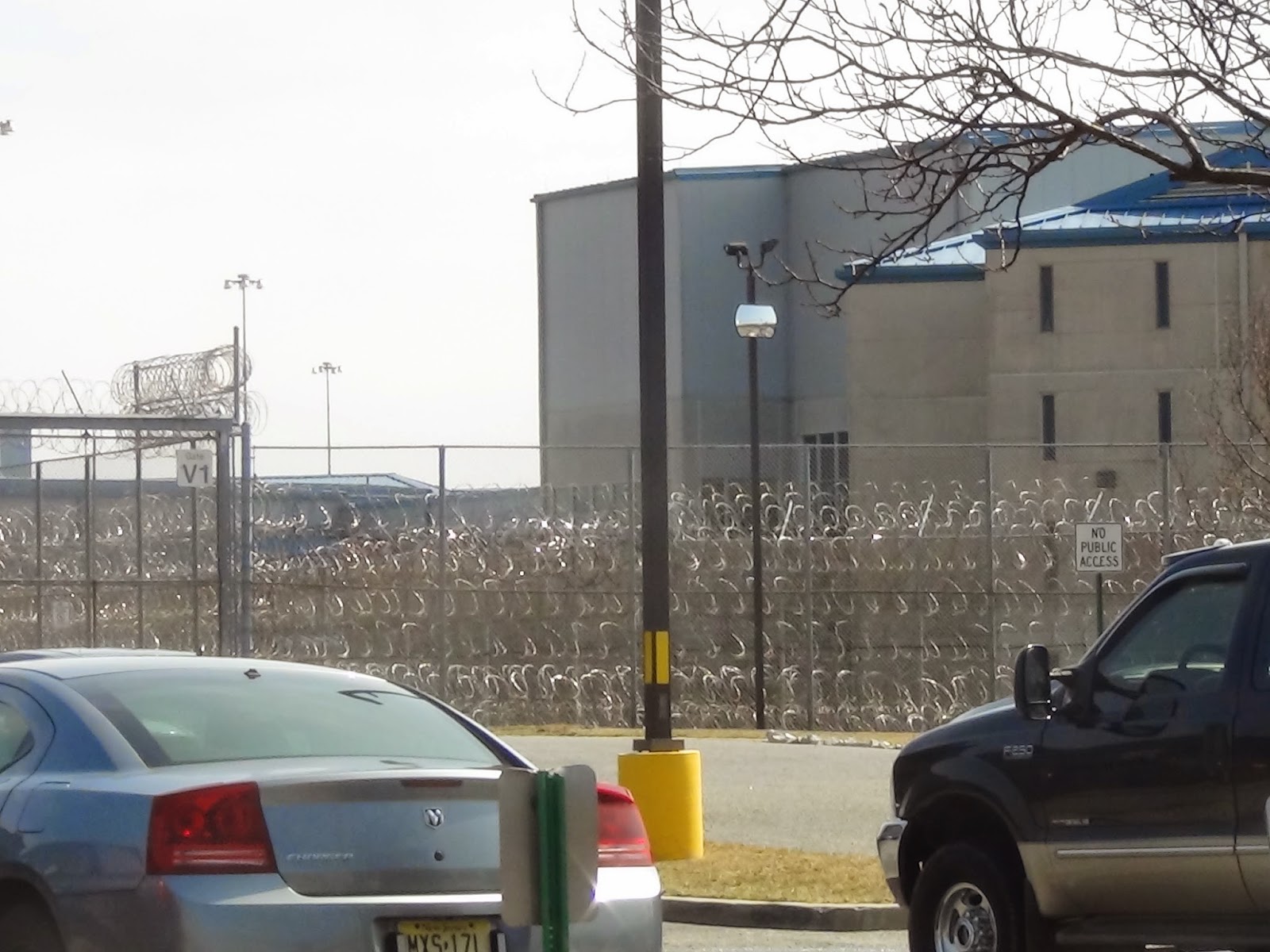 It was a first step – the nervousness of the authorities suggests that it is a proper step for us to take.  Forging an alliance between our decarceration organizations, visitors and the incarcerated themselves is key for us to build the kind of unity we need to fight for out goal to Decarcerate the Garden State!
Posted by Bob WItanek at 6:43 PM