NJWeedman opened "NJWeedman's Joint" on June 15, 2015.  His smile became contagious on opening day as he stared directly across the street at City Hall and welcomed every type of customer who entered - locals, fans, medical marijuana patients and City Hall employees. He had so much faith in the "Joint", despite opening up shop in the deserted end of State Street, with both sides of his restaurant touching vacant, run-down buildings.  NJWeedman's fame and appeal, however, actually made it possible for a viable business to run smoothly in the poor Trenton area.  A "joint resolution" was signed by state Sen. Shirley Turner, Assemblyman Reed Gusciora and Assemblywoman Liz Muoio, declaring in support of "NJWeedman's Joint" opening: “The grand opening represents the culmination of an extensive planning and building process, which has been brought to fruition only through the extraordinary labors and efforts of a number of devoted people whose commitment to NJ Weedman’s Joint has been exceptional and unwavering.” Reed Gusciora made a statement that certain Trenton authorities ignored: "We want to do all we can do to support all businesses that open in the capital city.”

NJWeedman can always find the best in people and he willingly puts his faith in those around him. He quickly bought up two vacant sections of his restaurant building, expanding the restaurant to include a religious temple (Liberty Bell Temple III) and a recording studio. He hired half a dozen employees from the local area, who were provided a voice in the direction of the company that is not seen in many other careers.  He recruited local customers by hosting open microphone events, where local artists of all types of music were provided a free stage to play and collaborate with other starving artists - after a few months "The Joint" released a combined mix-tape of tracks written by all the local artists.  He also recruited local artists and painters by allowing them to paint or draw free-style along the outside and inside of his building.  In a highly black-populated city, NJWeedman allowed Black Lives Matter literature to be passed out in his restaurant, including flyers for protests against the NJ State Trooper shooting of 14-year old Radazz Hearns.  NJWeedman also gained the trust of the homeless people on State Street by providing them work with outside duties.  NJWeedman even provided them chairs to sit in next door to his place.  NJWeedman invited #OpFeedTheHomeless to clothe and feed the homeless in Trenton during the winter 2015-2016.

Homeless and unemployed persons hanging out in their usual comfortable spot provided by NJWeedman, as Trenton police raided the person who treated them with respect. Photo by NJ.com, April 27.

A well-crafted and beautiful paint-job done by a local graffiti artist is set behind the two officers with semi-automatic machine guns. Photo by NJ.com, April 27.

Yet, certain powers-that-be in Trenton have nothing but disdain for NJWeedman, ignoring the economic services he provides to Trenton's impoverished business sector and the humanitarian services he provides to Trenton's lower-class.  NJWeedman brought a peaceful vibe to the community, which a dozen Trenton police officers shattered during a "midnight mass" raid on March 5, 2016, kicking out hundreds of temple members.  NJWeedman responded by filing an injunction in federal court to keep his religious temple open after business hours, commenting that the Trenton police "infringed on his religious rights."  Skip forward to April 18, when police investigated "NJWeedman's Joint" backyard with shining lights, using the excuse of a "noise complaint."  Then on April 19, NJWeedman was arrested for a warrant that claimed he did not pay his child support.  Curious that the police waited to arrest NJWeedman until only the day before his April 20 rally at City Hall and the State House, a.k.a. the "Third Annual 420 Trenton Smoke-Out."  Perhaps it had something to do with NJWeedman publishing an article in the Trentonian on April 15 that mockingly invited Gov. Christie to smoke at the 420 rally. Due to this NJWeedman sat in jail on the day of the rally he was supposed to co-host, but luckily Trenton police did not arrest the hundred other persons who smoked at the State House.  NJWeedman was released free around April 22.

The Big Raid came on April 27, when dozens of Trenton officers dressed in full tactical gear, including machine guns and tear-gas masks, raided NJWeedman's business. NJWeedman was arrested along with several employees, known as the "Joint Boys," and were taken to the Trenton Police Department.  Those arrested included NJWeedman, Grizzie Ray, a man by the name of Omar, and T JointBoy Williams a.k.a. 'Ghost.' Police brought in K-9 dogs and taped off the entrance to the store. NJ.com released an article about the 4:00 P.M. raid within the hour, which led to NJWeedman's friends spreading the message on social network under the hashtag #FreeNJWeedman.  NJ.com reported that the raid was conducted by Trenton police and the Mercer County Narcotics Task Force, and "a Trenton Fire Department ladder truck was called in so investigators could access a roof." The Trentonian followed with an article that had pictures of the Trenton police dressed up like they were ready to go to war with the community. The Trentonian wrote: "Members of the crowd yelled with displeasure at the police. Some yelled that officers used cocaine, while others yelled 'f**k the police, he’s legal.'”   The state's top radio show, NJ 101.5, mentioned the Trenton police were "armed with assault rifles and bullet-proof vests." Numerous other journals and online websites shared articles, including Scoop Nest, In USA News, MyInforms.com, Latest US Extra News, Wopular.com, etc.

Two black men being arrested during the raid, April 27. One of them is a regular employee for NJWeedman. Photo from NJ.com

The police made a statement by having a quasi-military squad invade the "Joint," which drove fear into local people who sided with NJWeedman over Trenton politicians and authorities. The police also took away NJWeedman's vehicles and his dog, Budz. Even if "NJWeedman's Joint" re-opened, those in power suspect that people will be too frightened to enter the business, and therefore NJWeedman will have to close shop.  Victory for those in power; a big loss for Trenton's economy and health as a community.

A black man being arrested during the raid, April 27. Photo from NJ.com

It is too early to say who is in charge of these attacks.  Possibly the Trenton police, who have known NJWeedman for a long time.  Could be the state courts that have repeatedly dealt with NJWeedman and his tactics of jury nullification over the last 20 years. Perhaps Trenton politicians are to blame.  On November 5, 2015, NJWeedman and others performed a smoke-in at a Trenton City Council meeting, after a resolution to legalize cannabis died on the floor, and NJWeedman repeatedly called the City Council members "cowards."  This act didn't put many City Council members in NJWeedman's corner.  Gov. Christie is a big suspect in NJWeedman's current despair.  They became acquainted with one another in August 2003, when NJWeedman was arrested three times outside US Attorney for NJ Chris Christie's office in Newark, for carrying a sign that called Christie a "hypocrite."  Since then NJWeedman has been a thorn in Christie's side, leading to numerous smoke-outs at the State House from 2014-2016, and other forms of confrontation between the two men, like on March 23, 2015, when NJWeedman followed Christie to a radio station and confronted him in the parking lot, requesting that Christie “stop arresting people for marijuana.”  Christie replied back:“Why don’t you go call President Obama?”  Christie is currently placing his chips in the Trump campaign, and is doing all in his power to come off strong and competent, but unable to be either of these things at any given point, he has chosen to beat up on the underdog like the bully he is.

NJWeedman friends and fans in disbelief after the raid. Photo by NJ.com, April 27.

As of now, it is suspected that NJWeedman and the Joint Boys may have a hearing for bail at Mercer County Courthouse on Thursday morning, April 28.  NJWeedman's daughter informed the Trentonian that the charges against her father were possibly going to be "related to intent to distribute marijuana," but she was unsure of the exact charges he faced. Bail for NJWeedman could be as high as $50,000, according to one source. It is still unknown of what will happen to NJWeedman's businesses or what will happen to NJWeedman and the Joint Boys.  But it seems the future will be faced with tons of jail support and protests over the injustice served on a daily basis in the world of marijuana prohibition. 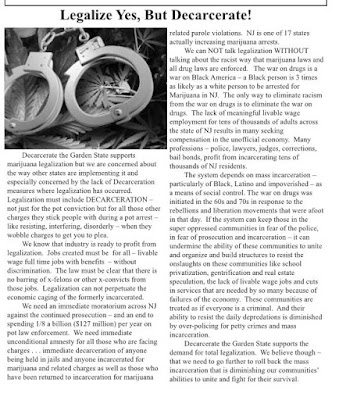 Comments from Bob Witanek of Decarcerate the Garden State:

Stay tuned - we need to begin to pressure the Mercer County Prosecutor's Office as well as our local Assembly and Senators and Governor Christie to vacate the charges against Ed Forchion and the others arrested at the Weedman's Joint.  Start writing the letters now.  We will have details shortly as to what the demands should be on the Prosecutor's Office.

I recently joined the march through Trenton on April 20 demanding legalization in NJ and was able to distribute about 200 copies of the latest issue of The NJ Decarcarator.
The Weedman's Joint restaurant invited our organization to leave papers there - indeed there was a bundle of 200 there at the time of this raid and it remains to be seen if we will be able to retrieve those papers.  Our organization has worked with "The NJ Weedman" and the proponents of legalization - and we have emphasized the need to couple the demand of legalization with equal importance to the demand of Decarceration of all those who have been convicted or are facing charges related to cannabis in NJ - and that would include automatic expungement of records, dismissal of any fines levied, immediate release from any sentences or pre-trial jailing and the dismissal of all pending charges.  These arrest provides an exclamation point to that demand.  The article depicted at left is from page 8 of the current issue of The NJ Decarcerator and it makes this point.  Above is a video of my presentation at the 2014 Cannabis rally at the Statehouse calling for legalization.