Mumia, Medical Neglect and Deprivation in American Gulags: A Case of a NJ Incarcerated Youth 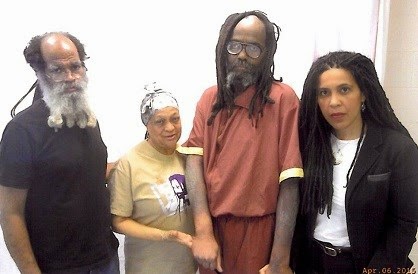 The horrendous medical deprivation of Mumia Abu Jamal that has led to the severe degradation of his physical health and placed him in a potentially life threatening situation shows that the state of Pennsylvania and its prison apparatus is hell bent on carrying out the execution of Mumia it was denied due to the political and legal challenges of the very flawed trial and penalty phase that sentenced him to death – a sentence that was overturned some years ago.  For more information:

The idea that the state of Pennsylvania would attempt to murder Mumia Abu Jamal, an internationally known and supported political prisoner with 1000s of supporters in the USA and around the world should demonstrate to us the arrogance and lack of concern that prison authorities have for the rule of law and respect for human rights.  For if Pennsylvania would attempt a hit – through the act of medical denial and neglect - on such a high profile political prisoner, consider the prevalence of such action by corrections authorities and corrections officers on the hundreds of thousands of prisoners whose names are not so well known around the US and world!

At a recent event sponsored by our organization Decarcerate the Garden State, a member was in attendance and she shared information about the treatment of a family member incarcerated at a NJ juvenile facility.  For the purposes of this article, the identity of the person will not be revealed.   Permission was granted to write about the situation.

This organization member spoke up at our event and she stated that there were several announcements one day at the facility, according to her relative, about the water.  They first announced that it should not be drunk, then that it should be and then again that it could not be drunk.  There was no explanation as to what the exact issue was with the water.  Shortly there after this incarcerated person became very ill.  The following is a written account of the challenges that this person had getting care and the resulting medical situation from the delays and denial of care.  Whether or not it was linked to the water, the delays certainly compounded the condition.

This is just one example – no doubt there are 1000s of such experiences, some less severe and some more severe, in NJ alone.  The following account is taken from the written account of this incarcerated person but exact dates and exact details withheld to protect his identity:

The first day he felt stomach pain leading to nausea.  It was not until 5 days later when he was first seen.  He was put on a 24 hour liquid diet which did not help and he received no medicine.  The pain continued and the next day he again submitted a medical request (day 6) but was not seen until day 8 - no medicine or treatment was provided and two days later (day 10) he submitted another form and was seen the following day (day 11) - again no treatment or medicine.  He was then put on the doctor list and finally saw a doctor 4 days later, on day 16.  He was given nausea and diarrhea medicine which did not help and might have made matters worse.  5 days later, now day 21, he was rushed to the hospital after he ended up on the ground vomiting, hyper ventilating with dark red blood shot eyes and severe chest pain.  He was in the hospital for 3 days and then placed in the infirmary for another day.  At the hospital he was receiving antibiotics via IV and in the infirmary it was switched to pill form.  He was brought back to the hospital for vital tests and blood tests on days 25 and 26.  Then on day 29 he developed chest pain and was put on pain medicine and ended up going back to the hospital on day 31 for a CT scan.

This person ended up being diagnosed with pneumonia.  If you are not aware, pneumonia can kill you if you do not do something about it.  Generally you need antibiotics to fight it.  It is not one of those things that the body can generally take care of on its own.   The longer you wait to address it, the sicker you get and the longer and harder is the fight to defeat it – and the greater the likelihood that you can succumb to it.

This person was the victim of medical neglect.  Was it due to some sick retaliatory scheme by corrections officials?  Perhaps it was not.  It could also have been typical delay and denial tactics of authorities for the purpose of cost savings, or general lack of caring, to show “who is boss”, due to incompetence or some other irresponsible reason.  The motivation of the delays and denials does not really matter as it has the same impact nonetheless – to endanger the health and very life of the prisoner.

There are many ways that the carceral system in the US can kill a prisoner.   Like the police that seem to be rampantly killing mostly unarmed civilians on the streets, corrections officials and officers largely have impunity.  Inside the prisons it is even worse since there are rarely witnesses and there never is publicly available video of the incidents.   Since the prisons control every detail of the lives of the prisoners there are also many more ways to inflict harm and death on prisoners.

Decarcerate the Garden State is interested in continuing to expose the mistreatment of incarcerated persons by NJ state and local corrections.   It is part of our 6th point of action to bring about two way communication between the incarcerated and those of us on the outside that are fighting to change the mass incarceration equation.  If you know of such stories or you know incarcerated persons that want to share stories of what is going on on the inside – do share the information and encourage them to share the information.  We can keep names out of it if need be.  Also we welcome submissions to our blog from incarcerated persons.  (Send submissions to Decarc@DecarcerateNJ.org ).

In order to fully facilitate the  information flow, we really need to implement the strategies discussed in the following article.  Please contact us if you have any questions or to let us know that you are working on this:

Poking A Hole in the Prison Wall – Writing to the Incarcerated in NJ http://decarceratenj.blogspot.com/2015/03/poking-hole-in-prison-wall-writing-to.html

Meanwhile, we need to prepare ourselves to be willing to respond in many ways to crises inside facilities be it through calls and letter writing or even mobilization when needed.  Things are going to heat up around these issues in the months and years ahead – we need to prepare for this fight!
Posted by Bob WItanek at 6:18 PM