Two days ago I launched a petition opposing the deployment of NJ State Troopers by Governor Christie to occupy the Baltimore community in response to coordinated youth resistance after authorities have refused to arrest the 6 police officers responsible for the murder of Freddie Grey whose spine was severed while in police custody. 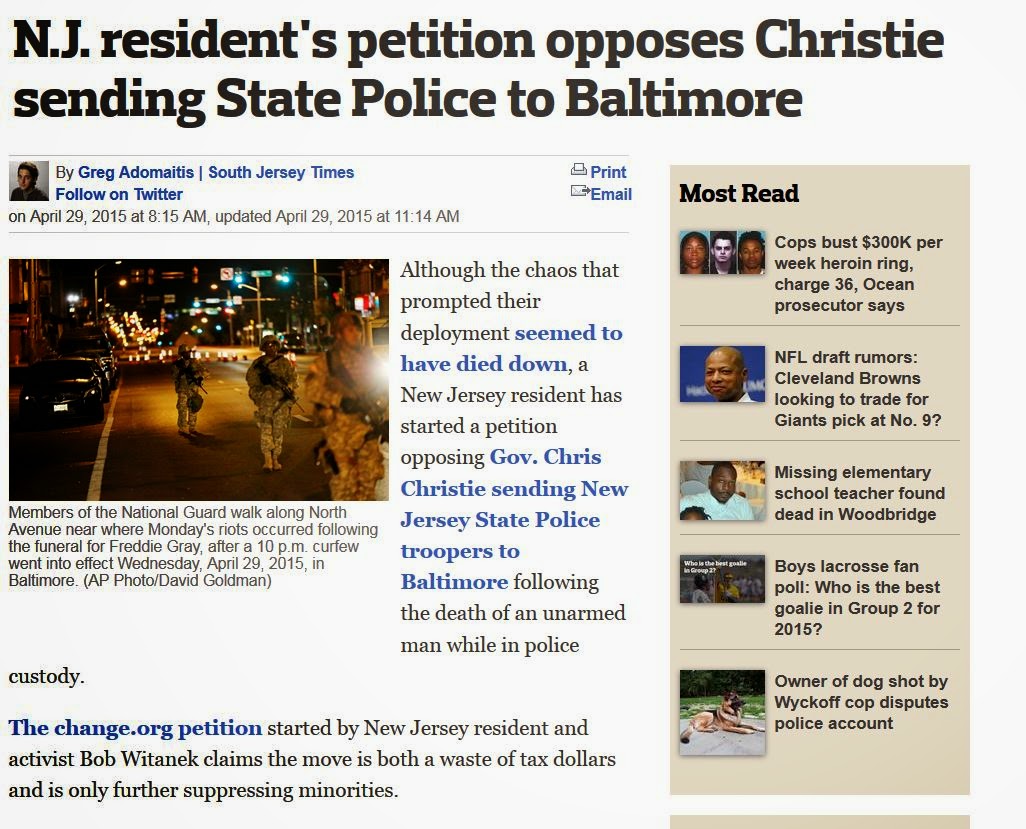 Yesterday morning I thought it might work to get the idea of the petition into the news media since the media is apparently hopping for Baltimore related coverage so I shot the link out to dozens of reporters that I have been sending press releases to.  That resulted in two pretty awesome articles about the petition – which in turn resulted in many more people becoming aware of it and signing.  It also touched off the usual firestorm of border line KKK mentality comments underneath the two articles.  (Amsterdam News has not been hit by the racist commenters union.)

In another creative bit of resistance by NJ in solidarity with Baltimore, New Brunswick residents and Rutgers students united to confront Governor Christie at a bill signing ceremony in New Brunswick and their chants against deployment of state troopers to Baltimore drowned out much of his grandstanding resulting in several more news articles on the topic of NJ resistance to the deployment.

The following is the text of the petition – please click andsign:
STOP DEPLOYMENT OF NJ STATE TROOPERS FROM JOINING THEOCCUPATION OF BALTIMORE 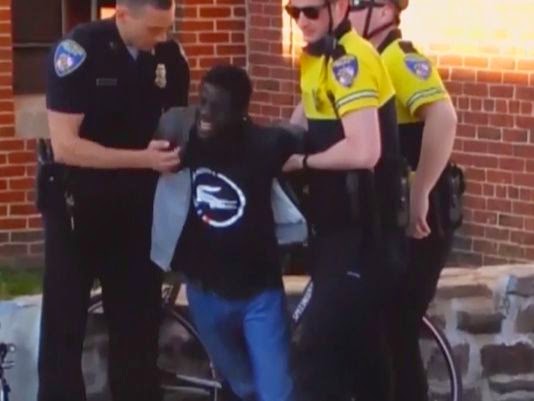 It is being reported that NJ will be sending over 100 state troopers to join the occupation of Baltimore and the repression of the youth led uprising there.

After a parade of killings with impunity by police across the whole country, many of them captured by video camera and broadcast across the country, and after months of #BlackLivesMatters nonviolent protests, civil disobediences, meetings and gatherings of all sorts, youth of Baltimore organized a concerted active resistance in response to the police murder of Freddie Gray whose spine was broken in police custody. This was after days of non-violent protests, including a march of 10,000, demanding the arrests of the police perpetrators.

The rebellion has captivated the orchestrated US media with most attention focused, not on the decades of deprivation, poverty, mass incarceration and abuse and killings with impunity by police that preceded the rebellion but on demonizing the responsive actions of the super oppressed of the Baltimore community. Now everybody that has not cared in the least about the massive killing by police with impunity has an opinion about the response of the people of Baltimore.

That NJ tax dollars are being spent to provide repressive means to occupy the Baltimore community and to join the suppression of a rebellion that is the result of decades of multiple forms of super oppression – not just against Baltimore – but against Black and Brown and impoverished communities across the entire USA is only part of the reason why the people of NJ should oppose the deployment.

NJ still has not fully funded the public schools, is withholding funding for pensions, has cut funding to cities, nursing homes and other infrastructure yet NJ can afford to deploy hundreds of state troopers to Baltimore for occupation duties!

The Baltimore rebellion is also a training ground for police militarization and counter insurgent type operations. The NJ State Troopers along with police forces from throughout the eastern seaboard will be field testing technology and tactics. They will be preparing for the eventuality where similar means are deployed in NJ and elsewhere.

We hereby call upon Governor Christie to immediately halt the deployment of NJ State Troopers to join the occupation of the Baltimore community and further to immediately withdraw all NJ State Troopers already deployed. We call for instead, full funding of NJ’s public schools, pensions, nursing homes, homeless support, other human needs and NJ’s cities.

After 2 days – 500 people have already signed and the petition is still growing.

Meanwhile, already the Christie Administration has announced that the deployment to Baltimore is already being extended:

Meanwhile – reports are coming out of Baltimore that arrested Baltimore youth are being faced with $500,000 (one half a million) bail and some are likely to face the prospect of life or decades imprisonment.

Thus the deployment of NJ State is *bolstering the repression* of the resistance to impunity for police that brutalize and kill unarmed civilians.
The petition obviously links up the issue of opposition to the deployment to the funding issues of NJ – and that connection is not lost on many of the signers based upon their comments:

“If we can't afford to pay our state pension recipients, who will front the costs for our state troopers assisting in another state?”
“With the budget deficit issues and the concerns about funding state employee pensions (which are mandated by law) Christie decides to spend $800,000 on a political stunt.”

There are many reasons given by the signers including concerns of costs, the need for the funds in NJ, the concerns that police are needed in NJ instead, the idea that NJ should not contribute to the repression of the Baltimore community.

When I was interviewed for the article in the SJ Times I offered the idea that youth who are resisting see themselves having no future and nothing to lose.  As I was quoted:

“If there had been arrests of those officers, the youth would not have done what they did," Witanek said. "Their future is bleak, they're in free-fall," he said, adding what's to lose when incidents similar to Gray's death continue to happen, you feel marginalized, don't have a job and your house doesn't have plumbing.”

Interesting that I had hit on this plumbing issue because shortly thereafter this link showed up about Baltimore  following Detroit’s lead of turning off the water for impoverished residents that can not make the water payments.  What this means is that the NJ State Police are not only there to control resistance and protest of killing and brutality by police with impunity – they are there to enforce repressive measures to deny Baltimore people access to the bare necessity of water.

http://portside.org/2015-04-29/baltimore-shutting-water-thousands-while-ignoring-corporate-debtors
The deployment of NJ State Troopers to Baltimore parallels initial commitments of US soldiers to war.  It usually is presented first as a short term commitment and soon extended – already the initial 3 day deployment has been extended to next week.  The troopers will be learning how to militarily occupy and control a community that is in the midst of unrest.  They will be field testing technology, tactics and equipment.  They will also be an impediment not only to Baltimore’s resistance to brutal and dirty policing but to economic injustices like massive unemployment, lack of support for services to the super impoverished and also the push to shut the water off for impoverished residents.

We need to continue to promote the petition and other means to demand that NJ get out of Baltimore – like the protests that occurred yesterday – in solidarity with the people of Baltimore but also in our own defense as the deployment will further militarize NJ’s police for potential use against us here should we pose any challenge to the distorted priorities in this state in favor of the billionaires and against the growing impoverished of NJ.
Posted by Bob WItanek at 6:27 PM