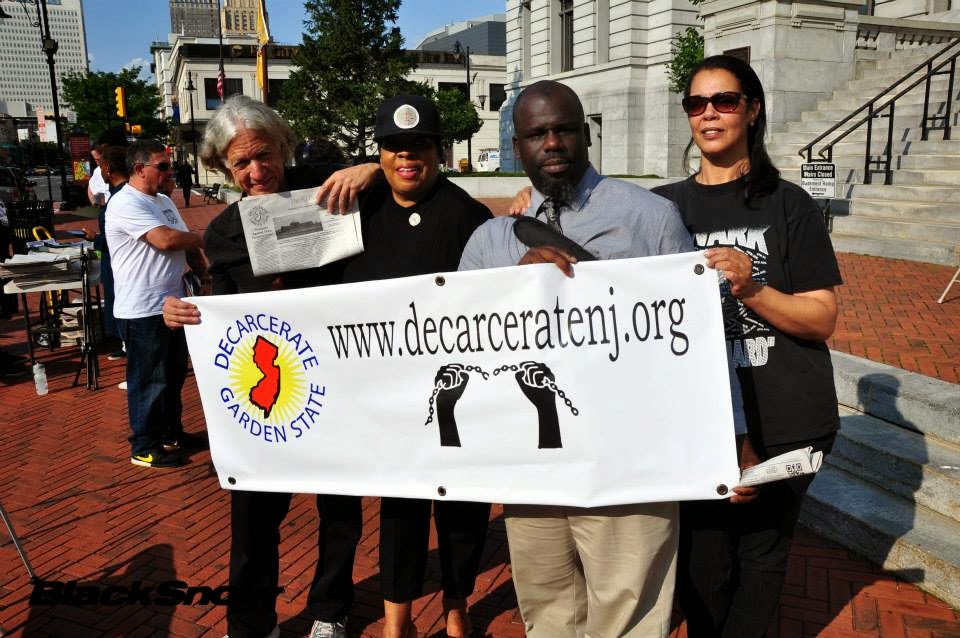 Decarcerate the Garden State has a 6 point plan of action to carry out our demands per our name - to decarcerate NJ.  See: http://bit.ly/1DuI5Uj .  If you are interested in participating in ANY aspect of our work – do not hesitate to contact: Decarc@DecarcerateNJ.org or 908-881-5275.

There are many mini-projects and activities of Decarcerate the Garden State that are afoot.  In order to assure their maximal success and also to increase the potential for more activity, this series of articles will spell out in more detail all of the various efforts – in hopes so that our members and supporters can better understand and hopefully participate in the effort.  This first part focuses on our Tour de Decarcerate, our Youth Section and a proposal to develop a project focused on incarcerated women.

Currently this is our most active effort – not that it is more important than the rest of our efforts but it has gained traction and garnered support from individuals and organizations in locations around the state.  The goal is to coordinate and participate in as many as 30 events around the state in 2015, mostly panel discussions either outside on the streets or in public facilities that accessible to communities, particularly those communities that have been targeted by mass incarceration.

We already had one major event that was successful in many ways – in Camden on January 24.  The best way to recap that success is to link to the full report with full video coverage at this link: http://bit.ly/1JwsKGv

Our next event is 2/24, 6pm at the Plainfield Public Library in partnership with the youth group KYSS and other community forces – facebook event: http://on.fb.me/18FCbX5 - more background: http://bit.ly/1tRc4We
- press release: http://bit.ly/1CqcyWn

We have just made tentative plans with our new partners Glasboro Students Union for an event on the Rowan Campua in Glasboro, NJ, 7pm, Friday, March 6.

Beginning steps have been taken toward an event in Bridgeton. (Jamie Warner)

Other potentials that have been mentioned (and I will only mention first names for now): Perh Amboy  Ruben, Asbury Park Nyambi, Montclair, Hillside Keith, Newark (we should do 3 – 4 in Newark), Camden (at least 1 – 2 more) Gary, Ras, Moneke, Allen, Trenton – Queneke, Paterson, New Brunswick, Franklin Park – among others . . .

FIRST STEPS OF ORGANIZING A STOP OF TOUR DE DECARCERATE

Have a local person that can call an initial organizing meeting.  At the initial organzing meeting it is probably best to have at least 4 or more people from the local community – but more is better and having representation from the local fighting organizations is ideal.  The things that need to be determined at the meeting:

1. Is there agreement to do the event and enough agreement among the local constituents to actually carry out the local tasks involved.
2. Tentative date of the event and tentative location (or dates / locations).
3. A general agreement on the general format of the event.
4. A plan for going about determining how the speakers will be selected , who will do the press release, and how things will be communicated going forward and if additional meetings are needed.

If those points can be agreed upon and determined – then it is a go.
Anyone interested in exploring potential for bringing our traveling panel discussion to their community should contact us immediately at Decarc@DecarcerateNJ.org or 908-881-5275.

The Tour de Decarcerate should establish working committees in each city that carry on after the events to continue to plan educational activities and be prepared to join in a statewide vigorous raising of demand for NJ Decarceration Act later in the year – perhaps in October.

Through our partnership with Plainfield KYSS we have been able to launch a Youth Section of Decarcerate the Garden State.  Nia Ali initiated the effort in an address to Students of Color retreat of United States Students Association. http://bit.ly/1ypOVHe  Plainfield KYSS is also working with us on Tour de Decarcerate event at the Plainfield Library scheduled for February 24 – we are hoping to mobilize youth from area campuses as well as the high schools and the streets to this event.  We are developing a youth oriented survey on attitudes and fears regarding mass incarceration that we hope can help us identify a core throughout NJ’s youth that are ready to help lead the rising against mass incarceration.  We hope to gather contact information from those interested in getting involved that we can use as an organizing basis for a statewide youth section of Decarcerate the Garden State.

Critically, we need to set some goals as to having a presence at every campus, county, state and private in the state and possibly having an activity at at least 10 of them in 2015.  We need to also have street events and targeted outreach to high school aged youth as well as outreach to visitation days and otherwise to families of those held in youfh facilities.  Students and youth that are interested or others who have connections or want to support the youth component of Decarcerate the Garden State, or have contacts with activists, faculty or student groups on campuses that might help should contact Decarc@DecarcerateNJ.org / 908-881-5275.

Munirah Bonami has implored our organization to do some focused work on mass incarceration of women. http://bit.ly/168DtI8  There is at least one other member who has contacted us to specifically work on this focus.  Women in NJ are incarcerated at  Edna Mahan Correctional, in Clinton, NJ.  We could consider an outreach effort with literature distribution at the facility and possibly a coordinated meeting in that vicinity.  We can possibly connect with families to invite them to join our efforts calling for decarceration and at the same time, learn about the specific challenges and abuses taking place there to activate our justice committee around specific demands and support.  This would be a significant undertaking and ideally it would be helpful if we had support from that area of the state as well as a committed focal point within our organization.  Those interested in joining a project around support for NJ’s incarcerated women should contact Decarc@DecarcerateNJ.org / 908-881-5275.

Future parts will delve further into above topics as well as reinvigorate the issues of the NJ Decarceration Act, our Justice Committee activities, our Next Newspaper and Social Media Effort, our Study Group and internal decarceration knowledge and expertise development and concrete plans to develop direct communications between our movement, the families of the incarcerated and the incarcerated themselves.  Stay tuned!