"Decarcerating Plainfield and NJ Youth" will be the theme of a panel discussion at the Plainfield Free Public Library on Tuesday February 24, 6pm in the Louise Davis meeting room.

Several local and statewide organizations are joining forces and inviting the public to participate.

Plainfield Keep Youth and Streets Safe (KYSS) which was formed to call for an end to street violence in Plainfield, the statewide Decarcerate the Garden State, Plainfield Peoples Organization for Progress and the Plainfield View blog site edited by David Rutherford who is also a newly elected school board member are joining ranks to bring this discussion to town.

According to a Facebook event announcement, they have joined forces to co-sponsor a panel discussion on the impact of mass incarceration on the city of Plainfield and on the youth of New Jersey.  They plan to also discuss "the need for a unified movement to bring about the end of the destructive system of mass incarceration and the need for youth to be at the forefront of that effort."

This event is absolutely free and open to the public.

A key note presentation of a broad over view of the mass incarceration issue will be provided by Rev. Charles F. Boyer.  He serves as Pastor of St. James AME Church in Somerset, NJ.  He is a social justice activist with a focus of calling the Black Church back to its liberationist roots, particularly regarding mass incarceration.  He currently serves as Coordinator of the Covenant Project to Eradicate Mass Incarceration, a joint project of the Social Commision of theAME Church and the Payne and Turner Theological Seminaries.  He also mentors Somerset County Returning  Citizens, serves with the NJ Campaign Against Isolation Confinement, collaborates with various organizations as  such as theNJ Institute for Social Justice, the National Religious Campaign Against Torture and the United Methodist Board of Church and Society’s Faith in Action.

Sabrina Lyttleton, a co founder of the Plainfield KYSS organization will speak on mass incarceration youth related issues, the school to prison pipeline and the need for youth involvement in the decarceration struggle.

Also speaking will be Steven Hatcher, a representative of the Peoples Organization for progress, who will give information about the Million Peoples March Against Police Brutality and Economic Inequality that will take place in July in Newark and Bob Witanek of Decarcerate the Garden State who will address the 6-point plan of action of the statewide group.

The organizers also hope to use the event to launch a survey of the youth of Plainfield and beyond about the attitudes, fears, and understanding of the mass incarceration issue.

“This fight is personal” says Sabrina “I’m raising a son in a society that is designed for him to fail. What kind of mother would I be if I didn't fight for his rights? It’s every mother’s responsibility to protect their child the best they can. My involvement in this struggle is me protecting my child.

Nia Ali who previously spoke at the Tour de Decarcerate says “Learning all that I’m learning now….I feel like so much has been kept from me. ….it’s my responsibility to share with the generations after me so they aren’t kept in the dark”

For more information,s please call David Rutherford, (201) 637-3575 or e-mail
Sabrina Lyttleton at Sabrinalyttleton@yahoo.com
More information on the event is at the Facebook event page https://www.facebook.com/events/1402605013368124/ 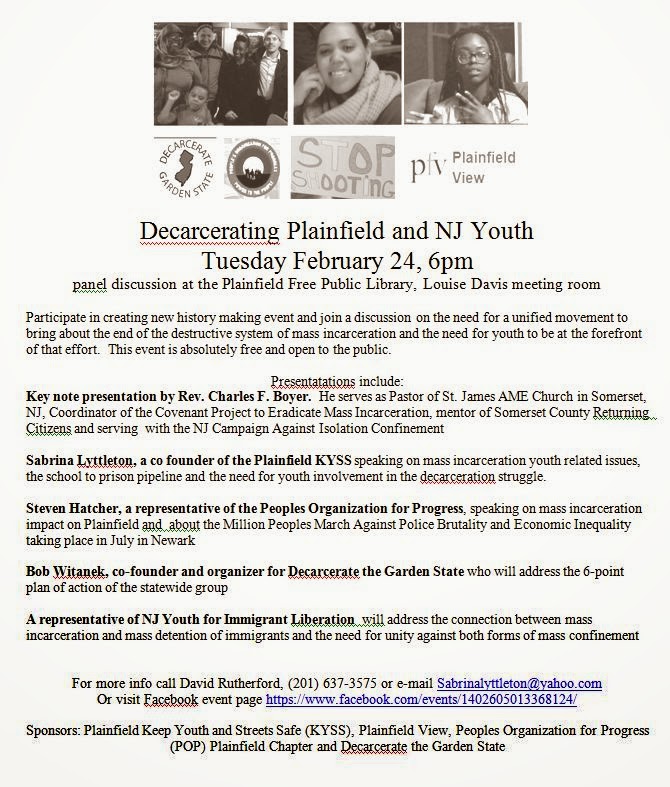