Caging of Ota Benga – Ancient US History or Earlier Chapter in Continuing Legacy of US Mass Incarceration?


Here is a chapter of US history that most are likely unaware of and many would prefer not to think about.  I found the reading of this article to be disturbing.  At the risk of coming across as guilt possessed, I was literally driven to tears as I read. 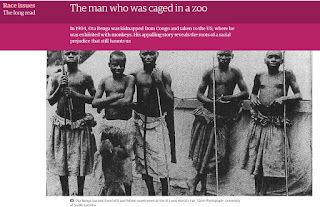 http://www.theguardian.com/world/2015/jun/03/the-man-who-was-caged-in-a-zoo
The article states in its sub caption:
“In 1904, Ota Benga was kidnapped from Congo and taken to the US, where he was exhibited with monkeys. His appalling story reveals the roots of a racial prejudice that still haunts us.”

While I credit the author of the article in bringing this story to the forefront, and for the in depth retelling - I believe the sub head to be an understatement – it was not just racial prejudice here that is the issue but systemic white supremacy.

I suggest that the story of Ota Benga is not an ancient relic of a bygone chapter of US history but that it is more an earlier episode of what continues today – mass incarceration.

What are some of the parallels?

Ota Benga was kidnapped from Southern Africa and caged like an animal and it was justified under the guise of scientific inquiry.  Likewise, mass incarceration, and the policing and prosecution methods like Broken Windows, Stop and Frisk and the like of today are justified by scholars, volumes of articles, books, college course work and the proponents of these policies are treated as  experts in the media.  These policies have targeted literally millions, mostly Black, Brown and impoverished and result in an incarceration rate in the US that is literally 4 times the world average.

But this was different – right?  This was taking a caged young African man and putting him on display for 100s of 1000s of racist whites to come at gawk at in the Bronx Zoo in New York City, to gush about in news bloviations at such esteemed publications as the New York Times about how it is the right thing to do, for esteemed scientists to grandstand in support of . . . Surely that is nothing like mass incarceration.

OK – so the prisons in the US are not like the Bronx Zoo.  Racists can not bring their families there to gawk at the incarcerated and laugh and point and taunt as if they are caged animals – right?

The caging of Ota Benga had another purpose to serve . . . a message to Black Americans of that day that white supremacy truly believed that they are subhuman or at least a lesser human species.  The message was endorsed by all the politicians, scientists, zoology officials and media editdorialists of the day.  Mass incarceration and the narrative that supports it today has a similar subtext toward Black Americans of today's era.  The system wants Black Americans to understand that they are to forgo any hope of challenging the power relationships and that the system will continue to design laws and build more cages to keep them in and to threaten them with so they dare not challenge status quo through resistance and struggle.  As far as those that are in power and that control much of the media narrative are concerned, with some exceptions, Black Americans as a whole are largely predisposed to criminality and need to be controlled through policing and incarceration. 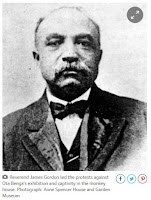 If we watch the shows - like the zoo visitors of the prior century – and we don’t pick up the fight to end mass incarceration immediately – like those that campaigned to free Ota Benga back in the day, like Reverend James H Gordon and those that worked with them, then we are akin to the flock at the zoo, gawking bringing our children, laughing, chasing, taunting  and mocking Ota Benga.

If reading this article moves you in any way – then you should join our fight – to free the 1000s of those who like Ota Benga are now caged like animals due to the racist system of mass incarceration, racist policing , prosecutorial and sentencing practices – as a means of social control to protect the interests of those that benefit from the current social power relationships.  Join the battle cry to Decarcerate the Garden State – find out how: Decarc@DecarcerateNJ.org .
Posted by Bob WItanek at 10:32 AM