It started with the persecution of Marylin Zuniga.  She is the elementary school teacher whose students wanted to send get well cards to Mumia Abu Jamal, a former death row incarcerated man who was convicted in a sham trial over seen by a judge with proven racist beliefs.  Mumia Abu Jamal has been denied access to adequate health measures and has been subjected to medical and dietary neglect resulting in severe health deterioration.  Ms. Zuniga allowed some of the students to write cards out to Mumia as an after class work voluntary activity.

The Philadelphia Fraternal Order of Police, a scandal plagued organization whose members have been involved in police violence, drug related scandals and other corruption complained about it and the media broadcast the complaints resulting in a massive backlash agains Ms. Zuniga and ultimately to her being removed as a teacher – inspite of massive community protests in defense of her.

Now the stage is set in NJ – the police are getting to the point of calling the shots of what is acceptable discourse in the halls of NJ public high schools.  In at least two cases so far, police have intervened in attacking educators and high school students – one case an art class project and in the other case a humanitarian class project.  The pressure from the police is effective – both in intimidating administrators to the point of acquiescing to the police demands and also in creating a chilling effect where administrators, educators and students will likely think twice before freely expressing their views about the violence and impunity emanating from today’s policing. 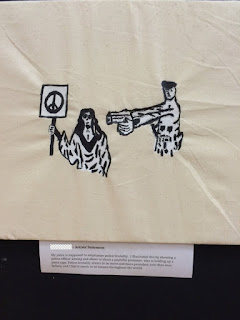 First there was an art project at Westfield High School.  Students there expressed themselves artistically in pieces that were themed around the protest of the ongoing killing with impunity –
throughout the USA as well as in NJ.  News report:
http://www.nj.com/union/index.ssf/2015/05/nj_student_art_depicting_police_brutality_goes_vir.html 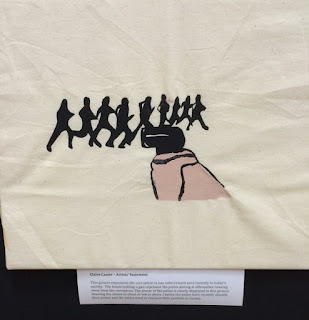 In this case the art was exhibited for a couple of days at an art show and police and media went haywire that students would dare to criticize police impunity.  By the time the superintendent responded the art show was over so no repressive measures were taken to censor the art.  A superintendent letter was issued attempting to clarify the situation – and contain the controversy:
https://www.tapinto.net/towns/westfield/articles/westfield-school-superintendent-responds-to-criti
I have to give the superintendent credit for tactfully rebuffing the attempts to attack the art exhibit – hopefully though it will not result in suppressing future free expression by students at Westfield High School.

The more recent flare up does not have such a result however.  In this case it was a humanities class in which posters addressed several sides of policing issues – including critical of police killings with impunity –on the hallway walls of the school.  Once again – cops – perhaps emboldened by Marylin Zuniga affair and the Westfield “controversy” rallied against students daring to say anything at all critical of the police.  This is occurring  - mind you – at Clearview Regional High School in Gloucester County – near Bridgeton – the site of the police shooting and killing of Jerame Reid on December 30, 2014, as he held his empty hands out the car window and Vineland, where Philip White died in police custody after police had him mauled by a police dog.
http://www.nj.com/gloucester-county/index.ssf/2015/06/nj_high_school_calling_for_policy_change_following.html

Unfortunately in this case, the superintendent is trying to modify school policies regarding classroom projects.  The district also removed the project “immediately” from the walls of the high school.  The censorship resulted in taking down all of the materials – including  materials about feminism and the environment. 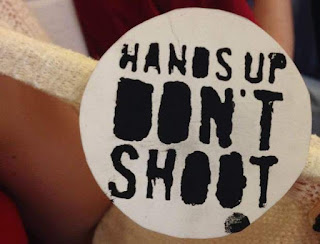 To the credit of the students there – they actually had a protest inside the school:
http://www.nj.com/gloucester-county/index.ssf/2015/06/nj_students_protest_over_alleged_censorship_of_pol.html 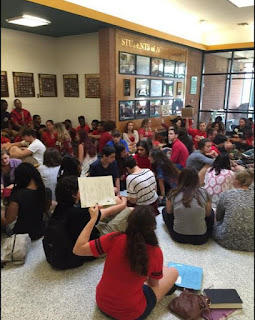 That school boards like in Orange, and administrators at schools like at Clearview Regional High School, NJ are folding up in face of intimidation by police organizations is an alarming development.  Police now are fulfilling their role more as an occupier force – not only patrolling communities, enforcing laws that criminalize poverty and the impoverished and regularly introducing hyper and deadly violence – now they are attempting to control the discourse in the schools and trying to make sure that #BlackLivesMatter and other grassroots community resistance is not manifest in any way in the voices of the high school students and that educators are intimidated from creating the kind of environment that fosters free discussion where critical thinking can occur and students can develop their own voices.

Meanwhile, NJ is mobilizing for a potentially historic Million Peoples March Against Police Brutality on July 25 in Newark:
https://www.facebook.com/events/418074548350082

The best way for students to deal with these attempts to shut down critical thinking and to knuckle under to attempts by police and their bully “unions” is to spread the word about the statewide march in the high schools of all 600 plus districts.  Hand out fliers.  Do it quietly and discreetly – on the buses – outside the buildings, use social networking.  That students on their own are taking initiative to raise these issues inside the schools is a hopeful sign.  As they, and any teachers that are creating space for their voices come under attack – they need to know we have their back.

Decarcerate the Garden State calls upon supporters to contact the Clearview Regional High School and demand that there be space for student voices of dissent from the police impunity from justice and the other issues of concern expressed by the students.  The district must not cow tow to attempt by police to bully the education process and stifle free critical thinking by the student body.