We at Decarcerate the Garden State are very concerned about any attempt by state apparatus or extraordinary forces to use violence and threats to intimidate opposition to wanton killings by police and mass incarceration.  This development in Baltimore - a hotbed of resistance to the epidemic of police killings of unarmed men and women needs to be publicized and we need to be prepared to mobilize against threats and acts of violence aimed at silencing resistance.


The Baltimore Peoples Power Assembly and Southern Christian Leadership Conference Call for Friday, June 5, 2015 Press Conference at 1 P.M. at 2011 N. Charles Street, Baltimore, MD 21218 to Announce and Release the Following Statement in Response to Organizer’s Car Being Shot Up – 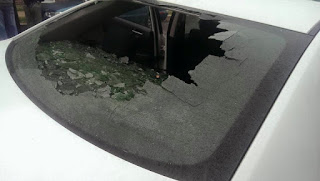 “To the Baltimore City Police Department and all concerned: We will not be intimidated, silenced or stopped! Our organizations and organizers will continue to stand strong until justice is won for Freddie Grey and all of the victims of police terror. We look forward to a strong and united Peoples Assembly and Tribunal on Police Terror called for this Saturday on June 6th.”

This past Tuesday, Sharon Black’s car was shot up with what appears to be a 357 magnum weapon, bullets went through several layers of steel from back to front, aimed at the driver’s head rest. The rear window was also shot up. Black, her son Steven Ceci, a guest from South Central Los Angeles, John Parker, were at her East Baltimore row home when all three heard 5 to 6 gun shots several yards from their residence at approximately 11 P.M. Tuesday night as they returned from work at the PPA’s nearby offices.

This attack is combined with a series of threatening phone calls to both the PPA’s phone line and Black’s personal phone, including a barrage of robotic attacks to both phones and disruptions to the organizations communications systems. 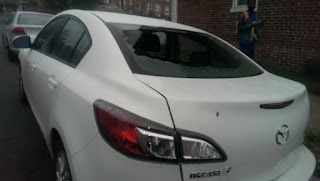 Sharon Black, PPA organizer and Rev CD Witherspoon, SCLC President jointly stated, “We take this attack and other threats very seriously and want to send a clear message to the Baltimore Police Department, the Fraternal Order of Police (FOP) and any and all forces that may wish us harm, that we will not be intimidated, silenced or stopped in our continuing fight for justice for Freddie Grey and all victims of police terror. We want to say to all of our concerned friends and supporters: We are stronger than ever and look forward to a vibrant and productive assembly this Saturday, where we will not only hear from the victims of police abuse but plan our next steps toward ending police terror and winning jobs and livable wages now.”

From the description of the event:

We are joining hands with our sisters and brothers across the country that are holding tribunal sessions on police terror and structural racism. Come out to testify, speak out! Have you been abused or beaten by the police? This will be your opportunity to speak out.

Are you a student or a member of the community who would like to concretely support the struggle against racism and police terror, come out and learn what you can do to help.