This is an emergency alert:

Please call Warden Daniels at Staton Correctional in Elmore Alabama 334-567-2221.  There was a beat down apparently on an incarcerated man named Mr. Joseph Grant.  He was beaten by multiple correctional officers today.  Demand that Mr. Grant be allowed to call his family and demand that he be allowed to complete a USE OF FORCE STATEMENT.

As more details are learned they will be added to this emergency alert.

From Free Alabama Movement:
" At this time, we have been unable to receive any information about his well-being or whether he is receiving appropriate medical attention."

The following account of the incident has been provided from the Free Alabama Movement:

"The officer that started it is named Murphy. Earlier, it was raining and Joseph was trying to get out of rain and Murphy pulled his spray and Joseph ran and Murphy called him punk etc they exchanged words and Joseph went to his dorm and Murphy was over heard saying " I’m gonna get that motherfucker."

He went to his dorm got him handcuffed him took him to the laundry and beat him. Lt. Sewell and the crew here have been beating inmates all week but they are afraid to say anything because they might have inmates working for them as well. I got here on April 6 and I have witnessed a murder and more fights and police beatings of inmates than I have seen in my entire 28 plus years of being in prison. On Monday a black half blind inmate in his bed was sprayed by a white officer who said it was a mistake.  It is very bad here, the police brutality.  It needs attention.  It is getting worse and the warden don’t give a damn."

Past reports on Free Alabama Movement: 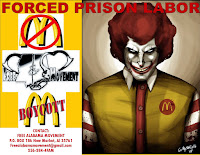 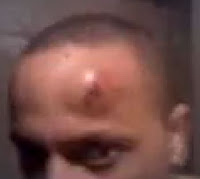 St. Clair (AL) Incarcerated Under Lock Down - Under Brutal Repression