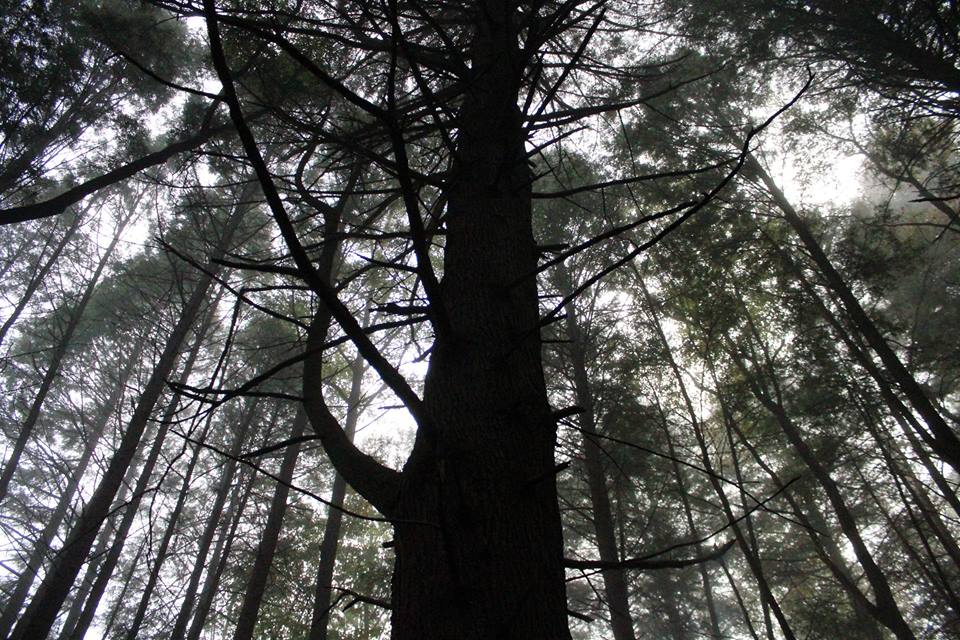 A towering hemlock tree deep in the heart of the Lilley Cornett Woods. Photo by J. Mazurek
-by Jordan E. Mazurek / Campaign to Fight Toxic Prisons

Early Kentucky twilight trickles through the canopies of towering trees, softly illuminating the post-dawn fog as we fill our lungs, gulp after gulp, with the cool, sweet air of one of the last vestiges of old-growth forest in the country. Each step up a path so unobtrusive that only our guide can see it takes us further into the heart of the Lilley Cornett Woods. Clear cutting for logging, coal mining and mountaintop removal have, at one point or another, decimated nearly every last inch of forest in Kentucky.

The thickness of each trunk whispers of how, centuries ago, its seedling first tasted the sweetness of the soil as it shot out the roots that we now step, and gently stumble, over. A bastion of biodiversity, this small, sacred patch of old-growth, 252-acres in total, greets us at every twist and turn by American Beeches, Eastern Hemlocks, Chestnut Oaks, Hickories, and over a hundred more species of trees. Within their shadows 530 species of flowering plants bloom, above our heads over 700 breeding pairs of birds find refuge in the dense branches, extending over every ridge and into every valley a dense network of flora and fauna thrives.
Unfortunately, we are not here to solely soak in this woods wonder, but are working as part of the Campaign to Fight Toxic Prisons to figure out how to protect it. The Lilley Cornett, maintained by Eastern Kentucky University and owned by the Department of the Interior, is the longest preserved of only three old-growth forests left in Kentucky, and danger is literally on the horizon. “A couple miles as-the-crow-flies to the east”, as our guide puts it, a very flat yet devastatingly traumatic scar is scorched across the earth where a mountain once stood. 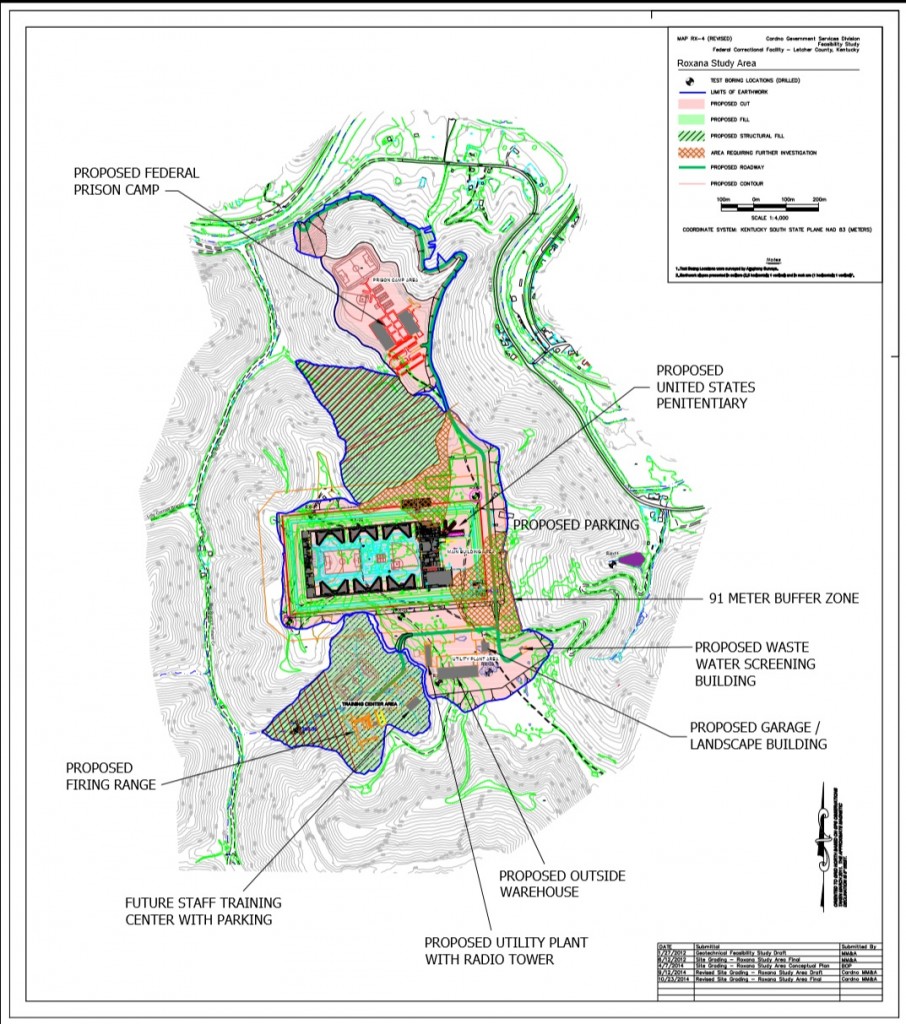 The Bureau of Prisons schematics for the proposed Roxana site from the Final EIS.

The Federal Bureau of Prisons calls this mountaintop removal scar “the Roxana site” and is desperate to rip it open anew by tearing from the ground over 3.8 million cubic yards of earth, extending the boundaries of the scar across 700 acres, so that it may construct one more crown jewel in the bloated war chest of mass incarceration. At a price tag of several hundred million dollars it would be the 6th federal prison in Eastern Kentucky alone, all to ‘alleviate overcrowding’ in a prison system that cages over 2.2 million people nationally, with another 5 million under state surveillance via probation or parole. It is telling that the Bureau of Prisons does not bring up decarceration as a possibility, instead advancing yet another environmentally and socially disastrous prison construction project.
Attempting to get ahead of the environmentally disastrous part of it, in July the BOP released its final 800+ page Environmental Impact Statement complete with public comments on the preferred Roxana site and the alternate Payne Gap site, amounting to little more than a bureaucratic footnote to smooth over construction and provide the illusion of public participation. The Prison Ecology Project, working through the Human Rights Defense Center, submitted a 21 page public comment, signed by 23 organizations and individuals including three professors from Eastern Kentucky University’s School of Justice Studies, on the original EIS draft detailing the documents significant shortcomings. Perhaps unsurprisingly, the BOP largely ignored the concerns we raised and altered virtually nothing of substance between the draft and final EIS (check out the August 31st letter we sent to the BOP in regards to that). Worse though, the final EIS perpetuates two glaring omissions, the extent of which has only come to light after our visit to Letcher County and follow up research. 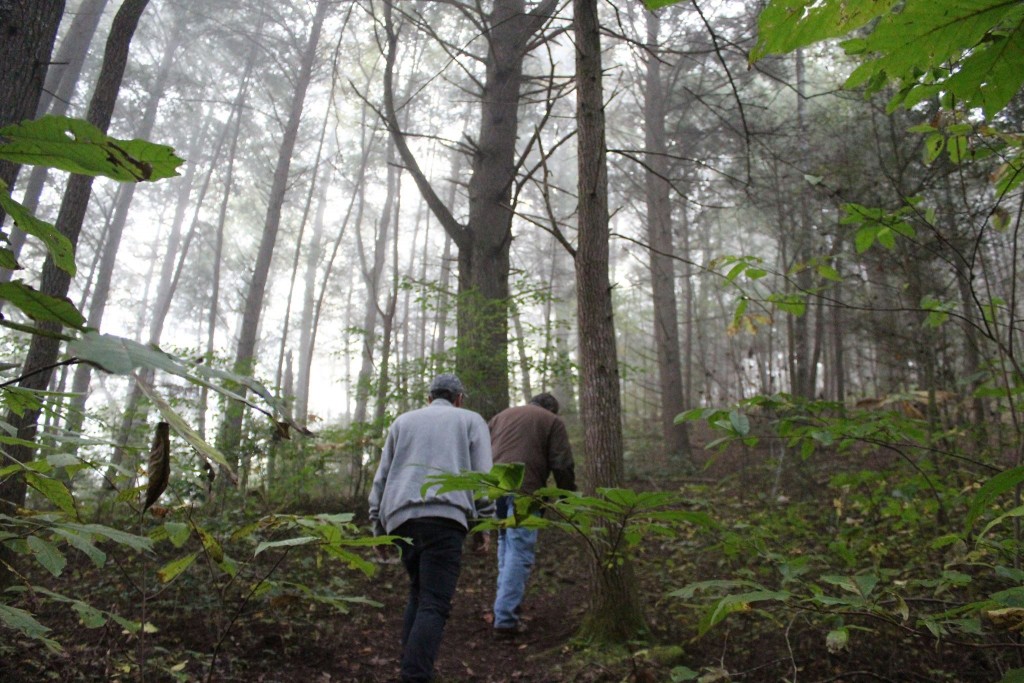 The first omission is that the Lilley Cornett Woods, “a couple miles as-the-crow-flies” from the Roxana site, is entirely absent from the final EIS save for one footnote on our very own public comment. At the time of writing the original public comment we did not realize just how close the Lilley Cornett Woods was to the Roxana site, nor did we realize the environmental significance of its old-growth status. The final EIS gives no mention as to how the massive construction project, extended periods of heavy machinery use (both on site and on the surrounding roads for transportation), the eventual 24/7 flood lighting on the property, extensive noise pollution from the construction and proposed firing range, the impact of 4 million gallons of permitted daily water use (water which must come from somewhere), and copious amounts of raw sewage, might impact the delicate ecosystem of the Lilley Cornett Woods that has, up until this point, been able to escape our society’s voracious environmental destruction. Within two miles of the proposed site it is unequivocal that the networks of flora and fauna extending out from the Lilley Cornett will be harmed by its construction and continued operation.
The second glaring omission and outright falsity maintained by the BOP in the EIS will undoubtedly result in extensive environmental harm and victimization to the potential prisoners themselves (not to mention guards and other prison staff). In response to our original public comment indicating that the BOP has done nothing to address the health impact on prisoners of ongoing mining activity and apparent coal slurry storage in the area, the BOP maintained that they expected no health impacts since the “proposed project is not located near coal mining waste facilities [and] [t]here are no active coal mines on either of the proposed [Roxana or Payne Gap] sites,” further claiming “no [coal] slurry ponds are located within Letcher County,” providing a link to the EPA’s coal ash impoundment regulation website as evidence. 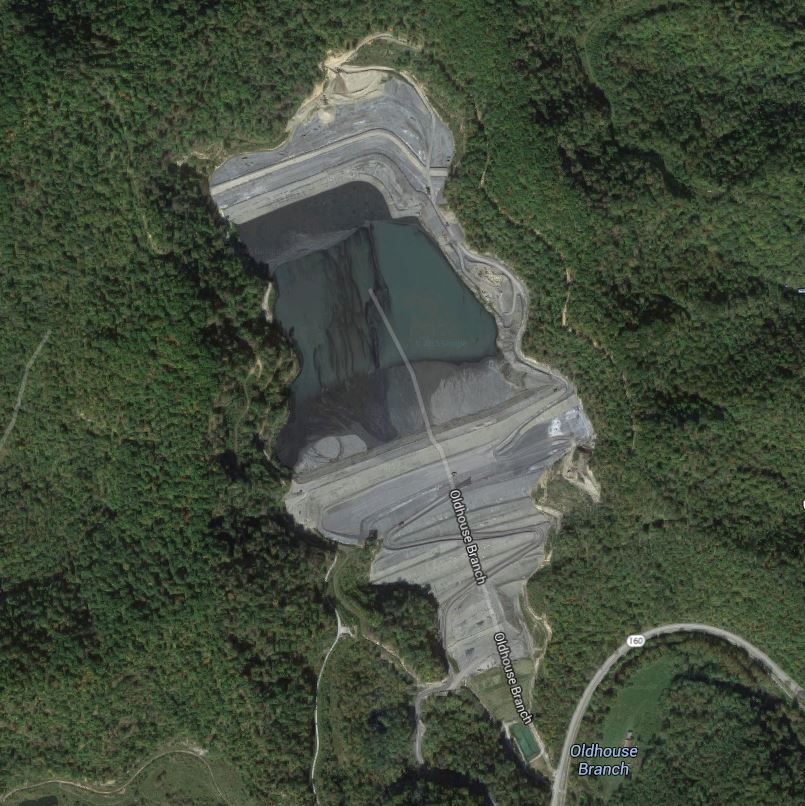 Oldhouse Branch sludge impoundment, Roxana, KY
The only misleading ‘truth’ in these claims is that there are no active mines literally on the proposed sites. Let it be noted that there are no active mines literally on the majority of land in Eastern Kentucky, but somehow that doesn’t stop the region from having some of the highest lung cancer rates correlated to some of the highest coal production numbers. Exploring the Kentucky Division of Mine Permits Surface Mining GIS map quickly reveals that there is an active surface mine under two miles to the northeast of the Roxana site, and additionally an active underground mine a half-mile due south of the Roxana site. Both mines are operated by Enterprise Mining Company LLC (a subsidiary of coal giant Alpha Natural Resources Inc.) and neither are mentioned in the final EIS despite the fact that:

“Numerous studies have indicated that communities hosting coal mining in general, and mountaintop removal mining in particular, are susceptible to increased health hazards. For example, a 2011 study of Appalachian localities found that even after controlling for socioeconomic factors, residents of counties with mountaintop removal mining suffered significantly higher rates of poor physical and mental health than other Appalachian communities. Another study concluded that chronic cardiovascular disease mortality is more prevalent in mountaintop removal areas. A water-quality study published in 2011 found increased concentrations of selenium, sulfate, magnesium and other inorganic solutes in rivers downstream from active and reclaimed mining sites. And a 2010 study of coal mining counties in West Virginia found that, even after controlling for cigarette smoking, cancer mortality rates increased for residents who lived near mining operations.”
- from the HRDC Response to Proposed USP/FPC Letcher County Final EIS, pg. 9 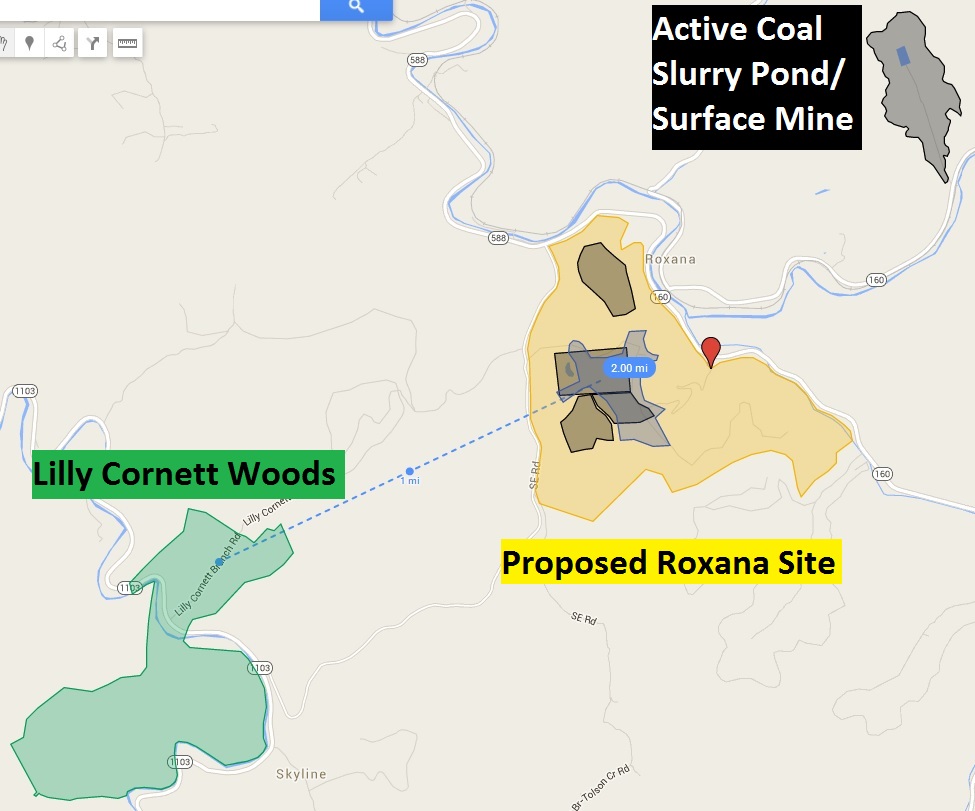 Coal slurry and Lilley Cornett proximity to proposed prison
The BOP’s false claims are further brought to light by data from the Kentucky Division of Mining and information collected by Washington State University graduate student Pierce Greenberg. These sources show that the active surface mine operated by Enterprise Mining due northeast of the Roxana Site is also home to an active coal slurry impoundment that has been operating since at least 1979. Thus, the BOP’s claim that there are no coal slurry ponds in Letcher County is categorically false (the data indicates there are at least 3). Further, the BOP tries to back up this claim by referencing the EPA website, but the EPA doesn’t regulate coal slurry impoundments. That job falls jointly to the Mine Safety and Health Administration (Department of Labor) and the Office of Surface Mining and Reclamation (Department of the Interior), along with state regulatory agencies. Greenberg, who studies coal impoundments and the communities near them, obtained the impoundment data through public records requests to MSHA and the Kentucky Department of Natural Resources. 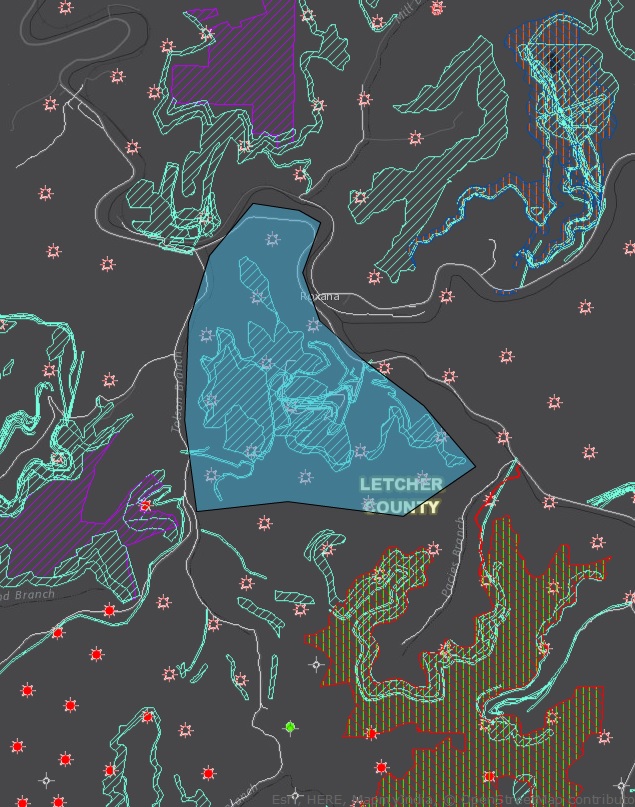 Screenshot from the Kentucky Division of Mine Permit’s Surface Mining GIS Viewer. The light blue Polygon is a rough outline of the proposed Roxana prison site. The dark blue and orange outline at the upper right is an active surface mine and coal slurry impoundment. The red and green outline at the bottom right is an active underground mine.
The oldest active impoundments in the country date back at least four decades and in order to qualify as MSHA-class they must contain 6.5 million gallons of coal slurry mixture at minimum, while the notorious Brushy Fork Impoundment in West Virginia recently received a permit to hold more than 8 billion gallons. Having been in operation for at least 40 years it’s safe to assume that the aging impoundment near Roxana is holding a significantly larger amount of coal waste than the 6.5 million gallon minimum. The potential negative impact of the active surface and underground mine and coal slurry impoundment on the health of prisoners (to be read: environmental victims), again, is left unaddressed and ignored by the BOP’s final EIS. Given that our system of mass incarceration is overwhelmingly used at a vastly disproportionate rate to discipline and cage black and brown bodies, the unwillingness of the BOP to even account for these environmental hazards is indicative of institutional environmental racism that has the potential to cause serious harm and possible premature death to prisoners. 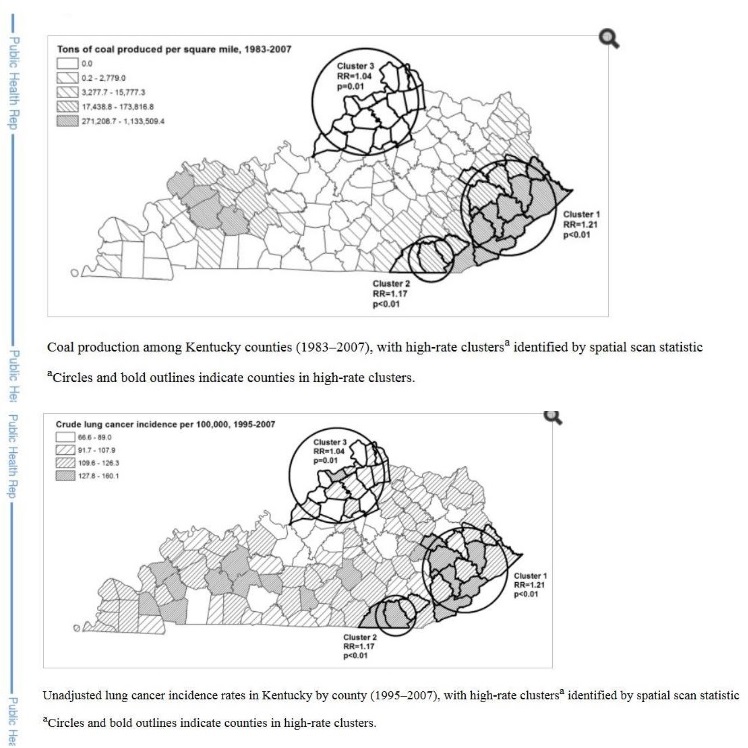 Visualization of high rates of lung cancer and coal production.
Those seedlings in the Lilley Cornett Woods that tasted the earth for the first time so many centuries ago whisper of unrealized worlds, paths down which our society might have walked that was in balance with the environment. The scar scorched across the earth at the Roxana site, however, screams of the destructive path we are still on as it threatens to grow even larger, devouring and threatening the surrounding environment, the Lilley Cornett Woods and the delicate network of flora and fauna it supports, and the very lives of our (overwhelmingly black and brown) brothers who will be caged there. We must not let this be the path we continue to walk. We must take a stand against the Bureau of Prisons and demonstrate how our continued reliance on mass incarceration, the New Jim Crow, both destroys the environment and people’s lives. When it comes to the proposed prison in Letcher County, we have no choice. We must shut it down. 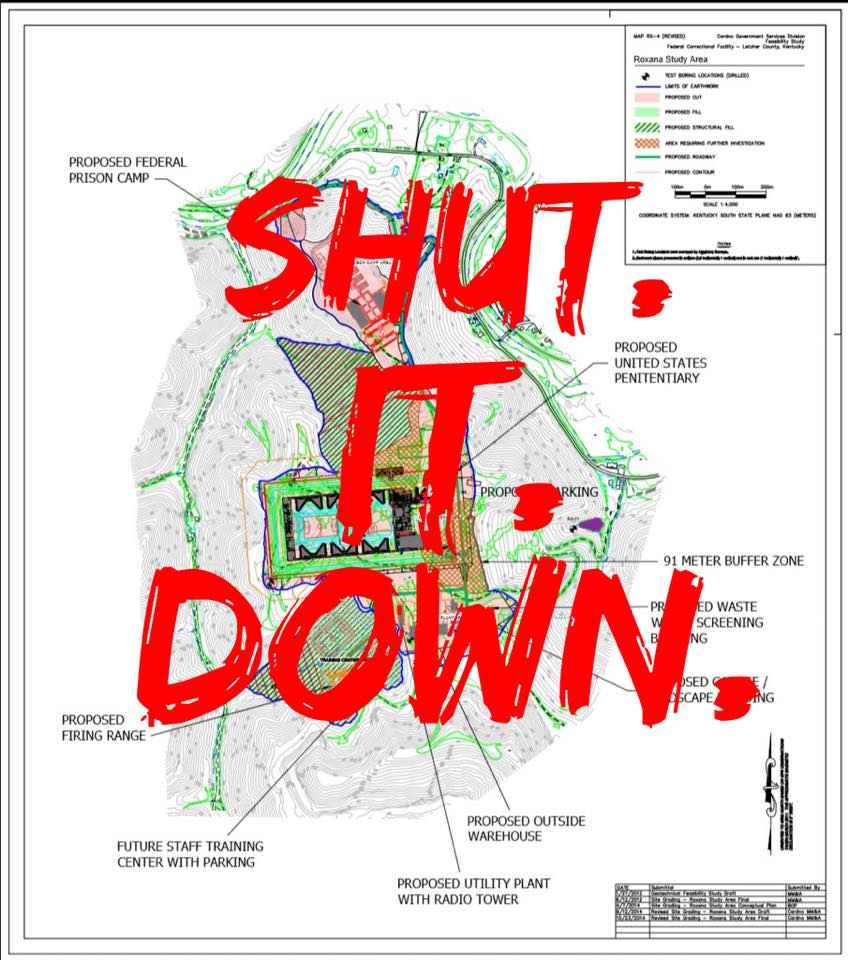 If you would like to help shut down this prison in Letcher County, and all Toxic Prisons, please join us at a national convergence in D.C. from June 11th-13th where we will both strategize on building the campaign and we will take actions against the Bureau of Prisons.
If you would like to get an organizer with the Campaign to Fight Toxic Prisons to talk to your group before the convergence let us know at FightToxicPrisons [at]gmail.com! 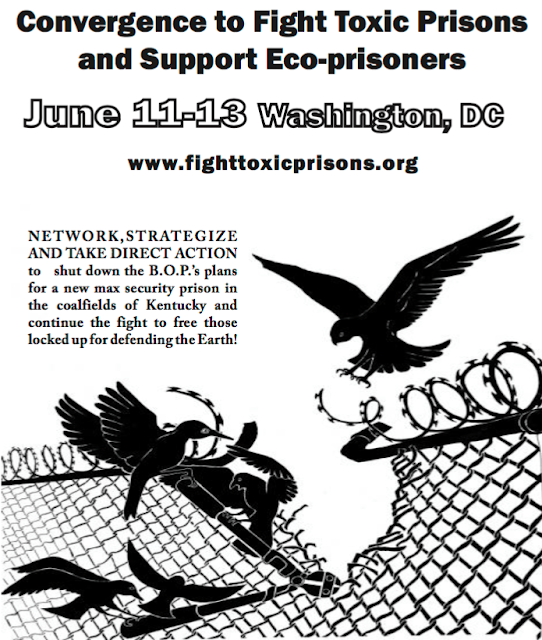