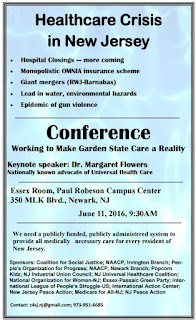 This information is being shared be Decarcerate the Garden State as a public service announcement on behalf of a broad based coalition of organizations that are working to bring a humane health care system to NJ in response to a deadly health care crisis here.  This information is from a flier that was distributed at a recent POP meeting by POP member David Hungerford.

Would be awesome for there to be a far reaching investigation into health care within NJ's prison and jail facilties - a part of the health crisis that is sometimes overlooked.

Scroll Down for Press Release 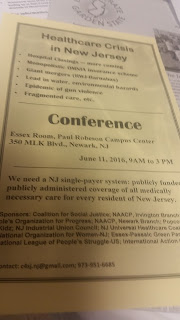 WHEREAS the uncontrolled rise of healthcare costs in the United States continues, with a 5.8% increase projected in 2016; and 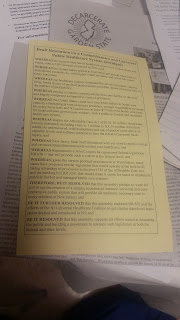 WHEREAS the United States spends at least twice per person what most industrialized countries do, with higher infant mortality and lower life expectancy outcomes;
WHEREAS our healthcare system, dominated by private insurance corporations, limits choice of medical professionals and often denies necessary care in the interest of profitability;
WHEREAS pricing is chaotic, varying wildly from one facility to the next, and hugely overpriced compared to costs of provision;
WHEREAS the United States could save over $500 billion in health care costs by eliminating private insurance providers, enough to guarantee coverage for every American; and NJ could save at least $15 billion in health care costs funded and managed - for local and state government workers, with a publicly health care system;
WHEREAS despite the Affordable Care Act of 2010, 30 million Americans remain uninsured, including close to 1 million in NJ; 39 million American adults are underinsured, with deductibles and out of pocket costs above acceptable levels; and millions continue to face the threat of personal bankruptcy, and
WHEREAS New Jersey finds itself threatened with yet more hospital closings and yet more intensified monopoly control over healthcare; and –
WHEREAS Representative John Conyers has sponsored federal legislation - HR 676 -
that will provide such a system at the federal level; and
WHEREAS given the current political environment in Washington, many states have proposed similar legislation that would operate at the state level, taking advantage of provisions in Section 1332 of the Affordable Care Act, and the pending bill HR 3241 that would make it easier for states to implement publicly funded and managed health care systems;
THEREFORE, BE IT RESOLVED that this assembly pledges to work for and to see the creation of a simple, economical, humane, universal and comprehensive public system that will provide all medically necessary care to every resident of New Jersey; and
BE IT FURTHER RESOLVED that this assembly endorses HR 676 and the efforts of the NJ Universal Healthcare Coalition to get similar state legislation drafted and introduced in NJ; and
BE IT RESOLVED that this assembly supports all efforts aimed at educating  the public and building a movement to advance such legislation at both the federal and state levels.

"The health insurance system does not work and can't be fixed," said Robert Palmer, an organizer  for the conference. "There are long delays because it is so hard to coordinate medical teams. Prescriptions are too expensive. People can't pay for them. Deductibles are sky-high, and there are still too many people without insurance."

"The health insurance system works badly. The experience of Medicare and of many countries proves comprehensive public health gives better outcomes and saves a lot of money."

The event will be moderated by Annette Alston of the Newark Teachers' Association.

The keynote speaker will be Dr. Margaret Flowers of Baltimore, MD, a nationally-know advocate of universal healthcare. She has said, "I view the struggle for health care as part of a broader social, racial, economic and environmental justice movement."

Parent activist Sandra Hayward of the Popcorn Kidz will address the intensification of monopoly in healthcare. David Hungerford of the Coalition for Social Justice will speak on the topic of the damage  that monopoly in healthcare does to the economy as a whole.  Dr. Winthrop Dillaway of the NJ Universal Health Coalition will speak on his organization's campaign to create a single-payer public health system in the state.

There will be ample time for audience participation. "Everybody has horror stories," said an organizer. "We expect to learn a lot."

Resolutions calling for the creation of a universal healthcare system in New Jersey, and others linking the cause of healthcare reform to the cause of peace, and to the struggle to end community gun violence, will be presented to the assembly.

The plenary session will include proposals for ongoing work such as marches, rallies, and speaking programs. A continuations committee will be formed.