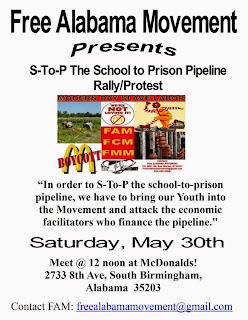 Last week in Newark a meeting was coordinated by Macapinlac Responsible Endowments Coalition to propose a NJ divestment effort targeting prison privatization firms like CCA and GEO as well as other firms that profit off of incarceration through construction and service contracts. Also discussed was targeting of NJ politicians like Menendez and Pascrell who are accepting campaign support from prison profiteers.  In NJ the immigrant detention facilities are run by private prison firms and much of the half-way house facilities as well.  Specific proposals from the new committee will be forthcoming shortly.  See: http://decarceratenj.blogspot.com/2015/05/nj-prison-divestment-movement-being.html


Meanwhile, another corporate target effort has been launched by the Free Alabama, Free Mississippi, Free California and other allied incarcerated led organizations targeting McDonalds.   McDonalds is not targeted because it runs facilities . . . but because it profits off of the use of enslaved incarcerated workers.    See: https://freealabamamovement.wordpress.com/2015/03/24/f-a-m-s-step-3-mcdonalds-initiative-s-to-p-the-school-to-prison-pipeline/ 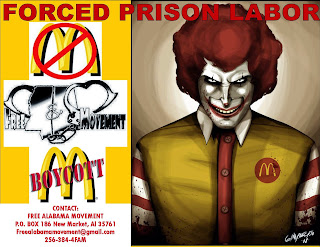 “Join FREE ALABAMA-MISSISSIPPI MOVEMENT UNITED's "S-To-P" Campaign Initiative Against McDonald's to "S-To-P" the "school-to-prison" pipeline.
McDonald's and many other corporations are investing in "zero-tolerance" school policies and other laws that makes it easier to target children for incarceration. Once in prison, McDonald's and other corporations then rely on prison authorities and policies to exploit prison slave labor from those they have incarcerated.
McDonald's uses prison slave labor to produce their uniforms, beef for patties, milk, bread, and plastic spoons. McDonald's builds factories in prisons to exploit prison slave labor, but won't build these same factories in communities where people in prison come from, where unemployment is high and jobs are needed.
Organize a campaign in your State and join us on May 30, 2015, as we DEMAND that McDonald's and their complicit corporate partners "S-To-P" profiting from mass incarceration FOR prison slavery.”

Here is a recent reference to the McDonalds connection: 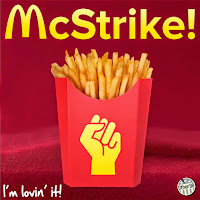 There has been much media lately about McDonald’s falling in popularity and catching some heck – largely due to exploitation of restaurant workers who are paid minimum wage and subject to unsafe conditions, shifting schedules – given the rise of the 15 NOW movement demanding significant rise in minimum wage – that has included McDonalds as a target of its efforts.

McDonalds is also infamous for the unhealthy and non-nutritious nature of its food product.

However the use of enslaved labor has not been a widely reported feature in the recent reports of its slide in popularity and economic demise.

As most decarcerators should know – the 13th. Amendment “freeing the slaves” in the United States made explicit exemption of those who have been convicted of a crime:

The history of incarceration in the United States has always been tied to the use of enslaved labor – for public work as well as contracted out to private interests.  Currently there are a wide range of goods produced and services provided by incarcerated enslaved labor.

The “FREE ALABAMA” and similar movements believes that the power of the strike by incarcerated workers against such production is a powerful weapon and a way that the incarcerated themselves can directly impact and lead the Decarceration fight.  More on the philosophy is in this interview we conducted with leaders of the Free Alabama movement:

While there is much activity on many issues in NJ and there are many initiatives even within our own efforts that need more attention, we should indeed consider developing some strategies in NJ in support of efforts to target corporations that profit directly from use of enslaved incarcerated labor.  Meanwhile, we can help spread the word about the May 30 actions and also explore the feasibility of including information about incarcerated enslavement by McDonalds for profit as 15 Now efforts mobilize to demand a livable $15 per hour wage for McDonalds outside local restaurants.

LET THE BATTLES BE JOINED!
Posted by Bob WItanek at 5:52 PM