Mass Incarceration and the Struggle for Local Control of Newark Schools 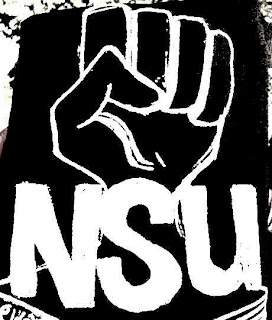 The tremendous outpouring of the totally unified Newark public high school student body shows that Newark has gone around the curve.  Regardless of what happens with Christie, Anderson, NJ state control of Newark schools and media apologies for this total disaster – the writing is on the wall – Newark is changing and the will of the youth, educated, activated, organized, unified, in motion, uncompromising, cannot be averted forever.  The Newark StudentUnion and their allies in NJ Communities United and youth and adults and other organizations have pulled off a historically successful event engaging, "thousands"  even according to NJ DOT COM that has politically opposed the will of the Newark community with a vengeance.


The writing is on the wall. 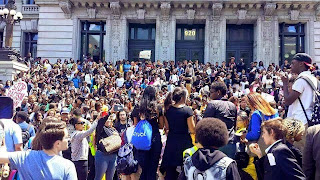 The youth led demonstration today could indeed be one of the most monumental political mobilizations in NJ in recent history.  My guess is that right now there are political and economic forces in NJ and perhaps elsewhere that are to say the least – concerned about the success of today’s event in Newark.

The dilemma for those billionaires and future billionaire hopefuls that want to profit from some of those exploitative practices listed (and many more) is that in order for them to succeed in doing so, they require not only status quo, but the continued concentration of political, economic and social power and control into fewer hands and the continued erosion of freedoms and political power for those groups victimized by such policies.

*The potential threat to that continued accumulation of wealth and power represented by today’s event, and the potential for the movement that is afoot to continue to grow in strength and numbers, sophistication, level of organization, command for the issues and the ability to make the connection to the systemic roots of the issue is not a minor one.*

It is incredibly possible that the today’s event can serve as a trigger for even greater unity across generations, across organizations, across focal points of activist groups, to plant the seedlings of hope that change is not only possible but is starting to occur.  That means that future mobilizations could even be more effective, larger and a greater challenge to business as usual.

Another potential – if the students decide, is that Newark now has the potential to link up first with the youth of the other large cities of NJ and then with the youth of all of the enclaves of super exploitation as well as picking up unity with disillusioned sectors of youth in NJ suburbs, as well as across state lines to Philadelphia, New York City, Baltimore, Chicago and beyond.

Envision for a moment the education going on inside the youth efforts, the cross germination of skills, the study of history of struggle.  Imagine the lifelong impact these experiences are having on the youth participants – today is indeed one of the highlights in the lives of the participants – a glorious day that they can remember and draw upon as they get further engaged in struggle.  Even the naysayers and those that know the system is not working but have given up on themselves, on hope and on the idea of struggling for change cannot be aware of what happened today without filling up with hopeful ideas and the question of doubting their past rejection of the option to struggle.

The system is concerned for sure and they need to get a handle on what is happening.  In Baltimore, after the recent youth rebellion the “powers that be” were able to quickly settle on the option of going after participants (or anyone that happened to be in the wrong place at the wrong time) with arrests, high bail and the threat of lengthy prison terms.  In Newark, since this protest was peaceful and orderly – that option is not readily available – but it is no doubt front and center on the mindset of those that are charged with maintaining power relationships.
Mass incarceration is indeed one of the main reasons that the privatization efforts in Newark, Camden and throughout the US in major cities is so far along, it has undermined the communities ability to resist these kinds of encroachments.  In Newark it is one of the reasons why the most serious challenge is coming from the young people – because so many the next generations on up are entangled with legal challenges, debts, probation, parole or outright locked up.

I have always maintained that the primary motivator of mass incarceration in the US is to disempower super oppressed communities, to strip them of their ability to effectively organize and resist, thus leaving their communities the cities where they reside open to plunder and exploit.

But there is a crack in the wall right now – Newark has unified with the youth at the helm.  The youth have shown their sophistication, their rejection of attempts to compromise their principles.

What NJ DOT COM neglected to report that this is a quote of Assata Shakur, freedom fighter, community organizer, former Black Panther who is living in exile in Cuba after escaping from a prison term after she was almost killed by police and then prosecuted in a sham trial for the death of cop that occurred during that incident that she was not responsible for.

While the powers that be continue to vilify Assata Shakur and are trying to interfere with the move toward normalization of relations with Cuba over Assata Shakur, the youth of Newark (and at demonstrations across the country where this famous quote is chanted) are looking to her legacy as an inspiration for system challenging struggle.

For our part, organizations and activists throughout NJ need to stand in solidarity with the Newark students and make sure there are no discipline measures or attempts to criminalize their activities.

We need to also recognize the importance of our struggle against mass incarceration – imagine if there were not 35000 NJ residents in state and local prisons and jails in NJ – imagine if they were back in the communities and joining efforts like today’s monumentally historic event.  The ability for the super wealthy to continue to accumulate wealth and power would be set back.

I hope that our organization and other decarcerators can have an opportunity to engage the youth of Newark in a discussion on the issue of mass incarceration.  I also would like to urge our membership and supporters to figure out how we can get behind and with the Newark people and the Newark youth in this struggle.
The type of unity shown today is exactly what we need to do to show the powers that be that they need to take seriously our initiative of the NJ Decarceration Act and other measures to COMPLETELY AND SWIFTLY overturn mass incarceration in NJ.  It is not only about the freedom and liberation for the incarcerated and relief for their families – but it is about the political, economic and social empowerment of super oppressed communities – to mount systemic challenges like the one mounted by the Newark Students Union, the youth of Newark, NJ Communities United and so many other organizations and supporters that made today successful.