Decarcerate the Garden State, a statewide effort, needs to bring our Decarceration effort to the local level often by looking at how local administrations manage policing, local ordinances and how such policies can either help reduce incarceration or exacerbate the problem.  We have launched a petition drive in Bridgeton NJ and will be circling back there shortly to gather signatures and make a presentation to the council on the topic.  The petition launch led to this reporting of our effort:

We happened across a report coming out of Paterson NJ – the city passed a strict ordinance outlawing “loitering” on the streets of Paterson.  The law includes a loose definition of loitering that states that it could be applied any where the loitering can be construed as a problem.

The Paterson city council is Black / Latino - I bet they would consider themselves on the side of Decarceration.  Yet they implement this draconian local policy that does not help the situation and will only contribute to it.  Here is the page for the local city council: https://www.patersonnj.gov/council/#members

Per the news story the development appears to be driven by the demands of local store owners.  It quotes people sayng they are afraid to go past loiterers to go to stores and store owners saying they are losing business.  The report talks about large numbers “hanging out.”

Council member McDaniel, the apparent spokesperson for the new law states that it “shouldn’t be like that” but he does not really get at the reasons as to why it is like that – only offering the ordinance as a solution.  Per the report, the ordinance will also act as a tax on the impoverished who end up with a summons per the ordinance with a $2000 fine and / or community service penalty. While it might not have been intentional, McDaniel referenced protecting quality of life of “citizens” – which per the demographics of Paterson, which has a large number of immigrants, is exclusive language toward the non-citizen portion of the community.

Chilling also is councilman McDaniel’s reference to the law as giving authorities a “tool in their arsenal to deal with (the loitering issue).”  Perhaps a simple bad choice of words but using weaponized war terminology as a reference to dealing with the impoverished out of work community members is minimally unfortunate.

The report mostly focused on the point of loitering “in front of stores” as the cause of the ordinance but it is apparently arbitrarily defined so it can be enforced “any where it becomes a problem,” including in front of homes in residential areas according to the report.

Media did not reach out to any of the so-called loiterers or to any youth or any advocates of justice or activists for their views.

Posting the link to the report on this development on our group page for Decarcerate the Garden State (joiners welcome, here is the link: https://www.facebook.com/groups/DecarcerateNJ/) touched off a lively conversation.  Here is some of the commentary that came in.

Debi Madaio, a medical worker involved in support for improvements to NJ’s medical marijuana policies, had this to say about the new loitering ordinance in Paterson, NJ: 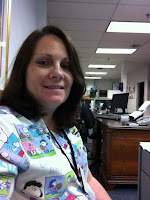 “I work in Paterson and it is crazy....so many people who are homeless, people with substance abuse problems and people with such complex medical needs that are just in and out of the hospital....There is such a need in this community...but so little resources.......Catholic Charities does it's best but it just isn't enough.....These people need help....not more restrictions placed on them.

There is a large population of undocumented individuals who are unable to apply for medicaid and medicare also. It wouldn't be a Friday at the hospital if we were not making arrangements to discharge a gun shot wound. A lot of poverty, a lot of violence and gangs. A lot of disease and despair.  It is overwhelming sometimes for me as a nurse because there are not enough resources out there. And of course there is a big homeless shelter there Eva's Kitchen Idk where the people that stand outside there are suppose to go if they are homeless and can not loiter....because it is loitering if you have no money in your pocket also correct ?

“It is a vicious cycle....these people do not need to be arrested they need help with their addiction or mental health issues We get them in the hospital and discharge them right back into the street it is disgusting and you know they are going right back to that same circumstance.  By the time the people are homeless on the the street or addicted to something it is hard .....education is the key ......put some money into the schools and after school programs and mentors." 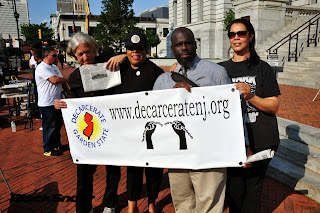 Akbar McEntyre is a local resident and advocate involved in support for those returning to the community from incarceration.  Asked to comment, he offers:

“I believe that this is an attempt to criminalize individuals for no other reason but for being displaced/homeless, or just socializing in their neighborhoods. This is similar to the post civil war vagrancy laws that helped to form the Black Codes- criminalizing people for having no where to go. We have bigger monsters to attack in Paterson.

Responding to the councilman McDaniel quoted in the news report, Akbar MeEntyre adds:

“It is ironic that the councilman at the time had no real solution to the problem. Considering Paterson is a densely populated city with very complex issues related to how it was designed. There are very few places you can go, and not see people congregating in public. The easiest thing to do is charge people, fine them, and generate revenue from people, who if they had money, probably would not have been caught in this situation. Where are the tangible solutions to these problems? Any answers?” 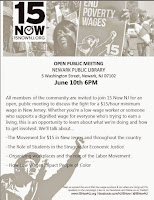 Lizbeth Ramirez, from the steering committee of the 15 NOW NJ movement demanding a statewide $15 per hour minimum wage had this to offer:

“This is another example of fascism at its best. The bosses want to impose this ridiculous ordinance knowing full well that the working class people cannot and will not be able to afford this outrageous fine. More reason to up-up mass racist incarceration and increase militarization of police. Why not fund community programs to help deal with the impoverishment the citizens of Paterson constantly face especially at a time when employment is so scarce? What are the politicians missing here? I also think they are trying to instill fear in the people purposefully in order to carry out their agenda to continue militarizing the police.”

Clearly this ordinance is a draconian response to the issue of so-called loitering that is not only the product of issues of addiction and mental illness, but is driven by massive unemployment, under employment and lack of viable employment, lack of activities and just neighbors being neighborly.  The idea that it can be enforced in front of residencies opens up the spector to neighbors pulling chairs out of their 100 degree apartments and chatting out front being shaken down by over zealous cops.

What can possibly go wrong?

Decarcerate the Garden State would likely support efforts to roll back this ordinance – it is the kind of law making that multiplies mass incarceration at a time when we are trying to fight it.  If folks are interested, we can put together or support a petition for starters – and we are certainly interested in working with the Paterson community on holding a Decarceration meeting there in Paterson.
Posted by Bob WItanek at 5:36 PM