The acquittal of the white police officers who fired 137 shots killing an unarmed black couple in Cleveland is one more reason why everyone should attend the Million People's March Against Police Brutality, Racial Injustice, and Economic Inequality on Saturday, July 25th in Newark, New Jersey. Click on the link below to go to the Facebook page for the march. "Join" it, "Invite Friends" to join it, and "Share" it.

The People's Organization For Progress (POP) is continuing the fight for justice and the reinstatement of Marylin Zuniga, the Orange, New Jersey school teacher who was terminated because her students wrote get well letters to prison inmate Mumia Abu-Jamal. POP is asking everyone to write letters condemning the decision of the Orange Board of Education to terminate her and to demand her reinstatement. The letters should be sent to:

Patricia A. Arthur, President
Orange Board of Education
C/O School Board Secretary
Orange Public Schools
451 Lincoln Avenue
Orange, New Jersey 07050
SEND YOUR LETTERS AS SOON AS POSSIBLE. In addition, POP is asking people to condemn the decision to terminate Marylin and to demand her reinstatement at the Orange Board of Education meeting in June and to also attend the June meetings of the Orange City Council and the Essex County Board of Freeholders to solicit support for Zuniga. The specific dates and times for those meetings will be announced next week or people can call POP at

Mumia was able to call his wife this morning at 9:30 am.   Wadiya Jamal spoke with Mumia for 15 minutes by phone.  He remains at the hospital.  She reports that he said he "sounded very good."  He was receiving multiple tests.  He also said his sores were "fair to middling" which if you know Mumia, it means he is still having a hard time walking and that while they are not oozing they remain very painful.   He had a fever over the weekend and was kept at the hospital because of it.

He was not able to use the phone while in the infirmary (before his transfer to the hospital on Tuesday) because his legs were so sore he could not walk to the phone in the day room.

Just to be clear.  This call today was one 15min phone call.  No visits are being allowed, yet.  Also the PA Department of Corrections is blocking Mumia from seeing or talking with his attorneys and anyone else, including his doctor.

Bret Grote, (Abolitionist Law Center) and co counsel Bob Boyle are going to federal court to challenge this constitutional violation of their clients access to counsel.  We will send out information as soon as it is filed.

Keeping Our Eyes on Mumia

Please stay in touch for further updates.  Please keep calling. There will be a press conference held at the Geisinger Hospital in Danville PA on Wednesday. If he is transferred back to the Prison SCI Mahanoy in Frackvile, the press conference will likely be there.  Look at www.freemumia.com and their facebook page for the latest information on demonstrations.  And please keep calling. Also you can check www.prisonradio.org as well.

Clearly Mumia needs an immediate diagnosis, and then a competent treatment plan.  Please join us in keeping Mumia alive, and then seeing him free.
>p.s. The phone called happened because  folks took action and called, faxed and emailed.  Thank you - Prison Radio.
_____________________________
Call, write, fax continue to keep the pressure on demand freedom & medical care for Mumia:

As one prison radio listener said to us in an email:  “It maybe be easier to get Mumia released from prison than get him health care inside prison”.  We agree that it is past time for Mumia Abu-Jamal to be released.  He has served 33 years, (30 on death row).  His conviction needs to be overturned, and he needs to be freed immediately. 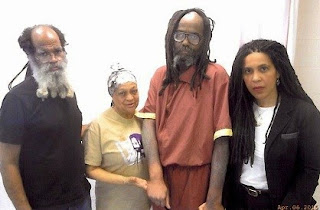 Note:  The hospital has Mumia on a "confidential" list so the operators will say they have no one named Mumia Abu-Jamal or Wesley Cook at the hospital. People should tell the operator that their call should be reported to the hospital administration and use both names.

Questions and comments may be sent to claude@freedomarchives.org

Friends, I need your help. In response to the epidemic of police murders of unarmed people, most of whom are black, a call has gone out for a Million People's March Against Police Brutality, Racial Injustice, and Economic Inequality.  It will take place in Newark, New Jersey on Saturday, July 25, 2015. To get a million people to attend the march we must at least invite a million people. Facebook is one way to do this. Please go to the Million People's March Against Police Brutality event page on Facebook. Please tap "join" to indicate that you are going, and then tap the "invite" icon to invite your friends. Your list of friends will come up and then you will have to tap each one to have them invited. I know this sounds tedious but I have about a thousand friends and it only took me a few minutes. Also, you can only invite about 500 at a time. So, I had to do half the first day and the other half the second day. Is this too much to ask for all those who have been unjustly killed by the police? The scourge of police brutality, murder, and terror cannot go unanswered. If we work together and do this we could possibly have a history making event which would help build the movement against police brutality. Please join the page and invite your friends today. Don't wait. Do it now. Thank you.


If Malcolm X had not been assassinated today would have been his 90th birthday. Malcolm was born May 19, 1925 and he was murdered on February 21, 1965. It is an amazing thing to consider that Malcolm X is not just a towering historical figure but that fifty years after his death he is still one of the most popular, most admired, most followed, most listened to, and most quoted black leaders of our times. I am glad that the spirit of Malcolm X is alive and well among us in the 21st century. However, I also believe that it is extremely important that we deepen our understanding of the ideas and philosophy of Malcolm X. Anyone who wants to be active in the struggle for black liberation in particular and revolutionary social transformation in general must study the views and ideas of Malcolm X.  Knowing that a person's thinking evolves I believe that it is particularly important that we know what Malcolm was saying and thinking at the end of his life. In this regard I urge people to read what Malcolm himself actually said. So, I recommend the following books. People should start with February 1965: The Final Speeches. I would also recommend Malcolm X Speaks, By Any Means Necessary (the book) and Malcolm X On Afro-American History. There are others but these provide a good start. In terms of how Malcolm was trying to put his ideas into practice I would also recommend From Civil Rights To Black Liberation: Malcolm X And The Organization Of Afro-American Unity by Dr William Sales. Malcolm X was a revolutionary.  At the end of his life he was trying to build an organization and a movement to change this nation and the world. He was a revolutionary black nationalist, Pan Africanist, and internationalist. He was an advocate of black self-determination, self-defense, and self-reliance. He wanted to bring an end to racial inequality, oppression, and exploitation. He was a militant opponent of racism, capitalism, colonialism, and imperialism.  Please keep in mind that we study the ideas of Malcolm X not only to have a more informed and enlightened discussion but to put them into practice in order to transform the society in which we live into a more just and equitable social order, and in the process transform ourselves into better human beings. Long live the memory of Malcolm X. Power to the people!
Posted by Bob WItanek at 3:22 PM