Currently meetings are dedicated to organizing for the Million Peoples March Against Policy Brutality, Racial Injustice and Economic Inequality on July 25, 2015.  Meetings usually feature guest speakers on pressing local, state and national issues, discussion and updates on POP projects and efforts as well as business reports.  All are welcome.

CONTINUING THE FIGHT FOR MARILYN ZUNIGA

The People's Organization For Progress (POP) is continuing the fight for justice and the reinstatement of Marylin Zuniga, the Orange, New Jersey school teacher who was terminated because her students wrote get well letters to prison inmate Mumia Abu-Jamal. POP is asking everyone to write letters condemning the decision of the Orange Board of Education to terminate her and to demand her reinstatement. The letters should be sent to:

Patricia A. Arthur, President
Orange Board of Education
C/O School Board Secretary
Orange Public Schools
451 Lincoln Avenue
Orange, New Jersey 07050
SEND YOUR LETTERS AS SOON AS POSSIBLE. In addition, POP is asking people to condemn the decision to terminate Marylin and to demand her reinstatement at the Orange Board of Education meeting in June and to also attend the June meetings of the Orange City Council and the Essex County Board of Freeholders to solicit support for Zuniga. The specific dates and times for those meetings will be announced next week or people can call POP at973-801-0001. 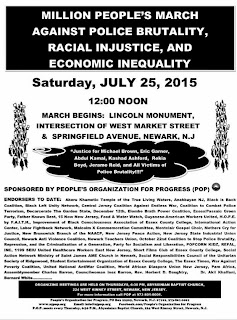 The acquittal of the white police officers who fired 137 shots killing an unarmed black couple in Cleveland is one more reason why everyone should attend the Million People's March Against Police Brutality, Racial Injustice, and Economic Inequality on Saturday, July 25th in Newark, New Jersey. Click on the link below to go to the Facebook page for the march. "Join" it, "Invite Friends" to join it, and "Share" it.

I want to commend the People's Organization For Progress (POP) membership recruitment street team under the leadership of Field Marshall Steven Hatcher.  On Saturday, the team was on Broad and Market Streets in downtown Newark.  Team members Brad, Doug, Nat, Tyrone, Jimmy, Alfreda, Ellen, and Steve were on the scene.  They recruited 51 new members yesterday. And the week before they recruited 52 members.  They are doing outstanding work. Membership recruitment is the most important task in building our organization. While I recognize the efforts of the team I also want to say that membership recruitment is the responsibility of every member of People's Organization For Progress (POP).  Every POP member must make an effort to recruit members. I also want to urge all POP members to volunteer and spend some time helping out the POP membership recruitment street team. The team is on Broad and Market in Newark every Saturday. The team needs and would like your help no matter how much or how little time you have to give.  I want the team to know that that it's efforts are greatly appreciated. Thank you for all that you have done for POP.  Keep up the great work. Power to the people!!!


People's Organization For Progress
Posted by Bob WItanek at 7:11 PM