NJ Weedman Arrested for Posting on the Internet

Ed Forchione, aka NJ Weedman a leading advocate for ending cannabis prohibition in NJ was arrested May 13  on the charge of posting on the internet.  The details will be forthcoming and a video is expected about what happened.  This information will be updated accordingly as the details emerge. 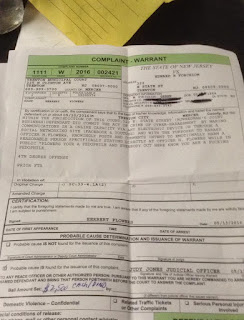 This case is of interest to Decarcerate the Garden State.

It means that what we say in this medium, blogging, etc. can be criminalized and you can be arrested for a youtube or a comment or a blog meander.

When we in Decarcerate the Garden State oppose mass incarceration - it is not just a matter of how many are in prison etc.

The politicians all to one extent or another bemoan that we got "too many prisoners" and most of them at least in their own mind got some kind of "decarceration" (or reform etc) kind of scheme in the back of their minds.

Meanwhile they pass law after law that criminalizes trivial matters . . . a comment in facebook or a youtube posting . . . or droopy drawers violation or a walking while texting or a tossing a cigarette butt and stepping on it or selling looseys - not even cannabis but tobacco.

The use of this cyber charge should serve a warning for everyone that expresses their opinions on the internet which is likely a very significant proportion of the 8 year old and up . . . population.

Mass incarceration can be at anybody's doorstep in a flash and it is everybody's issue.

It is important to oppose these charges even if you might not agree with every thing that Weedman has ever said (I am sure many would not agree with everything I say - no offense to Ed intended) because tomorrow something you posted somewhere or even a PM that you did not even put out there for consumption got shared or hacked or something . . . or picked up by routine government eaves dropping on every single byte of data we pump into the internet and phones - whether we click <enter> or not . . . gets construed as a violation of some over abundant law against routine NJ and US resident behavior.

We could be at the cusp of some insidious crack down on dissent - that could widen concentrically.  We need to understand that when it comes to political imprisonment - it is important to call for freedom and oppose repression even if the persecution is of someone whose opinions might differ from yours in one small way or another - as no 2 people have the same exact political opinion.

I think we also have to take note of the kinds of behavior that the government is choosing to crack down on and let that advise ourselves in how we present our fight - so as not to invite unnecessary repression. That is not to justify the repression in any way at all but to suggest that we might need to start being very careful if this cyber prosecution should widen.

This is an important matter that must concern us all.

To support defense:
https://www.indiegogo.com/projects/liberty-bell-temple-support-defense-fund--2#
Posted by Bob WItanek at 9:14 PM