An Apt Political Response to the 12:1 Ratio from Elected Officials

Sample tweet:
12:1 Ratio - what the pols must do to fix: Immed Commutations! #DecarcerateNJ http://bit.ly/29dt2bp

So the NJ politicians of both political parties are probably hoping that the attention dissipates on the Sentencing Project report that identified NJ as having the very worse ratio in the nation of the probability of ending up incarcerated – with Black NJ residents 12 times as likely to be incarcerated in NJ as white residents.

They are hoping that maybe by passing some legislation that might minimally address the issue going forward they can get by without a complete reconciliation of how NJ got to this reprehensible point.  It is up to Decarcerate the Garden State members, allied organizations and individuals of like mind to seize the initiative.

As we pressed forth on Thursday, June 30th with leafleting at the Essex County Superior Courthouse at 50 West Market Street in Newark – our leaflet called for racial score cards for prosecutor’s offices, courts and police precincts (text ) – we need to organize a full court statewide press along these lines.

Showing signs of weakness, when we showed up to communicate to defendants and their families outside the court, a plain clothes man from inside the building immediately came out and walked over to two uniformed sheriff’s officers stationed outside and directed them to remove us off the site (see press release with video of the encounter). 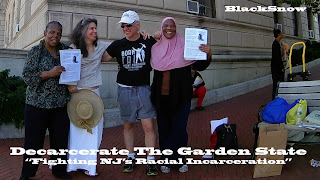 That did not stop us from distributing 100s of fliers and NJ Decarcerator papers to defendants and passers by in the neighborhood – garnering much community support and a not too shabby vid-cam-soap box presentation by a local gentleman.  We have spoken to interested attorneys and organizations and might be filing some paper work to establish our right to communicate to defendants on publicly owned “county” property about the racial factors that often go into NJ criminal “justice” related decisions in prosecutor’s offices, police precincts and courthouses.   This is information they might need before accepting a plea for 5 – 10 years on something that if anything should be much shorter.

We also have a right to organize defendant families into support networks that watch dog incarceration conditions, oppose mass incarceration, call for prison reductions and an end to prison enslavement on public property in front of the courthouse which is the proverbial Main Street for much of NJ’s Black America.  Of course, having this message being stated clearly in front of the Courthouse could begin to interrupt this cozy little arrangement in NJ that has existed for decades in spite of the demands coming from every corner for “less prisoners” and the outcry over the propensity of the USA to jail its own citizens and residents at rates 4 times as high as the rest of the world (which the US likes to lecture about freedom).  That could explain the probably illegal behavior of Essex County sheriff’s department of restricting democratic free speech rights on June 30.

So as we are beginning to do our job to hold NJ accountable for this 12:1 figure – calling for immediate remedies – most important of which is *immediate commutation relief for those whose current incarceration was subject to application of racial factors in any stage of their encounter with police and the ‘criminal justice’ system.* 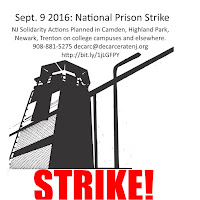 Elected Officials
As we make that demand, it is the job of elected officials to participate in its implementation.  Each and every one of you (I assume at least some elected officials are going to read this) have an absolute imperative to become familiar with the list of incarcerated residents and citizens that herald from the district that elected you.  You need to come up with a way to review their cases – each and every one of them – and not just for innocence or guilt – but to examine all of the racial factors that were applied at any stage of their being taken into the fold of ‘criminal justice.’  You can not take this charge lightly and you need to err on the side of safety if you are going even begin to address that horrendous 12:1 incarceration probability ratio that puts NJ at the *very top* of the list.   Pull their cases and have your legal team of interns, clerks and attorneys study the cases looking for aspects of racial influence on the outcome – every step!  While you are at it – you might as well look through the white files as well because as wrought with injustice as the criminal justice system it is your responsibility as elected officials to assure is just – you will likely find flawed cases there as well that merit sentence commutation relief.

Commutation for currently incarcerated
Now for the rest of us . . . everybody please – this is important and it could help you and your family.

Right now is the time!  Those officials I was talking to in that lengthy paragraph up there?  They need your help IMMEDIATELY.  If you believe that anyone you know, a loved one, a family member, parent, child, spouse, sibling, cousin or even just someone you knew in school might have been subject to application of racial factors at any one or more steps of their march through the system to sentencing and incarceration, we will help you draft a letter to your elected officials.  Your local council, your state officials and the governor.  They are responsible for this racial catastrophe of the 12:1 ratio – they can not just blame the criminal justice system since they they govern it– it is their responsibility for having turned their back on these operations and allowing that 12:1 ratio to develop.

We have an article about how to do this in the newspaper The NJ Decarcerator and it is at this link.

We Want to Help You Fight for Your Loved Ones' Freedom!

If you need our help – we can interview you about the process and help in the drafting of the letter.  We will help you figure out who needs to get the letter.  If you decide to publicize it (totally your decision) we can help figure out how to publicize it – if you want it on our blog site – if you want to set up your own justice blog.  (We can give you an authorship on our site for that purpose.)

I can not urge the importance more – this needs to happen immediately.   We need to POUNCE on the 12:1 issue – not to let the elected officials and their allies paper it over.  This issue needs commutations to start today and continue until every vestige of the racial impact on the current mass incarceration situation is eliminated.  That could mean immediate commutations in some cases, it could mean sentence reductions and automatic parole in other cases.   It could even be a demand to end abuses and neglect of the needs of incarcerated who have been subject to these racial factors.

Can everyone work with us on this?  Please spread the word – house to house – network to network, on the phone,  e-mails, texts, word of mouth, on the corner, etc.  Decarcerate the Garden State wants to help you determine how best to advocate for remedy for the racial impact to the incarceration of your loved ones.  The more the elected officials hear of these individual cases – the more they will realize that there is no proverbial rug big enough to sweep the dirt under – the more they will have to at least make it look good and in some cases maybe actually start to deliver some commutation sentencing relief.

General Support Not Specific to Individuals that are Incarcerated

Meanwhile, write a letter to your elected officials and send them this link.  Tell them you agree.  Tell them you want them to review their incarceration constituency and assist in identifying candidates to recommend for sentencing commutation relief.  This is a potentially pivotal Decarceration moment in NJ history – let’s seize it!

Sample letter for general situation if you do not have specific cases.

You should send this to NJ Senators, Assembly members, the Governor, your local mayor and council or committee members.  If you need help figuring out who to send it to, just contact us 908-881-5275 / Decarc@DecarcerateNJ.org .  If you e-mail to them, please Cc- Decarc@DecarcerateNJ.org .  Let us know immediately if you need help with ANY of this!  (State e-mail addresses are below)

Please see the article from Decarcerate the Garden State.

As a member and supporter, I agree with the premise that we need  immediate sentencing commutation relief for any and all those incarcerated in NJ’s prisons and county jails and all that are facing trials whose interactions with NJ’s criminal justice system – which you as an elected official are ultimately responsible for – has been tainted by racial factors in criminal justice decision making by police and / or government officials.

We will work with you in advocating for these remedies to begin to correct the damages that have been done to our families, our communities and our entire state by the racially motivated decision making in administration of policing and criminal justice in the state of NJ.