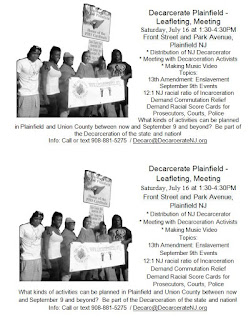 At the invitation of some local Plainfield residents, Decarcerate the Garden State plans to hold an educational event and leafleting this Saturday, July 16, 1:30 to 4:30 pm.

The event will include:

The group also hopes to record audio and video for use in a music video featuring the group’s song Nine Nine Decarcerate which can be viewed on You Tube at the following link.  Decarcerate the Garden State is especially urging youth to attend to make the music audio and video recording successful.
https://www.youtube.com/watch?v=z9mwsA_oACA

They will also be circulating the petition co-authored by Decarcerate the Garden State and the organizer of local "Equality" marches against recent killings around the country by police which calls for the local Plainfield Government to take several steps to aid the decarceration struggle.


Decarcerate the Garden State co-founder and organizer of the event Bob Witanek states:
“Like many communities impacted by poverty with a large percentage of Black and Latino residents, Plainfied is a community devastated by mass incarceration.  Given that it is clear racial factors are being employed by those hired by the state, county and local governments in prosecution offices, courthouses and police departments are deploying racial factors – resulting in the nation’s worse ratio of probability between Black and white likelihood of incarceration, 12:1 – it is perfectly logical that this event will be held in Plainfield.

We have a significant number of local residents that have expressed interests and through our outreach in the housing developments in Plainfield we heard several first hand reports about how the racial factors in NJ’s criminal justice administration is impacting the local community.  We hope that Plainfield residents can be made aware of the event through media and local communications and so that Plainfield can help in the fight to correct these problems with solutions that can benefit the city as a whole.”

Witanek stressed the importance of youth involvement because it is the youth that are being subjected to “life interrupting incarceration.”