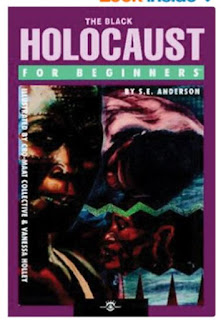 The Contemporary US Prison-Industrial Complex is the evolution of Chattel Slavery.

Because ever since its invention of chattel slavery, capitalism always needed and still needs cheap labor and a group of people to blame for all the bad stuff that happens in a capitalist society. The 13th Amendment was the result of a 19th Century “compromise” between the minority Northern Industrialists and the majority Southern Landed Aristocracy.

Yes, all people of African descent are now emancipated from chattel slavery. BUT, the 13th Amendment stated that if one is incarcerated, then one is enslaved! Thus, what we witnessed from the Post Civil War 1860s onwards until this very moment, the disproportionate imprisonment and criminalization of Blackfolk all over the US. The Post Civil War   Southern Landed Aristocracy not only got most of their land back, they also introduced a peonage form of exploitation which directly fed into a prison system that legally bound the prisoner as enslaved.

Billions were made from this arrangement. Even some norther industrialists benefitted from this form of enslaved labor. look at, for example, early 20th Century Bethlehem Steel in Birmingham, Alabama and its use of prison labor to do all of the hazardous shitwork in mining and blast furnace work. (See Blackman’s Slavery By Another Name).

And as time went on, it became normal within the US for both the ruling class and the ordinary citizen to see Black and Brown men and women as criminals-by-birth. Hence, postVietnam criminal laws designed by Congress and three presidents accelerated the increasing numbers of incarcerated Blacks and Latinos far beyond any ratio seen in any other nation.

This Prison Nation reality is a source of cheap labor for the capitalists. They will not give it up without a fight! And that fight must come to them from our communities in coalition with the various progressive prison abolition and prison reform organizations and individuals.

The decriminalization of a Race can only come thru the combined cultural, political, economic and moral battles against racism/white supremacy and its capitalist buttress.

Sam Anderson
Author of The Black Holocaust For Beginners

Editor's Note:
Decarcerate the Garden State and Peoples Organization for Progress Call Upon All Organizations and Individuals that Believe in the Struggle for Justice to Join in Solidarity with Multistate Prison Work Stoppage Being Organized for September 9 in Prisons Around the US.