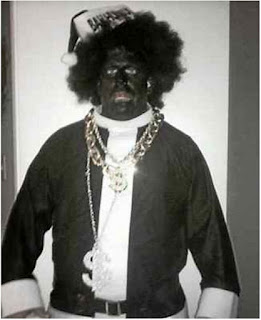 
This is how the newly elected Executive VP Michael Gallagher of the PBA 105 NJ corrections officer's union went to a party 5 years ago.

It is an image this leader of the organization that represents the corrections officers that over sees the treatment and well being of 30,000 plus NJ incarcerated in state and county facilities thinks is ok.

This organization is on the polar opposite of our decarcerating work.  They have a vested interest in continuing NJ's mass incarceration and the racial disparities that bolster NJ's incarceration numbers.  The more incarcerated - the more members for their organization, the more dues from their membership, the more OT extra dollars in the pockets of their membership.  Police and corrections unions play a major role in influencing NJ's criminal justice policies - lobbying and more importantly - delivering the candy to the bought off politicians of both political parties that maintain this 12:1 state - in the form of campaign contributions and election endorsemeents.

The corrections union wants to continue to operate with impunity behind the walls of the facilities where they can get away with murder, neglect, abuse, dehumanization, torture and the rest.

As we move our struggle to Decarcerate the Garden State forward we need to recognize who our opponents are . . . what their mindset is.  That better informs how we conduct and organize our struggle.