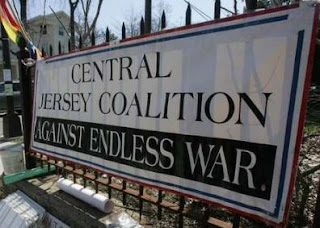 June 6, 2016
Decarcerate the Garden State Team:
The Central Jersey Coalition Against Endless War  stands in solidarity with the incarcerated and enslaved and supports their fight for justice through actions around the country in September.
On September 10, 2016, the Central Jersey Coalition Against Endless War will host a Marc’s Place Coffee House focusing on mass incarceration and the unjust system some call criminal justice.  We plan to have guest speakers who have first-hand experience with incarceration and can describe current struggles in the prisons as well as the history of struggles around decarceration in the United States.  The event is open to the public.
We also hope to assist with related struggles and activities that are being organized in September.
The Central Jersey Coalition Against Endless War is committed to the struggle against the endless, unjust wars waged by the United States, which destroy civil liberties, kill soldiers and civilians, and hugely benefit ‘defense’ contractors and other war profiteers at the expense of the working people of the world.
We came together in the fall of 2002 during the lead up to the invasion of Iraq. We organize vigils, protests, educational programs, coffeehouses, and legislative activities against the war in Afghanistan and Iraq, the threat of war against Iran and elsewhere, and the occupation of Palestinian territories. Through these activities, we also defend immigrants and civil liberties. We stand on the side of human rights for all and join with others working to end the current austerity drive, degradation of our environment, and attacks on human dignity.
Therefore, we stand in solidarity with the work of Decarcerate the Garden State.
Central Jersey Coalition Against Endless War www.againstendlesswar.org
Posted by Bob WItanek at 6:58 PM