Panel Discussions, Meeting Speaking Opportunities and Other Meetings – All Over NJ! 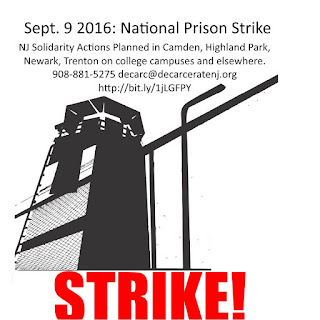 This article will serve as the minutes of the meeting of Decarcerate the Garden State that occurred tonight, June 28 with James Turner, Shulonda Smith, Jim Brash and myself in attendance.

MEETINGS / DISCUSSIONS ALL OVER NJ!
Jim Brash at the meeting effectively stressed the need for our September 9 efforts to do a better job of spreading out across the whole state through panel discussions, leafleting and street organizing and other events, attendance at organizational meetings and other means to explain our Decarceration fight and the meaning of the September 9 events.

We need everyone to help with this.  If you are part of an organization or are connected to one and get get us an audience at a group meeting where we can explain these issues and get your involvement – please contact us IMMEDIATELY 908-881-5275 Decarc@DecarcerateNJ.org .
It was also stressed at the meeting about the need to engage more organizations in the process of organizing and participating in promotional activities for the September 9 effort.  We have several powerful statements from organizations and individuals – we need to leverage those statements and we need to engage the 100s of organizations in the state.  We have a historic moment to make this Decarceration effort front and center in NJ – both because of the September 9 organizing and also because of the Sentencing Project report and the 12:1 figure where NJ has *the very worse* incarceration disparities of all states in the nation (a Black NJ resident is 12 times as likely to be incarcerated as a white NJ resident).
LEAFLETING THURSDAY JUNE 30 1:30-4PM NEWARK SUPERIOR COUIRT 50 W. MARKET STREET: FIGHT NJ RACIAL DISPARITIES IN NJ SENTENCING

The importance of this Thursday’s (June 30, 1:30pm – 4pm) leafleting effort outside the Essex County Superior Courthouse at 50 W. Market Street in Newark NJ was discussed.

Our primary purpose is organizing the families and those in danger of incarceration. We are also doing this to send a message to the prosecutors, police, judges, attorneys and the system in general that status quo racial factoring into criminal justice decision making in NJ has to come to AN ABRUPT END . . .And those that have been subject to such racial determinations in their "punishments" need immediate relief - sentence commutation.
The process of over charging to force plea to a deal for excessive years HAS TO STOP NOW - TODAY! THURSDAY! INCLUDING IN THE MATTERS BEING HEARD THERE AND THROUGHOUT NJ!

This activity is a blueprint - hopefully we will get several leafleting sessions out in front of each and every county courthouse in the state between now and September 9 and then thereafter.

If you can not make this Thursday but might be available at another time - contact us 908-881-5275 - Decarc@DecarcerateNJ.org  - also if you want to get involved at another courthouse around the state.

PAPER AND FLIER DISTRIBUTION AT NORTHERN STATE PRISON JULY 9
James Turner is working on organizing events around the North Jersey State facility on Doremus Street in Newark.  We tentatively scheduled leafleting and NJ Decarerator paper distribution to families visiting their loved ones there for Saturday July 9 – details to be announced.  We will use the opportunity to get a feel for how to organize around the site and determine the access to visitor traffic for face to face organizing.  Stay tuned for more details.

EAST ORANGE ORGANIZING
Shulonda Smith will be distributing NJ Decarcerator papers in East Orange.  She is also looking into a possible location for a Decarceration organizing discussion in East Orange.

SPIKE THE STRIKE – EVERY FRIDAY!
At least week’s meeting (June 21) we discussed making Friday’s SPIKE THE STRIKE AGAINST ENSLAVEMENT days for the purpose of encouraging all participants and supporters of the September 9 shut down to promote a FRENZY of social network activity – by forwarding links, memes. Articles, event information but also doing organizing by phone, person, etc. around September 9.  Since September 9 is a Friday – a spike as we count down each week closer to the date will help realign our forces.  We are going to promote this idea in NJ and throughout the country.  To make it fun we are going to encourage participants to count how many internet and other actions they have taken since the prior week and to post the number in the event.
We will continue to meet each Tuesday, via phone, the next meeting occurring Tuesday, July 5.

ONE ON ONE PHONE CONVERSATIONS
We have a lot going on with this but this will not be successful without your active participation in all aspects of planning and participation.  We will be looking to talk directly with each of you individually to discuss how to better engage your participation in the planning and events.  Call us today to get on board 908-881-5275.  You can also text your number and let us know hwen is a good time to call you,