Support for Sept 9 Prison Strike / Solidarity Needed from Prominent National Leaders #DecarcerateNJ http://bit.ly/25JH0tY
Anyone who has contacts with prominent national figures - prominent activists who have a following - let's start approaching them with letters inviting them to write statements supporting September 9 on a national level (as well as our NJ efforts).

Why shouldn't there be national unity in the US around September 9? We need to call out the politicians of both parties that only provide lip service about "too many prisoners" and symbolic small scale amnesty - while mass incarceration stays largely intact.

I feel like momentum is building but we have not pushed the organizing drive around the bend - we need to get everyone on board - especially since September 9 is almost on the eve of the November elections.

I have sent some letters out - I am not going to say to whom because the point is not to put people that are doing good work on the spot - but to organize some more national attention.

Here is the letter I am using: 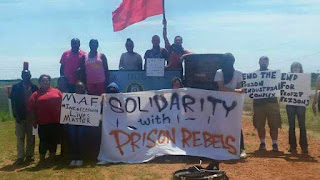 Please consider this a formal invitation to endorse the September 9th Solidarity with the Incarcerated and Enslaved.  See:

as a nationally known figure you might consider endorsing the September 9 activities on a national level (there will be activities in at least several states that date).

We appreciate if you can make every effort to expedite and finalize the approval and submit a letter confirming co-sponsorship.


Do you think you can have this completed by next weekend or sooner?