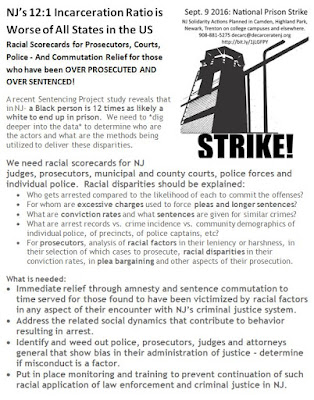 A recent report of the Sentencing Project has revealed that NJ has the worse racial disparity of all states in the US, with Black residents having a 12:1 probability vs. white residents to end up incarcerated.  In response, Decarcerate the Garden State has developed a flier that raises these concerns.  The plan is to hand the flier out along with our newspaper, The NJ Decarcerator, outside
Superior Courthouses around the state of NJ.

We are hoping for a team of 4 - 10 to handle the effort through more are certainly welcome.

The more participants we get - the more approach points of the courthouse we can cover.  Ideally we would have teams of at least 2 and one should be ready to film any encounter with police that should develop.  We will figure out the best way to cover the entrance and approach points from the sidewalk to avoid any excuses of authorities to try to trample our democratic First Amendment rights.

This will be a trial run - we hope we can do this often and at all of the county courthouses in the state.  Let the battle be joined!

Formation of Defender Mothers (And Others) Committees:
http://decarceratenj.blogspot.com/2016/06/defender-mothers-and-others-mutual.html


NJ’s 12:1 Incarceration Ratio is Worse of All States in the US
Racial Scorecards for Prosecutors, Courts, Police - And Commutation Relief for those who have been OVER PROSECUTED AND OVER SENTENCED!
A recent Sentencing Project study reveals that in NJ– a Black person is 12 times as likely a white to end up in prison.  We need to *dig deeper into the data* to determine who are the actors and what are the methods being utilized to deliver these disparities.

We need racial scorecards for NJ judges, prosecutors, municipal and county courts, police forces and individual police.  Racial disparities should be explained:
·        Who gets arrested compared to the likelihood of each to commit the offenses?
·        For whom are excessive charges used to force pleas and longer sentences?
·        What are conviction rates and what sentences are given for similar crimes?
·        What are arrest records vs. crime incidence vs. community demographics of individual police, of precincts, of police captains, etc?
·        For prosecutors, analysis of racial factors in their leniency or harshness, in their selection of which cases to prosecute, racial disparities in their conviction rates, in plea bargaining and other aspects of their prosecution.

What is needed:
·       Immediate relief through amnesty and sentence commutation to time served for those found to have been victimized by racial factors in any aspect of their encounter with NJ’s criminal justice system.
·       Address the related social dynamics that contribute to behavior resulting in arrest.
·       Identify and weed out police, prosecutors, judges and attorneys general that show bias in their administration of justice – determine if misconduct is a factor.


·       Put in place monitoring and training to prevent continuation of such racial application of law enforcement and criminal justice in NJ.