Most recent meetings minutes:  Never produced - will be incorporated to these minutes

We will ask POP to assist in coordinating Newark.  The proposal is to have an event at the county jail and if there are resources available – possibly a car pool over to the state facility on Doremus for a 2nd rally.

The proposal is to have an hour or so with representation of justice related issues per the Black Lives Matter / UMIO groups. and the other hour would be the issue of cannabis related concerns with the 25000 arrests - the machine guns in the street at the Joint - both groups would also be supporting the strike of prisoners and the other demands of the day - free political prisoners (the cannabis section might also call for release of all cannabis prisoners and immediate dismissal of all pending citations and pending fines), 50% reduction of NJ prisoners - we maybe will add something about the Sentencing Project NJ twice as bad as rest of country in racial disparity. And improved conditions in NJ facilities - we hope to have specific details about that. The issue of the curfew might also be addressed.

What has been discussed so far is possibly some sort of rally at the County Jail in Camden.  I have been invited to a community meeting by John Royal though it is not completely scheduled yet.  Hopefully at such a meeting the proposal can be announced and improved upon and the process of fine tuning what exactly Camden does can commence.  Is full city mobilization possible?  Leafleting projects.

Bridgeton
Would it be better for Bridgeton to go to Camden or to do something locally in Bridgeton at the Cumberland County Jail (where there have been jailhouse deaths).

Everybody interested in making this happen should pick one of the events being proposed or offer another idea that they are willing to work on in a different area.  It could be easier to get more people involved by having events that people do not have to travel a distance to.

On as many campuses as follows, have leafleting and newspaper distribution at the campus cafeterias, covering as many cafeterias and as many meals as feasible.  (Up to 5 copies given to anyone expressing especial interest – clipboards to take names, contact info of interested students.)

Decarcerate the Garden State officially or unofficially is not encouraging any high school student walk outs at this time.  Youth must assess any risk of participation in these events and probably should get support of their parents should they choose to support this call in any way.

Activities leading up to Sept 9

Newark, meetings possibly at library, South Orange, AFL, Friends, elsewhere?
Leafleting projects?  Planning meetings in Trenton.   Meetings between two groups.
Who can invite us to speak at a meeting, event or help plan a special meeting for this purpose?  The more the merrier/ 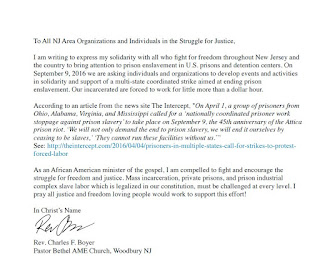